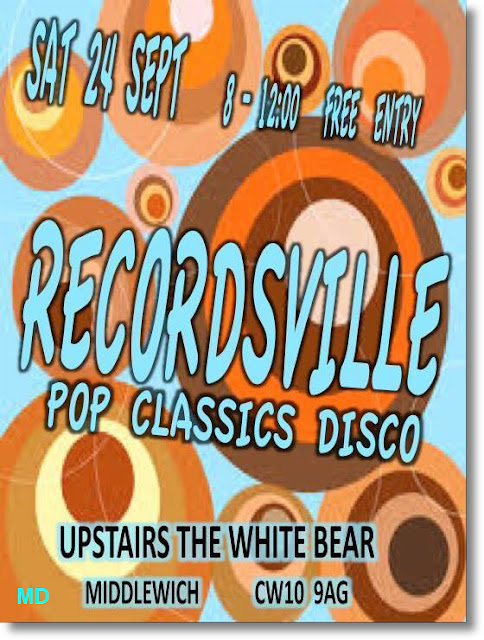 Posted by SALT TOWN PRODUCTIONS at Sunday, August 28, 2016 No comments:

We're much indebted to DAVE GRIFFITHS for permission to use this fine old Middlewich postcard which he recently came across and posted on the Northwich & Mid-Cheshire Facebook Group.
Dave was looking for information as to the scenes depicted here, and also to the approximate date of the postcard.
As to the date, we were able to help almost immediately, as this postcard is one of many featured in the collection which Geraldine Williams loaned to us a few years ago and which we will be featuring in the Middlewich Diary soon.
Geraldine's copy was sent from 39 Booth Lane, Cledford, Middlewich on November 27th 1911 to a Mrs J Twiss in Sandy Lane, Lymm.
Middlewich postcards, like other postcards of the time, had a very long 'shelf-life'. This card would, in all probability, still be on sale in the town twenty years later, until the changes of the early thirties, including the replacement of the old Town Bridge by the current structure, rendered it obsolete.
Of course, most of the scenes pictured here were also available at the time as individual cards.
Here's a coloured version of the Town Bridge postcard, from the afore-mentioned Geraldine Williams collection (follow the link for a comparison with the view in the present day).
And here, courtesy of Kath and Barry Walklate, is a photo of the Bullring, as shown in the centre of Dave's postcard, at around the same period. That famous gas-lamp, though, where our Town Crier used to stand, seems to be different in each photo.

Dave also took the trouble to scan the other side of the postcard, thus giving us even more insight into the time it was produced, and posted.
If you look carefully at the extreme left-hand side, you'll note that the card was published by 'W. Clarke, Stationer, Middlewich' which gives us a clue to its local origins. Remarkably, though, if you look at the top right hand side, in the square reserved for a postage stamp, you'll see that the card was, unexpectedly perhaps, 'printed in Saxony', an ancient area of Northern Germany, famous for its printing expertise.
Presumably the Great War which came a few years later will have put paid to this connection
And so to the  actual message on the postcard.
It's addressed to 'Miss Maggie Bailey' and comes from her 'affectionate Mother', who appears, from what she says, to come from one of the mill towns of Lancashire or Yorkshire.
She says it it is 'Right(?) country here, not many shops but no mill chimneys'. Which could be considered strange because the one thing Middlewich had in abundance between the late nineteenth century and the late 1960s/early 1970s was factory chimneys.
In fact, for a small industrial town, it had more than its fair share. At the time we are speaking of, there would have been at least twenty at the various salt works around the town.
Dave Griffiths says that the writer may well have been specifically referring to 'mill chimneys', which were usually a lot taller and more imposing than salt works chimneys.
Or, it may have been that the writer of the postcard was staying not in Middlewich, but somewhere on the outskirts, and so missed out on seeing our chimneys?
On the other hand,she does say that she will be visting the Wesleyan Chapel that evening, and that was quite definitely in Middlewich.
There is one further possibility, which we'll put forward, even though it might sound a little fanciful: Although many of the salt works in Middlewich were, for historical reasons, close to the town centre, it might have been possible to visit the town, and even spend a night or two here, without noticing them. Some of them were in Brooks Lane and would have been inconspicuous if you didn't venture as far as the Town Bridge; the Pepper Street Works would have been  hidden behind the shops in Wheelock Street and might also only have been apparent to someone venturing away from the town centre.
The same thing might apply to the other works which were, at the time, dotted around the town - on the Sandbach Road, off King Street and close to the canal in Webbs Lane.
But it still seems a little odd for someone to have actually spent any amount of time here, in what was a very industrialised little town, and not seen them. Or, indeed, noticed (and smelled) that all-pervading sulphurous coal smoke which was a hallmark of this town right up until the late 1960s.
Just a thought.
We welcome your comments and observations on this fascinating piece of local history.

Nick Colley adds (on the Northwich and Mid-Cheshire Group):

Just to add a little to this, the back of the postcard shows that it was published by W. Clarke, Stationer, Middlewich.
This was William Clarke who was a newsagents and stationer at 2 Leadsmithy Street. He was certainly there for the 1901 census and 1911 census and in the 1910 Kelly's Commercial Directory all of which ties in nicely with the 1911 date already suggested,.
Maggie Bailey's mother must have gone into the shop on Leadsmithy Street to purchase the postcard.
Also the little box where the stamp goes has 'Printed in Saxony' this confirms the date as being pre WW1 as of course once war broke out British postcard publishers stopped using printers in Germany!

THE VAULTS, DEWHURSTS AND VERNON COOPER 1970 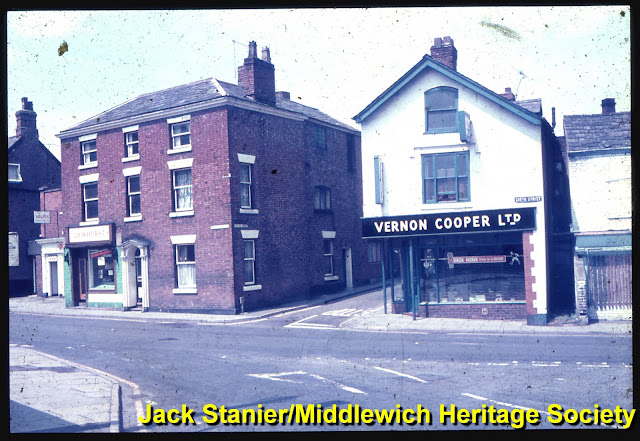 This excellent photograph by Jack Stanier will help us clear up any remaining confusion about the Vaults and its car park. On the  extreme left is the building currently housing two hairdressing shops - Razor Sharp and J et Cie. Immediately to the right , and set back from the road, we can just see the frontage of The Vaults. The part of the building fronting onto Wheelock Street at that time was an off-licence, and beyond that were the notorious 'Black Bar' and, at the end of a long corridor, the vaulted bar which gave the pub its name. Alternative access to the pub was provided by a passageway which ran from  Pepper Street (behind the Dewhurst building) to the pub's back door.
(Editor's note: According to Bill Eaton (see comment below) this is incorrect and there was no back entrance to The Vaults at that time. So the current back entrance to the pub must only have been created in the 1970s, after the demolition of the surrounding buildings.)
The next right, of course, is Dewhurst's butchers and its associated house (it is not clear whether the house was accomodation for the butcher or under separate tenantship). Then we can see the very narrow Pepper Street which led away from the town centre to Seddon's Salt Works, Powell's clothing factory, the telephone exchange and, ultimately to Webb's Lane. The Dewhurst's block was demolished to make way for The Vaults' car park.
Then came Vernon Cooper's TV, Radio and Electrical, a close rival in every sense of the word for Harold Woodbine TV and Electrical which was only a few doors away until it moved to number 28 Hightown in what is now the Church of England's 'drop in centre'. The  business,by the way, is no longer there,but now operates from Sandbach.
There are many points of interest in the Vernon Cooper Shop. Firstly, it is obvious from comparison with older photographs that this is the same building as the old 'Black Bear Inn' - the distinctive window over the 'Vernon Cooper' sign being the chief indicator.

There are signs on the outside of the building advertising long-lost brands from the golden age of domestic TV and Radio - FERGUSON is one and EKCO Radio & TV another - EKCO being a contraction of EK Cole, a radio manufacturer of Southend-On-Sea.
If you look carefully into Vernon Cooper's window you can see why we have been able to pin this photo down to the year 1970. An advertisement there reads 'BACK HOME', the slogan of that year's England World Cup team and goes on to say something  like 'Choose Us For Colour' or 'Cheer Us In Colour'.  Does anyone know exactly what it does say? Colour TV had started three years earlier, in 1967,on BBC2 and in 1969 on BBC1 and Granada.
Finally, it would be nice to know something of Vernon Cooper himself. I recall hearing many years ago that he had something to do with motor racing, but present-day Googling brings up nothing but talk of Welsh Rugby Union Players. 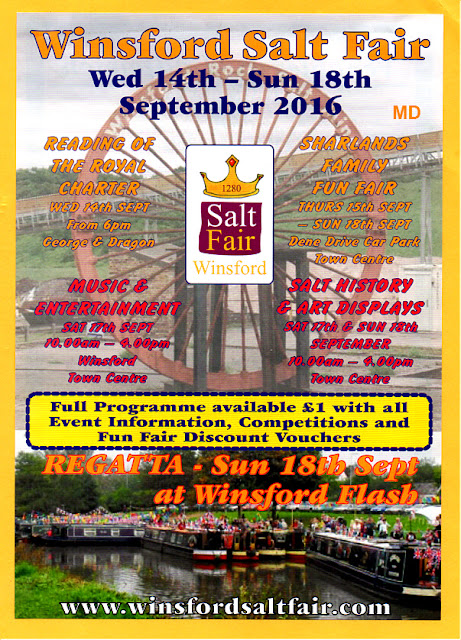 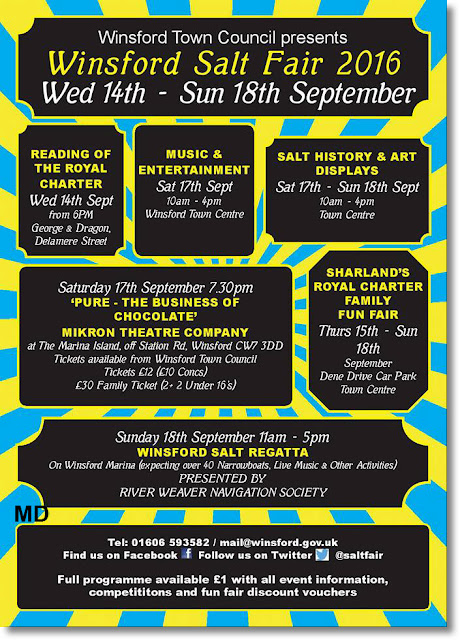 MUSIC IN MIDDLEWICH: SONGS FROM THE SHOWS AT THE ALHAMBRA, 7th OCTOBER 2016

Posted by SALT TOWN PRODUCTIONS at Sunday, August 07, 2016 No comments:

Posted by SALT TOWN PRODUCTIONS at Thursday, August 04, 2016 No comments: 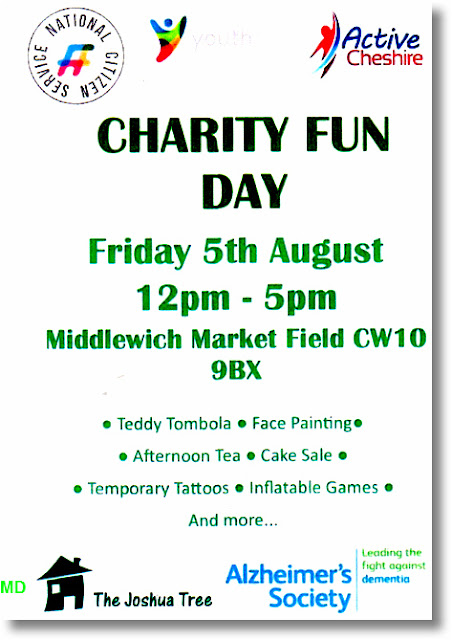 From our friends at the

Posted by SALT TOWN PRODUCTIONS at Tuesday, August 02, 2016 No comments: