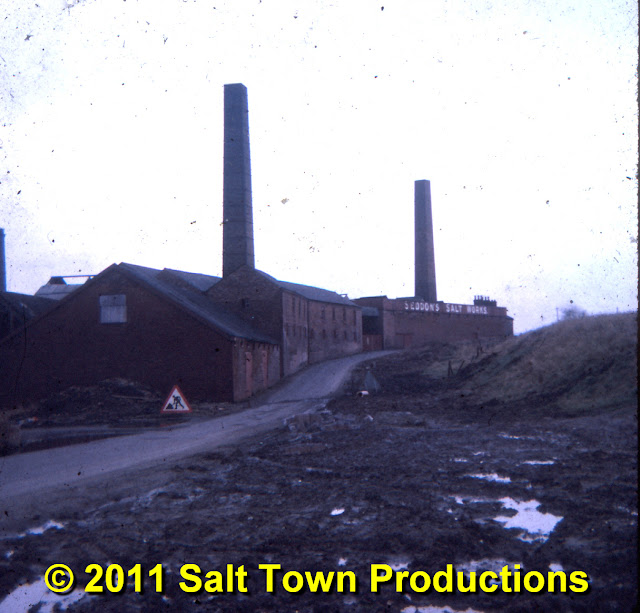 It was a headline in the 'Middlewich Chronicle' in 1967 which inspired this series of slides. I well recall my Dad showing the front page to my Uncle Jim: CUT LUMP SALT WORKS TO CLOSE said the headline, over an article which told us all that the three remaining Seddons Works were to be closed down (Murgatroyd's had closed a year before, in 1966). It was decided then that, as big changes were on the way, they should be recorded. We decided to buy a Kodak Instamatic camera. These little cameras were all the rage at the time and, though far from the best you could buy, they were relatively cheap and very easy to use. They also gave very good results with Kodachrome film cartridges. We always thought the square picture format was a bit strange, particularly as the film in the cartridges was actually standard 35mm. This is one of our earlier efforts; Seddon's Salt Works in Brooks Lane in 1969, two years after closure.


This picture was first published on Facebook on 7th May 2011

The original Feedback is below and is well worth reading.

Colin Derek Appleton The old Brooks Lane !!! a bit of this original road still exists behind the tank wash. My dad grew up in a house which stood opposite these works roughly about where you can see the Seddons logo, there was a row of canal side cottages which were demolished late 40's or early 50's by which time my dad had moved up to moss drive.


Dave Roberts Seddon's works in Pepper Street and Wych House Lane have vanished from the face of the earth (although there is a gateway into the lawned area below the Salinae centre off Wych House Lane which once formed part of the works) but the Brooks Lane works is still recognisable as a former salt works. Much of the brickwork of the outer walls, for example, remains and currently gives protection to Tarmac Readycrete. In the right background you can see the lettering on the water tanks reading 'SEDDON'S SALT WORKS'. The signwriting was done by craftsmen from Wych House Lane.

Colin Derek Appleton I remember as a kid sitting on the canal bank watching the steeplejacks knock the last of the chimineys down brick by brick, starting at the top of course !!!!

Dave Roberts ‎...and out of sight to the right, behind the embankment, is a small spur off the Trent & Mersey Canal (where the canal makes a right-angled turn to descend towards the town centre). This was originally a loading bay, served by a tramway from the salt works across the road. It will have fallen into disuse when the railway came along, but still exists today as a dry dock.


Geraldine Williams  Fred Dibnah would have had a field day...! (Did once see him in the Boar's Head tho')

Ian Murfitt Demolishing brick by brick from the bottom is much quicker. When I was a kid they demolished the Burwell brick factory near my home in the fens. Being remote they chose to blow it up. Being the fens we had a brilliant view from 7 miles away. KERBOOM ! What more could an 8 year old boy want?


Geraldine Williams Nah! Fred + fire + klaxon + 'Did you like that?' : Priceless!


Dave Roberts We've more of Seddon's chimneys to come (of course). but here's a thing: a fellow I was talking to in the Kings Arms one night in the 1970s, who had been born and brought up in Middlewich and knew the town 'like the back of me hand' was prepared to bet me anything I liked that all of Seddon's chimneys were round rather than square. Isn't it funny how the mind plays tricks? I didn't take his money. Or more likely he wouldn't give it to me...
And talking of Fred, I was watching a re-run of the Fred Dibnah Story on Yesterday recently, and it was noticeable that, in most cases, he never had time to blow his klaxon, being too busy running for his life to avoid being engulfed in tons of bricks.
The last episode was entitled 'Approaching Sixty' and I sat smugly watching the now somewhat aged Fred talking about 'slowing down' and 'taking things a bit easier'. Poor old Sod, I thought. Then I suddenly realised how old I am myself. Bummer.


Ian Murfitt People think that he parped the horn to warn by standers that the chimney was falling actually, it was a signal to the pub on the corner "I'm still alive..Get em in!"


Jonathan Williams And of course the Murgatroyd's brine pump was sited just to the east of the tankwash and exists to this day. The Town Council, led by our Heritage Officer Kerry Fletcher is working up a Conservation Management Plan for the pump and its housing as we speak. There will be a very interesting display and exhibition at the Town Wharf during the FAB Festival 17-19 June. It is the only known example of a pump remaining in situ, ie sitting over its shaft. Piecing the past together.....it's not just a strapline...for Middlewich Town Council, it's a philosophy. And quite right too !!


Dave Roberts‎...it's a very good strapline, too, though. I did an audio job for Kerry a while ago, editing and transferring to CD an interview George Twigg (he of Salt Museum fame) did with one of the pump's operators in about 1967, after the works had closed but the pump was being used to pump brine up to the Murgatroyd's Works in Booth Lane (recently demolished). In the background can be heard the sound of the pump operating and, amazingly, the sound of trains passing by on the Sandbach-Northwich Railway, at least one of them steam-hauled. It's great to be able to preserve these little moments of history.

Posted by SALT TOWN PRODUCTIONS at Saturday, May 26, 2018