BEFORE THE MIDDLEWICH DIARY: GEORGE ROBINSON 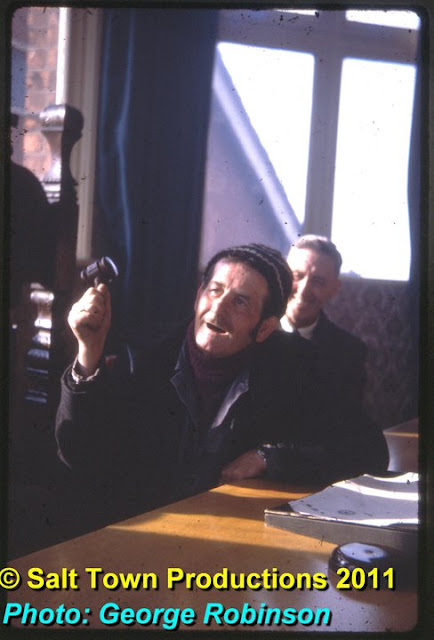 Dotted throughout these photographic memories are shots of what I like to call 'Middlewich personalities' (largely for want of a better word) and here's one of them.


George Robinson gave me some slides early in the 1980s of himself and his cronies from the dustbin gang (refuse disposal operatives, I mean) messing about in  the sacred confines of the Council Chamber.

Here George wields the Chairman's gavel. Ironically, he actually did become a councillor in later years.

For those who have not yet penetrated this Holy of Holies, the window behind George is the back window of the Council Chamber, and the roof glimpsed through it is that of the Civic Hall.*

Editor's Note: As far as we can ascertain this slide never found its way to the Middlewich Diary, and we're pleased to be able to show you this photo of 'Scampy' (or was it 'Scampie', or even 'Scampi'? We'll probably never know.)
Given that this slide, along with the others in the series, was given to us in the early 1980s, in all likelihood we're seeing George as he was in the early to mid-1970s.
We've shown you many many photographs of the town and its long-lost buildings.
over the last seven years, but we should never forget that without its people - and especially without people like George - a town is nothing.

Jonathan Williams (Middlewich Town Clerk) Not sure that's allowed. Mutiny on the Dustcarts?! Sacrilege; and a Dastardly thing to do. Maybe it was Muttley on the Dustcarts ! Wouldn't happen in my time.

George has cropped up a couple of times in The Middlewich Diary. Here are links to a couple of MD entries which feature him, including one featuring him as the intrepid driver of the renowned 'Orange Wonder'...

THE PIAZZA
THE ORANGE WONDER (2)

Posted by SALT TOWN PRODUCTIONS at Wednesday, May 30, 2018