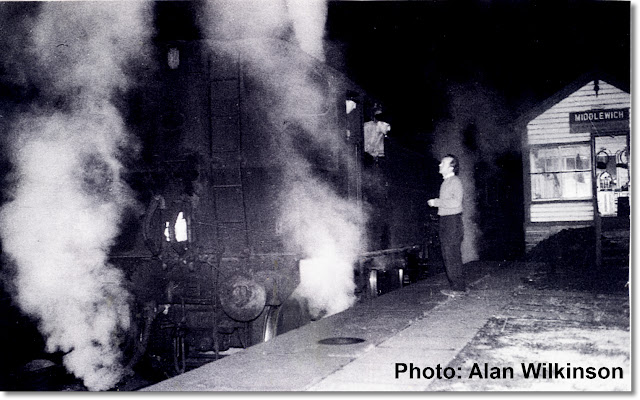 Courtesy of that enthusiastic chronicler of Cheshire railways, and the Middlewich line in particular, Alan Wilkinson, here's an evocative shot taken in October 1964 of the crew of number 41229 (the same engine which had, until four years earlier, been the main motive power for 'the Dodger') chatting to legendary Middlewich signalman David 'Jock' Myles as they  wait  for pilot assistance to Sandbach during a signalling failure.
This superb photo is taken from Alan's book Railways Across Mid-Cheshire (Foxline (Publications) Ltd ISBN 1 870119 66 5 which comes from the Scenes From the Past series and contains many fascinating photos of railways in our area, including many rare ones of the Sandbach-Northwich line in steam days. Copies are available on Amazon.
Posted by SALT TOWN PRODUCTIONS at Tuesday, May 31, 2016 No comments: 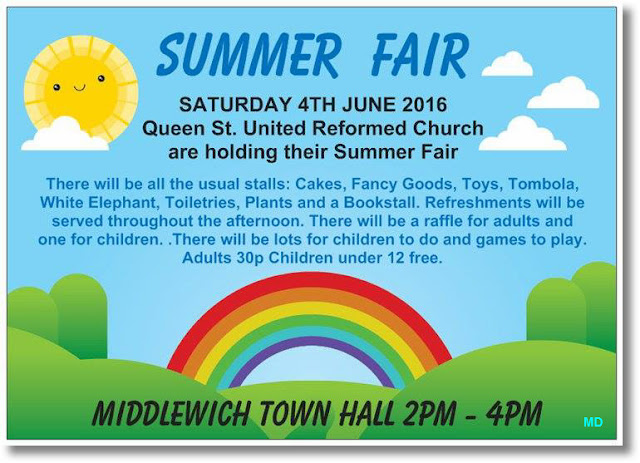 At the Victoria Hall Middlewich
(formerly the Town Hall Function Suite/Civic Hall)
Posted by SALT TOWN PRODUCTIONS at Monday, May 30, 2016 No comments:

EDITOR'S NOTE: This wonderful animation, which we first featured in August 2015, recently came to mind, and I decided to re-publish it in the run-up to the 2016 FAB Festival.  Firstly  because it's a great piece of work in its own right and a brilliant example of the way that creative people in Middlewich are picking up on the multifarious  happenings in the town and reflecting them back to be enjoyed by both inhabitants and visitors, as well as those poor, exiled Middlewichians who can no longer experience Middlewichness first hand.
Secondly because it reminds me of the last great skirmish I had with an unrepentant, unreconstructed, dyed-in-the-wool Keep Middlewich Miserable Campaign member. I'm itching to name him, but it wouldn't be fair because my first action, after telling him briefly what I thought of his views and what he should do with them, was to block him finally and irrevocably on Facebook - my invariable policy when people are rude. Because, as Sybil Fawlty once memorably said, there is NO excuse for rudeness. And there isn't. Ever.
It's been well said by many that you wouldn't accept people being rude to your face, so why would you accept it on Facebook?
Basically this KMMC member accused me of being 'obsessed with Middlewich'.
He had, it seemed, been monitoring my activities on the Middlewich Diary and on Facebook (which was nice, if a bit creepy, of him) and he had, finally, had more than he could stand.
'Everybody' knew, he said, that Middlewich was 'finished' and what had once been 'a lovely little town' was now an ugly and depressing place. He wondered why I 'couldn't see it' and offered to 'argue the toss' with me on this point.
This, I had to tell him, certainly wasn't happening, on the oft-cited grounds that there's 'no good knocking when there's nobody there' and I wasn't going to waste any of my (to me) valuable time.
And to accuse someone who runs a website called 'the Middlewich Diary' of being 'obsessed' with the town mentioned in the title, seemed to me odd to say the least.
But doesn't it some as a bit of a shock to have someone tell you that Middlewich, formerly a 'lovely little town' is now 'ugly and depressing', when it is surely obvious to anyone with the slightest glimmer of intelligence that the truth is exactly the other way round?
So my correspondent was consigned to the Facebook rubbish bin, along with 'Sam Dean' (not 'her' real name, by the way) and all the other obnoxious and deluded bores which, unfortunately, Facebook throws up from time to time.
But take another look at 'The Community Assembles', listen to that great music from Messrs Murfitt and Thompson, and rejoice in the fact that Middlewich, despite all its shortcomings and problems, is the lively and fascinating place we know and love today - Dave Roberts, Editor. 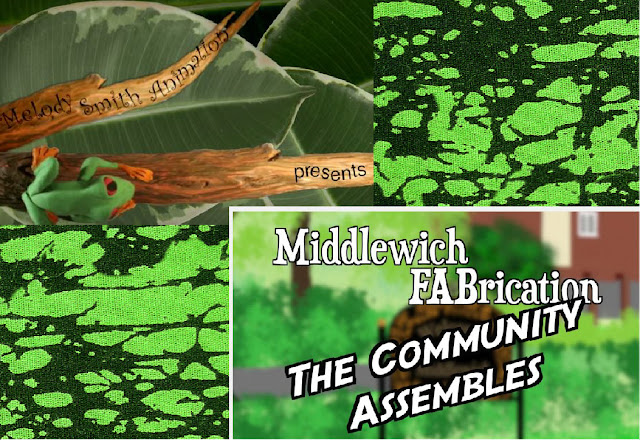 Once again Melody Smith Animation was at hand at this year's FAB Festival to help locals and visitors alike produce an animated Festival Souvenir like no other.
Look out for some familiar places and some familiar faces, including our Town Crier Devlin Hobson and his wife Jenny who, we're told, in common with other participants,'animated themselves'!

Find out all about MELODY SMITH ANIMATION here:

Posted by SALT TOWN PRODUCTIONS at Monday, May 30, 2016 No comments: You always used to be able to gauge a town's importance by the size and appearance of its local police station.
Here, pictured in 1972 before its demolition to make way for a much smaller building, is Middlewich's rather imposing and substantial looking  Victorian police station.
It stood in Queen Street, near to the site of the current station but closer to the road - more or less in the space which is now the approach road and car park for our now much-diminished Middlewich police headquarters.*
The change to a smaller building had less to do with rising or falling crime rates than with the way the Cheshire constabulary was organised.
As can be seen from our colour picture, the old station, with its courtyard and flagpole. had a solid and reassuring look to it which the current one lacks.
The Morris Minor too harks back to an age of 'proper' police stations, 'proper' police cars and 'proper' policemen and policewomen.
On the roof can be seen Middlewich's air raid siren, later used to summon the fire brigade. This siren was replaced by a new one placed on top of the hose-drying tower at the new fire station in Civic Way when it opened in the early 1970s.
This system of telling the firemen (and everyone else) that there was a fire was replaced by individual alarms in firemen's homes, and then by a bleeper system in around 1970/71.
The siren in Civic Way was occasionally tested for a few years after its use by the fire brigade ceased, as it was intended to give warning of nuclear attacks during the period of Cold War tension which lasted until the end of the 1980s.
It was an eerie sound, so reminiscent of wartime Britain, which has now been consigned to the history books.
The siren in Civic Way now seems to have disappeared, the need for it presumably having disappeared too in an age of improved telecommunications.

According to Allan Earl, in Middlewich 1900-1950 (Cheshire Country Publishing 1994)
Page 152,  Middlewich's siren was given the nickname 'Moaning Minnie'.
If you ever heard it, you'll understand why. There is, of course, a lot more information on the role that Middlewich Police Station played during World War II, when it acted as a control room for the various air raid, fire and auxiliary services in the town, in Allan's book.
Until 1927, again according to Allan Earl, the church bells had been used as a means of summoning the fire brigade. Presumably there would have been a distinctive pattern to the ringing of the bells for a fire alarm in order to distinguish such an alarm from normal, or practice, bell-ringing.

* This account dates back to 2011 when there was very little police presence in the town, and the police station was only occasionally manned. The building now houses a couple of computers for the use of our Police Community Support Officer, based in Holmes Chapel and will, according to reports, soon be closed altogether.

Note: This diary entry was one of several which appeared on Facebook in 2011 before the start of the Middlewich Diary blog. For some reason this one was never transferred to the Diary at that time, and we're pleased to be able to do so now.

Dave Roberts: My late mother always maintained that she saw a flying saucer hovering over the police station in 1970. All very intriguing. She was certainly the last person you'd suspect of imagining things, or indulging in flights of fancy.

Posted by SALT TOWN PRODUCTIONS at Thursday, May 12, 2016 No comments:

SEE ALSO: ARTISTS APPEARING AT THE WHITE HORSE OVER THE FAB FESTIVAL WEEKEND

THE WHITE HORSE ON FACEBOOK
Posted by SALT TOWN PRODUCTIONS at Thursday, May 12, 2016 No comments: 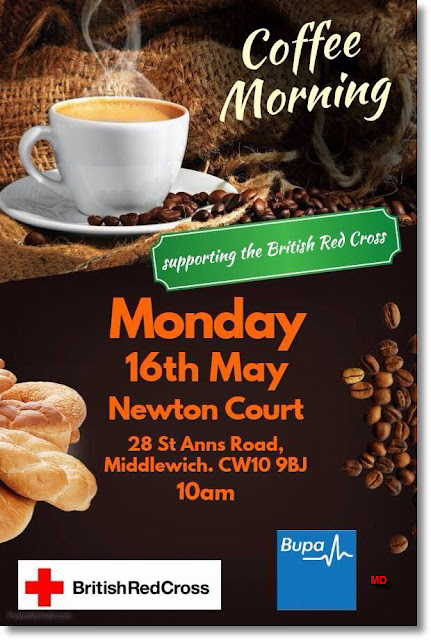 SALT SUNDAY 2016 AT THE LION SALT WORKS 8th MAY (ARCHIVED) 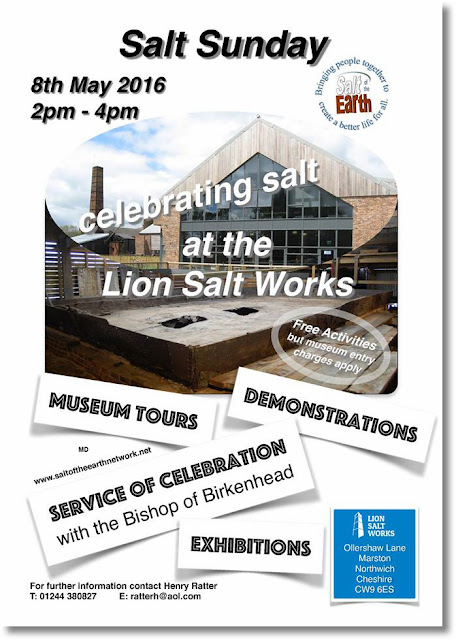 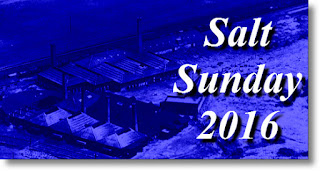 Posted by SALT TOWN PRODUCTIONS at Friday, May 06, 2016 No comments:

Here's a direct Youtube link to part one of 'Bank Holiday', made by the Mid-Cheshire Amateur Cinematography Society in the late thirties around Middlewich, Bostock and Beeston Castle. The film was written by Bill Oakes and features, among others, Arthur Roberts, Evelyn Ridgway, Bill Oakes and Winifred Oakes.
Part one is justly famous because it features a few fleeting seconds of Middlewich Railway Station in all its 1937 glory.
Beeston Castle & Tarporley Station also features in the film, as do many local beauty spots (and pubs) in the area. The large house at the beginning of the film is not in Middlewich but in Wheelock, and still looks pretty much the same today.
The original film is now in the safe keeping of the North-West Film Archive in Manchester. This is the official, authorised Salt Town Productions version.
We are working on a new, continuous version of this film with music featuring the appropriate I'm Happy When I'm Hiking, performed by Albert Whelan.
The film is dedicated to the memory of my Dad, Arthur, who plays the drunk with the bike and the fishing tackle. That's him in the opening scene, throwing stones at someone's bedroom window.

Watch out in Part two for the scene in which our weary revellers are picked up and given a lift by a gentleman with a horse and cart. This was completely unscripted and happened when the horse and cart chanced to be travelling along the country lane where filming was taking place. The scene where those same revellers stop to take their boots off and rest their sore feet was filmed at Bostock. That old-fashioned mile-post is still there, exactly as it was over three quarters of a century ago.
Dave Roberts

Posted by SALT TOWN PRODUCTIONS at Thursday, May 05, 2016 No comments: