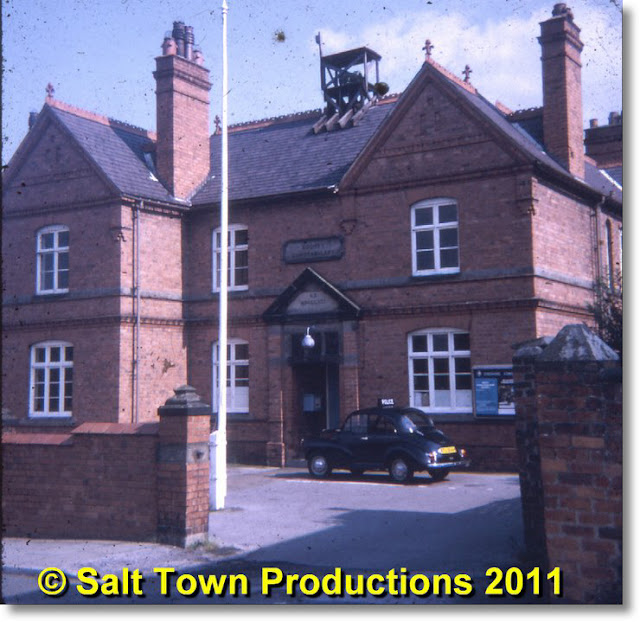 You always used to be able to gauge a town's importance by the size and appearance of its local police station.
Here, pictured in 1972 before its demolition to make way for a much smaller building, is Middlewich's rather imposing and substantial looking  Victorian police station.
It stood in Queen Street, near to the site of the current station but closer to the road - more or less in the space which is now the approach road and car park for our now much-diminished Middlewich police headquarters.*
The change to a smaller building had less to do with rising or falling crime rates than with the way the Cheshire constabulary was organised.
As can be seen from our colour picture, the old station, with its courtyard and flagpole. had a solid and reassuring look to it which the current one lacks.
The Morris Minor too harks back to an age of 'proper' police stations, 'proper' police cars and 'proper' policemen and policewomen.
On the roof can be seen Middlewich's air raid siren, later used to summon the fire brigade. This siren was replaced by a new one placed on top of the hose-drying tower at the new fire station in Civic Way when it opened in the early 1970s.
This system of telling the firemen (and everyone else) that there was a fire was replaced by individual alarms in firemen's homes, and then by a bleeper system in around 1970/71.
The siren in Civic Way was occasionally tested for a few years after its use by the fire brigade ceased, as it was intended to give warning of nuclear attacks during the period of Cold War tension which lasted until the end of the 1980s.
It was an eerie sound, so reminiscent of wartime Britain, which has now been consigned to the history books.
The siren in Civic Way now seems to have disappeared, the need for it presumably having disappeared too in an age of improved telecommunications.

According to Allan Earl, in Middlewich 1900-1950 (Cheshire Country Publishing 1994)
Page 152,  Middlewich's siren was given the nickname 'Moaning Minnie'.
If you ever heard it, you'll understand why. There is, of course, a lot more information on the role that Middlewich Police Station played during World War II, when it acted as a control room for the various air raid, fire and auxiliary services in the town, in Allan's book.
Until 1927, again according to Allan Earl, the church bells had been used as a means of summoning the fire brigade. Presumably there would have been a distinctive pattern to the ringing of the bells for a fire alarm in order to distinguish such an alarm from normal, or practice, bell-ringing.

* This account dates back to 2011 when there was very little police presence in the town, and the police station was only occasionally manned. The building now houses a couple of computers for the use of our Police Community Support Officer, based in Holmes Chapel and will, according to reports, soon be closed altogether.

Note: This diary entry was one of several which appeared on Facebook in 2011 before the start of the Middlewich Diary blog. For some reason this one was never transferred to the Diary at that time, and we're pleased to be able to do so now.

Dave Roberts: My late mother always maintained that she saw a flying saucer hovering over the police station in 1970. All very intriguing. She was certainly the last person you'd suspect of imagining things, or indulging in flights of fancy.