Bank Holiday was produced by the Mid-Cheshire Amateur Cinematography Society circa 1937.
The film shows the adventures of a group of friends venturing out from Wheelock (that fine old house at the top of the bank is still there, and looks very much the same today) 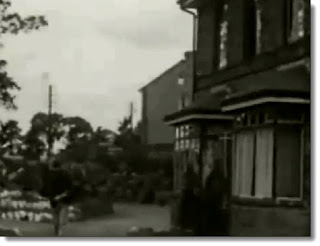 and into the Cheshire countryside around the River Dane near Middlewich, the Beeston Castle and Tarporley area, Bostock and the Shropshire Union Canal.

Precious seconds of footage showing Middlewich station in its heyday. To get to Beeston Castle & Tarporley station, our travellers would have had to change at Crewe. They're on the wrong platform for the Crewe train... 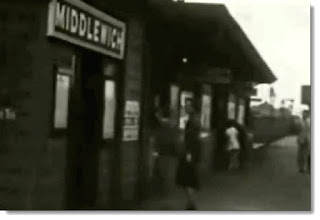 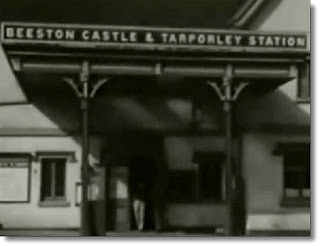 Glimpses of the Nag's Head Hotel in Wheelock. 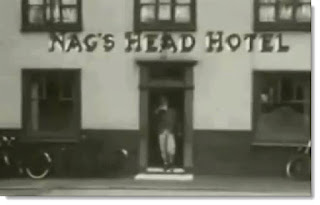 An old black and white milestone on the Middlewich-Northwich Road at Bostock, which is still in exactly the same position today and, despite the depredations of  modern-day road traffic, looks just the same as it did eight decades ago. 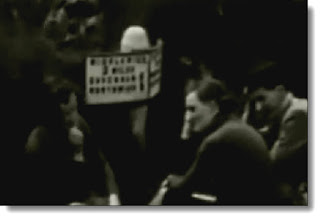 Watch out, towards the end of the film, for the scene in which several of our tired and weary Bank Holiday revellers are picked up by a horse and cart in a leafy Cheshire lane. This scene wasn't planned in any way; the cart just happened along as filming was taking place, and the driver was happy to be a part of the proceedings. 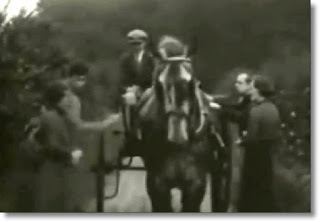 ...and what better destination could you have than the one so stylishly depicted in this long-vanished signpost? 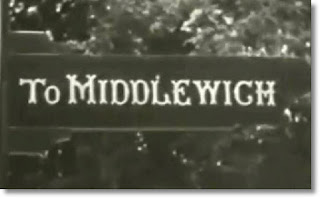 I've loved this film ever since I first saw it when I was a small child. It features many of my relations and their friends. Uncle Bill (Oakes), once of Three Willows in Mill Lane Middlewich, is the man who (heroically, we always thought) falls into the River Dane in an attempt to retrieve his cap. Uncle Bill also wrote the script (or 'scenario' to use the term current at the time).

Auntie Winnie and Auntie Evelyn are also very much in evidence, Auntie Winnie (Uncle Bill's wife) as one of the hikers, complete with rucksack, and Auntie Evelyn  wielding a camping kettle and primus stove four minutes into  the film. Auntie Evelyn, incidentally, was married to Clifford Ridgway, and older Middlewich residents may remember her as the proprietor of Ridgways Newsagents in Wheelock Street, more recently known as Chisholm's.

But the undoubted star of the show is my Dad, Arthur, playing the unlikely role of an angler whose love of angling is only surpassed by his love of bottles of beer. 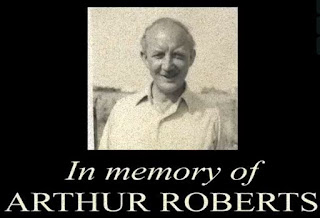 In real life Dad hardly ever touched a drop, but that's real acting for you.

In case you're wondering which of the two bicycling fishermen is Dad, he's the one in the lighter coloured hat.

If you recall all those old-fashioned Western films, you'll remember that the 'goodies' always had lighter coloured hats than the 'baddies'. Not that the other fellow was a 'baddie', of course, but it does make identification a bit easier...


There's a lovely shot in the film showing one of Dad's prized possessions, a Victorian gold pocket-watch which was passed on to him by his father.

That same watch is now one of my prized possessions, too, and still keeps perfect time.

A word about the music: Over the years this film has been shown with various tacked-on musical accompaniments, but I've always known the exact song which  would make the perfect companion to these 1930s Cheshire frolics: Albert Whelan's immortal I'm Happy When I'm Hiking - and I'm pleased to be able to marry film and song together for the first time here. 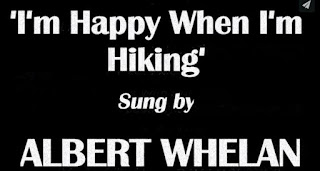 Albert's classic song is augmented by other appropriate music from  Jack Hylton, the Andrews Sisters, the New Concert Orchestra and Jack Leon & His Band. Making a virtue out of a necessity, we've spliced together Albert's version of this quintessential hiking song with Jack Leon's version at the start of the film. Can you tell where the joins are? Albert Whelan's unedited version, in its entirety, is played over the closing sequences and titles. It took a lot of fiddling about to do all this, but that fiddling can best be described as a 'labour of love'! 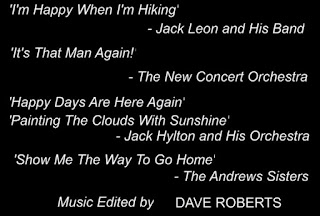 You'll note that one of the pieces used is It's That Man Again, the theme tune to Tommy Handley's wildly popular radio show of the same name,  usually abbreviated to ITMA.
This is included for a very special reason:
As noted (below) the films in the Roberts Collection ended up in the North-West Film Archive at Manchester University.
In the early 1990s Granada TV, then at its original home in Quay Street, Manchester, was still in the business of making 'regional' programmes for transmission only in 'Granadaland', aka the North West.
One of the company's programmes for 'local' consumption was a nostalgic documentary series called The Way We Were, narrated by Stuart Hall, which contrasted life in the North West in the 1930s, 40s and 50s with life in the early 90s.
The team at Granada would often call me to ask for copyright clearance on little bits of the films in the  Roberts Collection for inclusion in this nostalgic series, thus making Dad and Uncle Bill and other members of MCACS latter day TV stars, 60 years or so after they made their films.
The production team at Granada were very fond of using It's That Man Again as background music because, although ITMA is usually thought of as a wartime show, it actually started in the late 1930s and continued after the war until Tommy Handley's death in 1949. The ITMA theme is a 1930s classic, redolent of the rather desperate optimism of those fretful times. Our film features the full studio orchestra version which is included here as an oblique remembrance of Granada TV and all the staff who were sold down the river when the bland and boring national 'itv' usurped the proper regional service which we valued so much and which has been taken away from us.

Although the music still sounds great, sadly the picture quality on this version of the film is awful, bordering on abysmal. This is due to the fact that, owing  to unfortunate circumstances,  I've had to use a copy of a copy of a DVD of a video of the film (if that makes any sense) in order to bring it to you at all.

Like all the rest of the Roberts Collection of films, the original of Bank Holiday resides in the vaults of the North-West Film Archive in Manchester and I hope, in the fullness of time, to be able to show you a much better and much clearer version.

If you've been so kind as to read through this rambling introductory rigmarole rather than going straight to the link to the film, here it is again to save you the trouble of scrolling back to the top of the page.