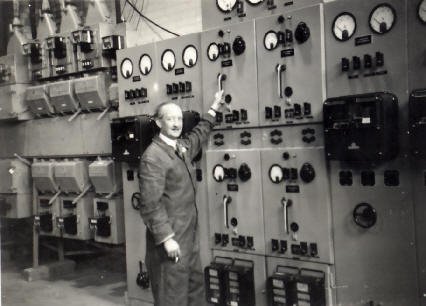 
This photo first appeared on Facebook, not as part of the regular 'Middlewich' series, but on Father's Day 2011 as a tribute to my Dad, Arthur Roberts, who was a foreman electrician at Cerebos Salt Ltd (later to become part of RHM Foods) from the late 30s until his retirement through ill health around 1969. Dad is pictured here in the generator room at Cerebos in (we think) the late 40s/early 50s. He had an encyclopaedic knowledge of the generator plant and its controls and, when he had to retire, was retained as a consultant and driven up to the works at weekends by Percy Wrench in the works van to check that everything was OK. The Cerebos generating plant was very efficient for its day, as the steam used to run the generators was not released into the atmosphere but recycled to provide heating and hot water for the whole factory, as well as for a very unusual salt pan which can best be described as a giant 'electric kettle'. The steam heated a giant element in the pan which, unlike the coal fired pans at Seddons and Murgatroyds, could be kept going for days and weeks on end, making it far more productive than most salt pans. A lot of the power produced, went to run the vacuum salt plant, fore-runner of the one now in use at British Salt which produces the greater part of the country's salt requirements.

Salt plants and electrical generators are, of course, run with the help of computers these days, but in Dad's day, all the knowledge was, literally, in his head. He taught himself electrical engineering in his spare time by correspondence course.