UPDATE:
On the 17th September 2014 it was announced that, after a gap of a hundred years, Middlewich was to have a new Town Crier and that Devlin Hobson had been appointed to the post.
Congratulations to Devlin and his wife Jenny. We look forward to seeing you both at events in Middlewich for many years to come!
Dave Roberts, Editor.

Below is our original Diary entry on Devlin which was put together to publicise the idea of reviving a Town Crier for Middlewich. You'll note that, at this point, we didn't know that the idea was for Devlin himself to become our MiddlewichTown Crier.

Just before the Middlewich FAB Festival of 2014 the question of whether or not Middlewich should revive the tradition of  having a Town Crier arose and, after initial scepticism and doubts, the idea was enthusiastically embraced by people seeing a great opportunity for this symbolic figure to help in promoting the town. Any lingering doubts were swept away at the festival itself when Devlin Hobson, Kidsgrove's Town Crier, came along to show us all how it should be done.

I'm 59 years old and been a town crier since July 2013. In my first competition in Nantwich I was placed 5th out of 13 criers and at the British Championship Huddersfield 2013 I achieved 15th place out of 24 criers. I have also  won best content of cry and, with my Escort, best dressed couple, both of these at Garstang 2013. Given the short time that I have been a Crier this was a pleasing achievement. I keep involved with my town and enjoy putting Kidsgrove on the map with the competitions.
I had an unusual job before I retired, I was a High Security Papermaking Technician I made it and you spent it Banknotes.
I was a Samaritan for 7 years 5 of which I spent in Prisons supporting inmates and staff. I helped to organise and train inmates for Listener scheme's which operate in prisons. I became part of a regional team which looked after 13 prisons in our area. I have seen and heard many things. I found this very fulfilling work and to see that you actually make a difference to someone is a fantastic feeling.
On retirement I moved to Nantwich and was able to attend St Marys Church regularly, I am now a sidesman and do duties every 6 weeks.
I take my Town Crying seriously and enjoy being a member of both The Loyal Company and The Ancient and Honourable, which enables me to promote the ancient art of Town Crying and my town of Kidsgrove throughout the country.
(from visitchester.com)
After a little research we were able to establish that Middlewich did indeed have its own Town Crier right up, it would appear, until a few years before  the start of the First World War. 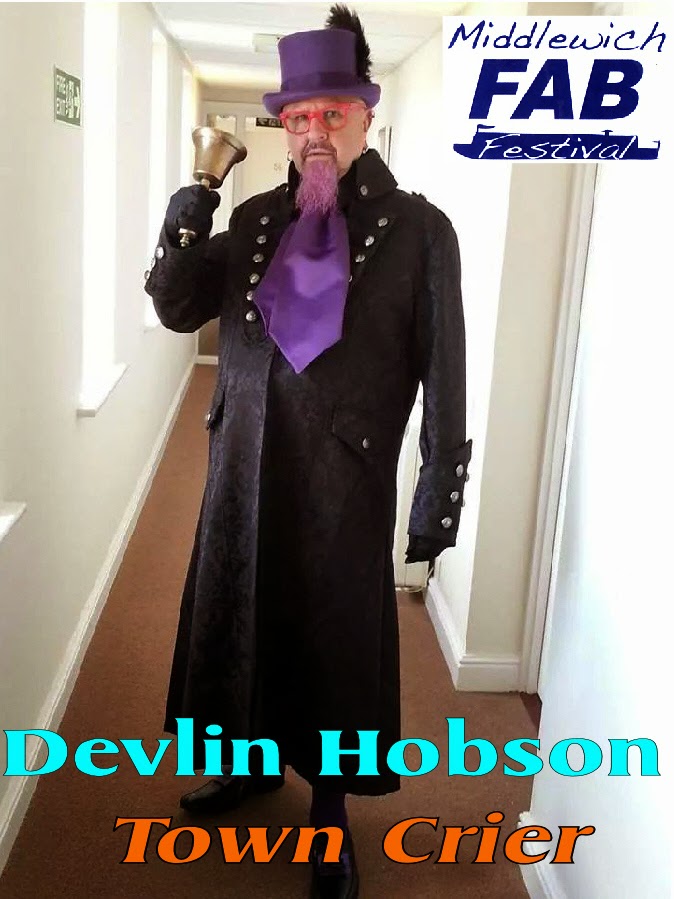 An extra special guest at this year's Middlewich FAB Festival is Kidsgrove's Town Crier, Devlin Hobson, who will be here on Saturday 14th to enliven the proceedings and make sure everyone knows what's going on and where.

There's been talk lately of Middlewich having its own Town Crier once again and reviving a tradition which was, surprisingly, still carried on in the town as late as 1906. Devlin will be here as a sort of trailblazer for the idea, as an ambassador for Town Criers in general and also, I imagine, as an additional blow to the Keep Middlewich Miserable Brigade, members of which desperately try each year to pretend that the Festival is not happening around them as they try to go about their same-old same-old business.
As you can tell just by looking at his photo, Devlin will be a hard man to ignore.
Watch (and listen) for him on Saturday.

When the idea of a new Town Crier for Middlewich was first mooted I was, at first, sceptical, being (to my eternal shame) under the impression that Middlewich had never had such an official in its long history and feeling uncomfortable with the idea of 'inventing tradition'.
This misconception is a little hard to understand as Allan Earl, invariably our first port of call for information on Middlewich history, mentions him  in Middlewich 900-1900 (Ravenscroft Publications 1990), a book which is required reading for anyone interested in Middlewich and its history and one which I have pored over numerous times over the years.
Old age creeping on and causing memory lapses, perhaps?

On page 170 of the above publication Allan is talking about C.F Lawrence becoming Clerk to the Middlewich UDC in 1904 and says:

Mr Lawrence would have known the town crier of this time, a man named Peter Jackson. His nickname was 'Crutchy P' because he was crippled in both legs and had a humped back, but managed to get along on crutches. He would stand in the Bullring under the centre gas lamp, ring his hand bell and shout 'Oh Yes! Oh Yes!' and then announce such things as a crockery sale at the White Bear, giving the date and time. This type of bell man followed the bell man of earlier years who announced parish meetings, declarations, changes in the law, victories or defeats in war etc.

Allan Earl's Middlewich 1900-1950 (Cheshire Country Publishing 1994) also mentions the Town Crier who was still around in 1905/6 (and was, presumably still 'Crutchy P' although Allan doesn't say so) and was able to announce the building and completion of the Council Schools in King Edward Street.

The foundation stone of the new Council School was laid on Wednesday January 3rd (1905) by Col. France-Hayhurst and by the following November 1906 the building was completed and opened.....The new Council School was designed to accomodate 288 junior and 297 senior (pupils). The Town Crier was still operating at this date and he would have announced the school information as well as the dates of bazaars, smoking concerts etc.

And having thought about the idea of Middlewich having a new Town Crier, I'm all in favour of it. Not only would it be a quite legitimate revival of an old tradition, it can serve a very useful purpose, particularly at events like the FAB Festival where a crier could act as an audio Notice Board, telling people what's going on.
A kind of human PA system (only much more entertaining and authoritative) which doesn't need batteries or electricity.

We'll leave the last word to Devlin....
(Please note that, in this instance, the use of capitals is not intended to denote SHOUTING!!!!! but merely talking in a loud, well projected, voice)

'I WILL BE IN MIDDLEWICH ON SATURDAY, HELPING WITH THE FESTIVITIES! IT'S A GREAT EVENT! COME ALONG AND ENJOY A GREAT DAY!'

Geraldine Williams Great piece about the history of Town Criers in Middlewich, Dave - and a timely reminder of the days when the world was populated by 'Crutchies', 'Stumpies' and many other non-PC names for anyone unfortunate enough to have a physical or mental disability.

Dave Roberts Absolutely Geraldine. I don't care what people say, we now live in a much more compassionate and caring society than we did before. And what a lot of people refer to as 'political correctness gone mad' is, in most cases, just plain common decency. 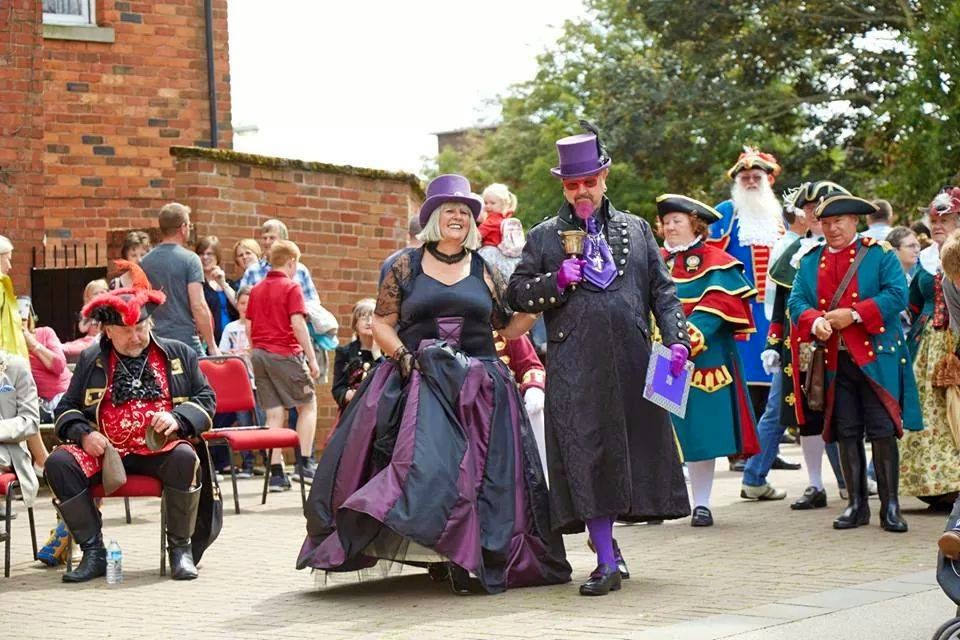 Devlin and Jenny enjoy the company of  fellow town criers including, in the background, Shrewsbury Town Crier Martin Wood (in red and blue and sporting a white beard) who, at 7ft 2ins, is the world's tallest Town Crier! 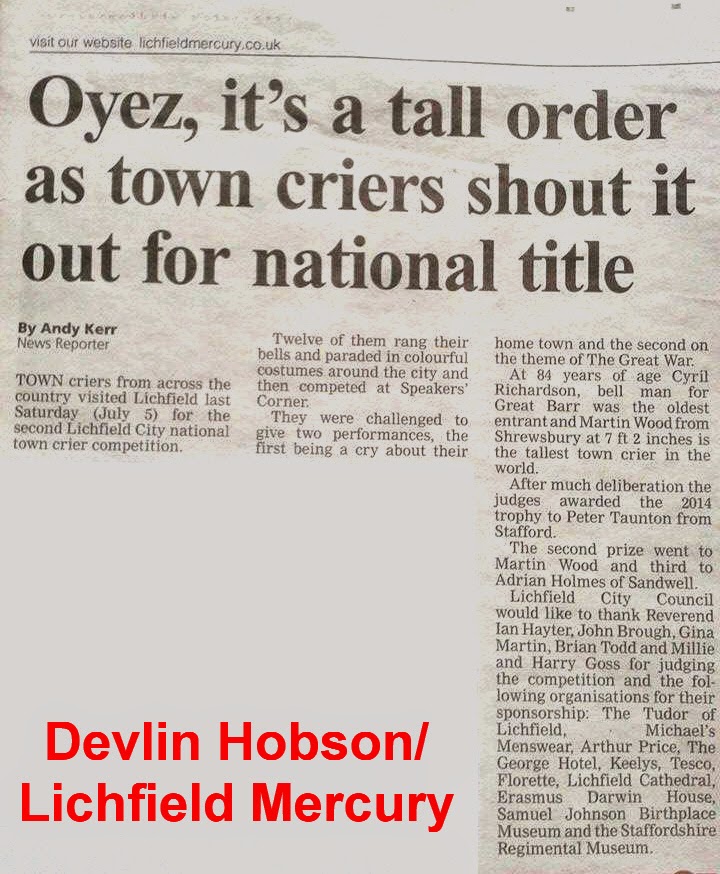 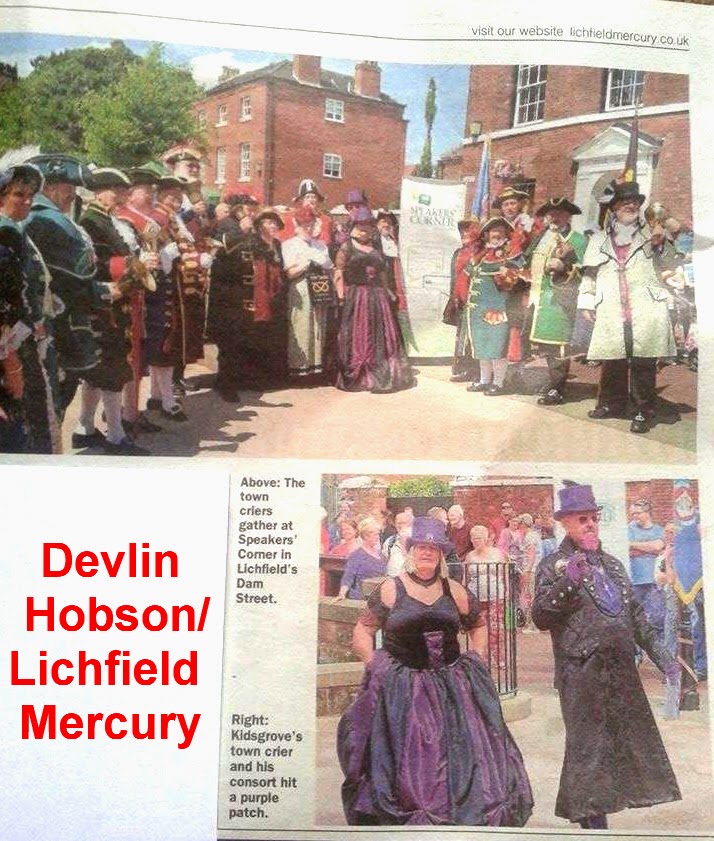 Although he's only been in office for a year, Devlin Hobson is already a veteran of quite a few competitions. Here's a particularly good report on the 2013 Nantwich event from our friends at the CREWE NEWS, featuring many photographs and even a video:

Devlin and Jenny can be seen at this year's  Montgomery event on July 19th, and at the Nantwich Competition on July 26th. They'll be back in Middlewich for the Makers' Market on the 30th August.

You can find out more by going to Devlin's Facebook Page:

And, assuming that Middlewich embraces the idea of a Town Crier, which it surely must, how long will it be before we have our own Town Crier competition?

We're guessing not too long...

(UPDATE: In fact after Devlin had arranged for a National Town Crier Competition to be held here in 2015 the first Middlewich Competition was held in 2016. The contest is now a permanent fixture on the Middlewich events calendar each year. - Ed.)

SALT TOWN RADIO: HIGHLIGHTS FROM 'MEMORIES OF A BOATWOMAN' 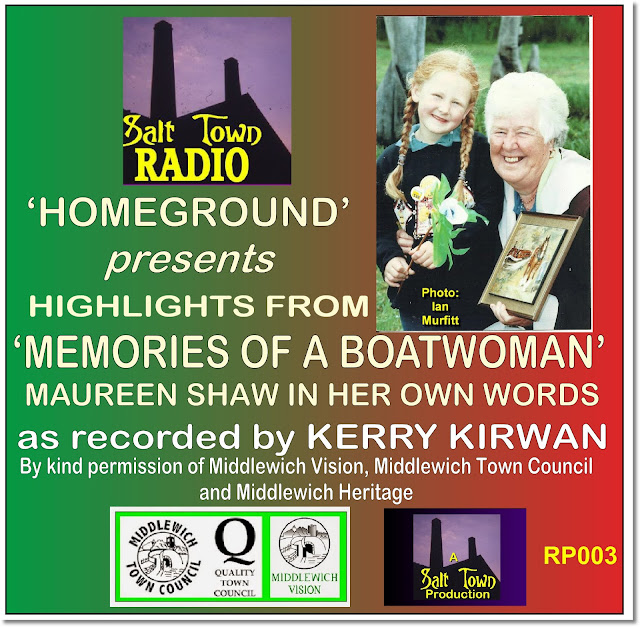 'Homeground' programme three brings you highlights of 'Memories of a Boatwoman' featuring the late Maureen Shaw of Wardle Lock Cottage in Middlewich.

HIGHLIGHTS FROM 'MEMORIES OF A BOATWOMAN'

With grateful thanks to Kerry Kirwan
Posted by SALT TOWN PRODUCTIONS at Sunday, September 09, 2018 No comments: