THE CLOSURE OF ICI MIDDLEWICH, 1962 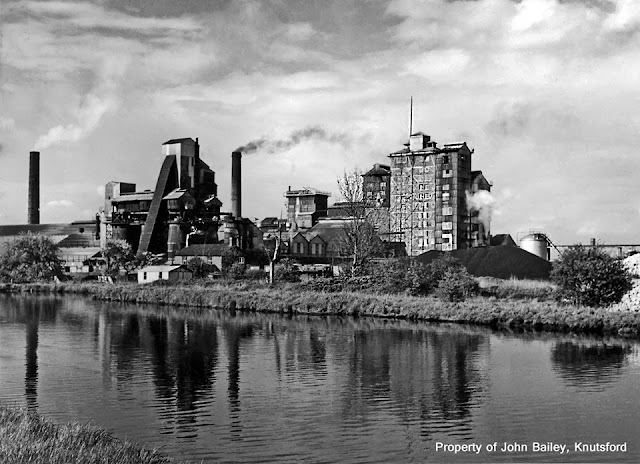 Mike Jennings writes
Hi Dave. I am not sure we have seen this photo before? I have  found with it the letter my father got about the closure of Middlewich ICI.

Actually we have seen the photo before. It's the commemorative photo given to employees of ICI Middlewich when it closed in 1962. We last looked at it in this Diary entry which dates originally from 2014 and was re-published last July. Bevan Goodall, who left the works in 1960 and now lives overseas was able, belatedly, to obtain his copy via the Middlewich Diary. There are also links in this Diary entry to other photos of ICI Middlewich: 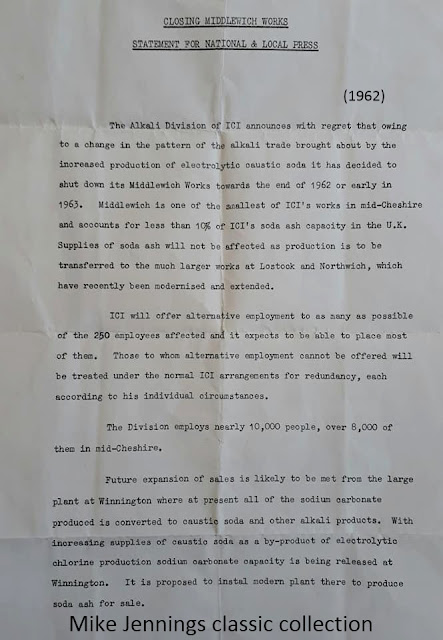 But we've never seen the accompanying statement from ICI concerning the closure of the works and strongly suspect that former employees won't have seen it either since its original distribution in 1962. It's very simply produced (most likely on a Gestetner or Roneo stencil machine - the usual technology at the time for producing bulk copies of anything) and undated, with no ICI logo or letterhead and no signature, and appears to be a simplified version of the company's Press Release to 'national and local press' concerning the closure. It was probably included in employees' wage packets.

What's interesting is that it not only announces the closure (without actually giving a firm date) but also gives reasons why the works is closing, and how the company proposes to maintain production of soda ash at Lostock and Winnington (now itself closed).

Because the text in the original is a little difficult to read, we've transcribed it here:

The Alkali Division of ICI announces with regret that owing to a change in the pattern of the alkali trade brought about by the increased production of electrolytic caustic soda it has decided to shut down its Middlewich works towards the end of 1962 or early in 1963.
Middlewich is one of the smallest of ICI's works in Mid-Cheshire and accounts for less than 10% of ICI's soda ash capacity in the U.K.
Supplies of soda ash will not be affected as production is to be transferred to the much larger works at Lostock and Northwich, which have recently been modernised and extended.
ICI will offer alternative employment to as many as possible of the 250 employees affected and it expects to be able to place most of them. Those to whom alternative employment cannot be offered will be treated under the normal ICI arrangements for redundancy, each according to his individual circumstances.

Future expansion of sales is likely to be met from the large plant at Winnington where at present all of the sodium carbonate produced is converted to caustic soda and other alkali products. With increasing supplies of caustic soda as a by product of electrolytic chlorine production sodium carbonate capacity is being released at Winnington. It is proposed to install modern plant there to produce soda ash for sale.

In more recent years most of the old ICI Middlewich site has been the location for Pochins Ltd and some of its associated companies. The collapse of the company was recently announced. The southern end of the site was, from 1971 until the year 2000 the location for ERF's Service Centre. Those buildings are still being used by the motor industry, but it is unclear what will happen to the area used by Pochins. A few of the former ICI buildings remain on the site, as do the wrought iron gates situated behind the modern Pochin office block.

In a poignant ceremony in July this year, the recently re-furbished works war memorial and memorial garden were formally re-opened by Lord Grey of Codnor.

THE MIDDLEWICH YEAR: OPENING OF THE BRUNNER-MOND MEMORIAL