This photograph of the ICI Works in Middlewich is dated 1962 and has been restored to near-mint condition by Bill Armsden, who writes:

This photograph, taken in 1962, is of the ICI Works which could be seen from Booth Lane and was located to the right of where the Kings Lock Pub is.

Pochins now sits where this works was.I have cleaned up and enhanced the picture and it is now almost mint. It is hard to believe that just over 50 years ago this dominated the view from St Anns and Kitfield Avenues.Do you remember it? I do.


Bill says that the photo has the year 1962 written on the back, and was one of many copies given out to workers at ICI Middlewich when the works closed in that year.

This particular copy belongs to John Bailey, who now lives in Knutsford.*

I have a vague feeling that this photo may have been taken before 1962, as the buildings and apparatus on the site don't look exactly as I remember them at that time. Then again, I was only a youngster in 1962, so I may be mistaken.

Does anyone know if this is indeed how the works looked in 1962?

Here's a different view of part of the works, courtesy of Bill Eaton 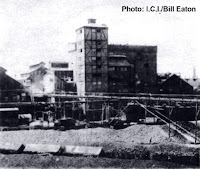 And a late 1950s view of the SUC Middlewich Branch, also from Bill Armsden's collection, which includes a glimpse of the works. 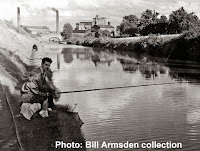 CANAL SCENE FROM THE LATE 1950s

Many thanks to Bill and also to John Bailey* for allowing us to feature this historic photo.

'Thanks, Dave, for making this photo available.

I left ICI Middlewich in 1960 to emigrate to Australia, so I didn't receive a copy.

I remember working one freezing winter thirty-odd metres up the side of the distillation plant, installing some removable panels.

I had my billy-can of tea laced with rum sitting on a steam-pipe nearby.

Harry Sandbach, the foreman - a lovely guy - was in the habit of helping himself to a drink when he came around to inspect what was going on.

After a 'what the heck!' it didn't take him long to have another one!

Of course that wouldn't happen today with the current 'Health & Safety' regime...'

Many thanks to Bevan for this story, and how nice that he was able to get hold of his copy of the commemorative  photo of the works, albeit electronically, 58 years on -Ed.

* Sadly, since this diary entry was first published, John has passed away. -Ed

'My dear friend John Bailey sadly passed away suddenly in September last year from a massive heart attack. It was always his intention to make a private video of 'his Middlewich' as he was Middlewich born and bred.Sadly, that will never happen but we can thank him for the 8mm film shot in his car during the late 1960's whilst he travelled from St Annes Avenue through to Chester Zoo. The Middlewich Diary was given a copy of that film and John was very happy to do that.'

We were very sorry to hear of John's passing. Here's the link to that precious film -Ed

GLIMPSES OF MIDDLEWICH AND WINSFORD IN THE 60s
Please note that this film is temporarily unavailable, due to a technical problem. We hope to have the link restored very soon -Ed.