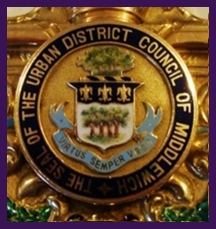 MAYORAL ENGAGEMENTS FOR 2019
Here's a full list of engagements which the Mayor and Mayoress  fulfilled from 13th June 2019 until the end of December 2019.

Links to relevant information, including blog posts, will be added as time allows.

Link to flyer and further details

Saturday 21st September. Greeting Mayor of Knutsford, Andrew Malloy, outside Middlewich Town Hall, as he makes a 'pitstop' on his charity bike ride in aid of new youth facilities in Knutsford.

CANCELLED: Tuesday 22nd October: Cheese and wine evening at Northwich, in aid of the Northwich Town Mayor's Charity. 7pm. This event was cancelled.

Saturday 26th October: Launch of the 2019 British Legion Poppy Appeal. 'Biker'   event at the War Memorial, Middlewich Town Centre 12.50pm. The Mayor and Mayoress will be in attendance, as will Deputy Mayor Linda Boden and her husband John and Town Crier Devlin Hobson.

Friday 8th November: Poppy selling at Morrison's supermarket on behalf of the Royal British Legion. Come along, buy a poppy, have a chat and tell us how we're doing as your first Community Mayor and Mayoress!

Thursday 14th November: Helping out at a meeting at the Victoria Hall aimed at improving the no. 42 bus service and creating a Middlewich Bus Users` Group. Attended by the Mayor and Mayoress and Deputy Mayor Linda Boden.

Sunday 8th December. 3pm onwards. Children`s party at the Victoria Hall, organised by JACKIE LATHAM, followed by fundraising event. We`ll be organising a Tombola and selling tea and coffee and cakes  for the COMMUNITY MAYOR`S CHARITIES. Attended by the Mayor and Mayoress and Deputy Mayor Linda Boden.

APPEARANCE CANCELLED. Sunday 15th December. 3pm onwards. Children`s party at the Victoria Hall, organised by JACKIE LATHAM, followed by fundraising event.  We`ll be organising a Tombola and selling tea and coffee and cakes for the COMMUNITY MAYOR`S CHARITIES. Attended by the Mayor and Mayoress.
APPEARANCE CANCELLED DUE TO ILLNESS.

EVENT CANCELLED DUE TO ILLNESS. Sunday 22nd December. The Middlewich Diary Christmas Quiz at The Boar's Head.  In aid of the Middlewich Community Mayor's Charities. Compiled and presented by David Roberts. Starts at approx. 8.30pm.

CHRISTMAS EVE, Tuesday 24th December. Carols around the Christmas Tree in Middlewich Town Centre, in aid of the Salvation Army. Sadly, we were unable to attend this event due to illness.
THE MIDDLEWICH YEAR
Posted by SALT TOWN PRODUCTIONS at Tuesday, October 19, 2021