AN IMAGE FOR HALLOWEEN

Here's a striking image which Cliff Astles sent to us a while ago and we thought might be appropriate for Halloween.

Behind all the 'ghosties and ghoulies' and the rather unpleasant fake blood and plastic daggers and silly masks and so on lies the real Halloween, or Eve of Hallowtide, which was celebrated on the 1st and 2nd of November in Medieval times.
Hallowtide (or, in Ireland, 'Samhain') has (or had) little to do with the supernatural (and absolutely nothing to do with blood, horror and screaming skulls and the like - that's an American invention which only came into being when Hollywood started to get a grip of people's imaginations in order to promote its cheap blood and gore horror films).
It was a Christian festival and a time of feasting and celebration of the start of winter.
It later became linked with All Saints Day and All Souls Day, again celebrated on the 1st and 2nd of November, in which the church celebrated its saints and martyrs and the departed souls of all who had gone before.
In England, until recent times, Halloween was regarded simply as a time when the 'spirit' world was closer to the every day world than usual.
Now, like Christmas and Easter, Halloween serves as another chance to make money for big business with sweet manufacturers and makers of novelties cashing in more and more with each passing year..
Good fun for the kids, of course, but a world away from its origins in the mists of time when people would pause for a while in their busy lives to remember those who had passed beyond the veil into unknown realms which we can only wonder about.

Halloween in Middlewich in the late 1950s and early 1960s was a fairly low-key affair, as it was elsewhere in Britain before the blatant commercialisation of the festival took hold.
We certainly made lanterns, but not out of pumpkins, which only went on sale here in recent years.
Our lanterns were  hollowed-out turnips with candles inside them, and they used to reek to high-heaven when they got hot.
In actual fact we were following a tradition which went back a lot further than the Americans' pumpkin carving.
The original English medieval  Halloween tradition involved making lanterns from turnips and we were, whether we knew it or not, following that tradition.
I have vivid childhood memories of listening to ghost stories broadcast by AFN (the American Forces Network) on long-ago Halloween Nights over fifty years ago. They were broadcast on medium wave to the many American soldiers stationed here and all over Europe in those days.
The static and crackling and Radio Luxembourg-style fading in and out of the signal only added to the atmosphere.
Occasionally, but only occasionally, someone would organise a Halloween Party.
One such took place, I recall, in the late 1950s at the Manor, when it was still inhabited by the Willing-Denton family. As we were living in Nantwich Road at the time, it was just a matter of walking down the road and under the aqueduct to Manor Lodge, then making the arduous journey along the carriage drive to the Manor itself.
Once there, we were introduced to such quaint American customs as 'bobbing for apples'.
'Trick-or-treating' was discouraged because of  stories which reached us from America of people giving children apples with razor-blades in them and other such horrors. The stories were mostly complete nonsense - urban legends designed for the credulous. In fact, as far as we can gather,  there has only ever been one recorded instance of anyone trying to cause harm to trick-or-treating American children. The woman in question poisoned some candy and was later found to be insane. No one came to any harm.
But true or not, these gruesome stories put us off the idea of going from door to door asking for sweets, and the idea has only taken off in fairly recent years along with the rest of the Americanisation of Halloween.
Halloween in those days was just a distraction. Most of our energy was spent on preparing for the much more popular Bonfire Night a few days later.

Cliff's picture is made up of  images taken in and around Middlewich on two separate occasions. If you are wondering where the tree is, here, taken from his original comment on this entry, is what Cliff has to say:

As you pass the newly built houses along Warmingham Lane, look at the fields on your left hand side as you are going out of Middlewich (into Moston). After about 200 yards you will see the tree, just over the hedge and about 50 yards into the field.

- but please bear in mind that the rapid rate of housing development in Middlewich as in towns all over the area, means that the tree, and indeed the field, may not be there for much longer

...and  finally, here's a genuine Middlewich Witch at the 1973 Carnival in company with a lady advertising RHM's 'exceedingly good' Mr Kipling cakes... 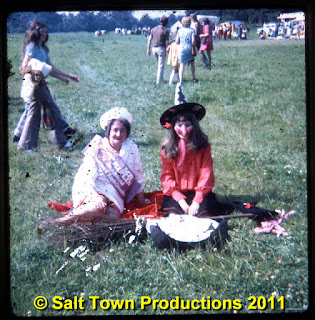