THE BIG LOCK AT NIGHT OCTOBER 2021 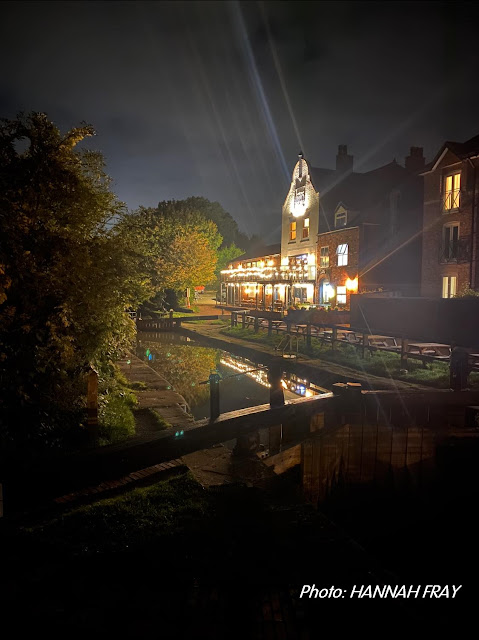 This superb night time shot by Hannah Fray shows the Big Lock pub, and the lock which gives it its name, on a dark night in October 2021. Once firmly part of Middlewich's industrial scene, the Big Lock was, until the 1980s, adjacent to British Crepe, textile manufacturers, using the site (and buildings) of the earlier Anglo-Swiss Condensed Milk Co. Those buildings have now been replaced by modern housing and the pub has been extended and modernised over the years to become an excellent pub restaurant and canal side cafe.
The Big Lock is a 'stack pub', the top part being at road level and the bottom part at canal level. At one time there were two bars, one for the residents of Webbs Lane and one for people working on the boats. The building at one time also incorporated a shop at canal level, to serve the 'boat people'
The lock itself, the only 'wide' lock in the area, was built in this way not, as is often thought, so that two boats could be accommodated at the same time, although it has of course served this purpose, but so that wide boats from the River Weaver could travel into the centre of Middlewich to reach the numerous salt and chemical works in the town. Whether this ever actually happened is unclear, but the destruction of the aqueduct at Croxton and its replacement by a narrow structure in the 1930s made it impossible anyway.

You can find out more about the Big Lock and its environs by following these links:

BIG LOCK & FINNEY'S LANE FROM ABOVE

STRAIGHT FROM THE HORSE'S MOUTH (A LETTER FROM HISTORY)