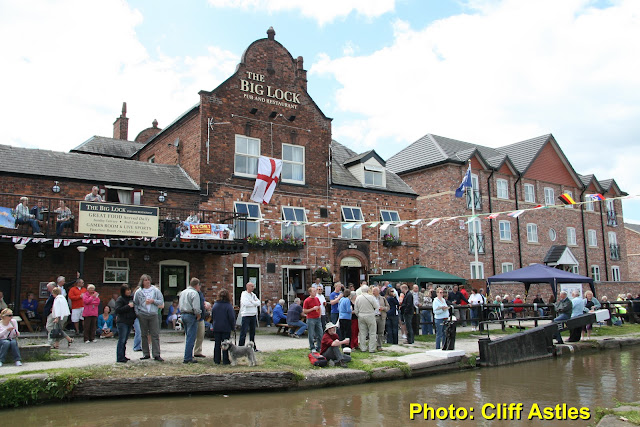 The Big Lock in Webbs Lane  reopened in March 2012 following a major renovation and just in time for the tourist season. This old canal pub, which we've featured several times before in A Middlewich Diary, takes its name from the nearly Trent & Mersey Canal lock.

Many thanks to Cliff Astles for supplying the above photo of The Big Lock illustrating how the building of the new housing next to the pubs has restored the look of the area to something approaching what it was when the old condensed milk factory/silk mill stood in its place.
Whoever designed that new housing rightly concluded that the Big Lock building needs another tall building next to it to make it fit into its surroundings.
Take a look at the Big Lock in former days here (follow the links).

The website for the pub can now be found at:

Posted by SALT TOWN PRODUCTIONS at Thursday, May 30, 2013