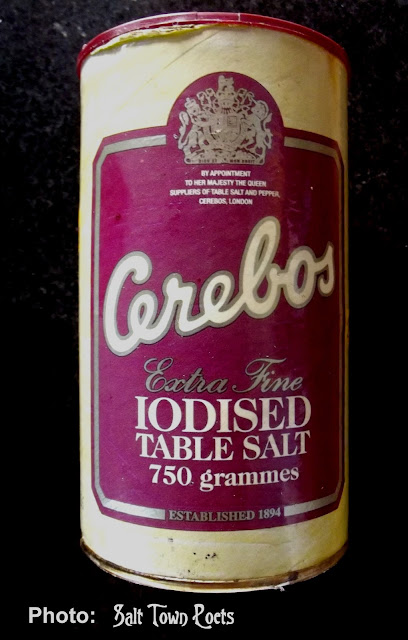 This Cerebos Salt drum was, rather surprisingly, bought as recently as 2004.
In fact, this style is still used today for Cerebos Extra Fine Iodised Table Salt.
Great prominence is given to the company's Royal Warrant showing that the company is a supplier of table salt and pepper to Her Majesty The Queen
What is intriguing is that as late as 2004, which is not only well into the RHM era, but also within sight of its end, the company was still proudly proclaiming the fact  that Cerebos Salt was - 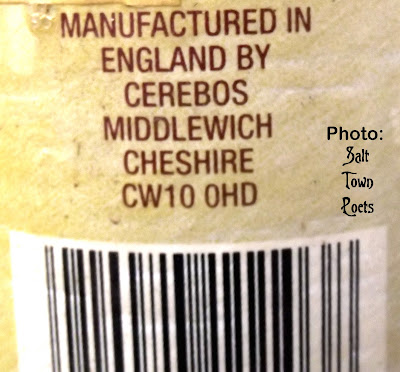 - with no mention of RHM Foods, which had taken over the company in 1968, or its short lived successors. The modern bar-code shows that the packaging is indeed of recent origin. 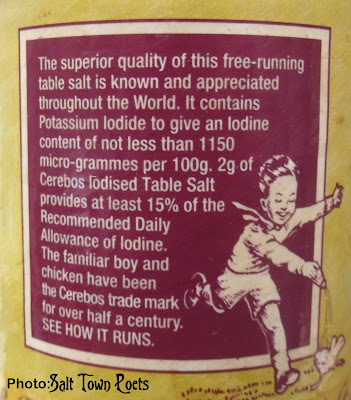 Also on the packaging is the familiar 'boy and chicken trade-mark, which we talked about here and much is made of the iodine content of the salt. Iodine is vital for health, although there are some people who are iodine intolerant and have to stick to non-iodised (or iodized or even iodated) versions of the product.
By now the original calcium phosphate anti-caking agent which had enabled free running table salt to be introduced in the nineteenth century had been replaced by the (presumably) more efficient magnesium carbonate and sodium hexacyanoferrate II, and the important iodine trace of 1150 microgrammes per 100g was added to the product in the form of potassium iodide.

SEE ALSO: SEE HOW IT RUNS!
Posted by SALT TOWN PRODUCTIONS at Wednesday, May 08, 2013