ALL DRESSED UP FOR THE JUBILEE? 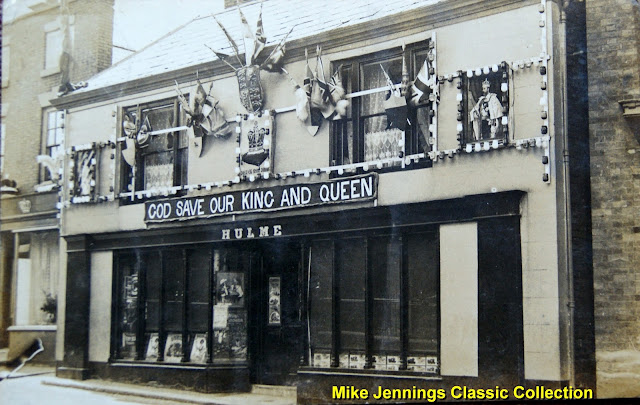 This entry was originally published under the title 'All Dressed Up For The Coronation - But Whose?'

by Dave Roberts
It is, of course, high time we dipped once again into the Mike Jennings Classic Collection, and this one is a classic indeed, although it's completely new to me.
When I first saw this photograph I jumped to the (not unreasonable) conclusion that it showed Hulme's Grocery on Hightown decorated for one or other of the Coronations in the first half of the  20th Century - 1911 or 1937.
It simply never occurred to me that there might be another explanation (see the comments from Geraldine Williams and Jim Moores, below).
I've left the rest of this Diary entry intact to once again show how the Middlewich Diary works when it comes to drawing in information and also to prove the old adage that two heads (or, in this case, three heads), are better than one...

I think I know when this picture was taken, and why,  but I can't be certain, because certain factors may not add up.
I think the King and Queen we're talking about are King George V and Queen Mary.
That picture of the King on the wall to the right certainly looks like George V. Extensive internet searches have not brought up that particular picture, but here's a picture of the King in question.

Is it the same man?
George V and Queen Mary were crowned on the 22nd June 1911, and it's possible that this picture was taken on or around that day and shows some of the decorations which would undoubtedly have been placed all around this traditionally loyal town.
But, somehow, the picture doesn't look quite right for 1911.
For a start the quality is very good if the picture is over a hundred years old. This doesn't necessarily mean anything.
Some of the early photographers were able to produce superb results with relatively primitive equipment and the photo could have been produced on a glass negative which was subsequently stored away safely for years.
My doubts arise from other factors:
Was Hulme's Grocery even in existence in 1911?
The HULME lettering on the front was the same for many years - right up, in fact, until the shop closed. But was it there in 1911?
(incidentally, that shop front can be seen here in 1938 undergoing repainting)
Also, if you look carefully, what appear to be electric light bulbs festoon the decorated shop front - no doubt coloured ones. Would coloured bulbs have been used as early as 1911 for this purpose?
Or have we got the wrong Coronation altogether, here?
Are these decorations for Middlewich's contributions to the 1937 Coronation of King George VI?.


That certainly doesn't look like him on the wall of Hulme's, and although the picture on the other end of the shop isn't very clear, it certainly doesn't seem to be the dear old future Queen Mother either.
Perhaps George and Mary visited the town at a later date (he didn't die until 1936) and the town was suitably decorated for the occasion?
The problem with that theory is that I can't find any reference to a Royal Visit to Middlewich during that period.
And, in case you're wondering, it's unlikely that poor old Edward VIII was the King we're talking about.
Not only does the picture on Hulme's wall not look like him but he was, as we know, never even crowned before scandal overtook him. He's most unlikely to have had time for a Royal visit to Middlewich or anywhere else during his short but eventful reign.
Not even Ultra-Royalist Middlewich would have put on such a display for someone universally considered to have 'let the side down'.
Perhaps the decorations weren't for a Coronation at all. Could it be that the shop was decorated for  the dedication of the war memorial in 1934 or some similar  ceremonial occasion?
I think it's doubtful.
The words GOD SAVE OUR KING AND QUEEN were always used for Royal celebrations - there are several instances in our 1937 Coronation film (link above) so it's unlikely that these decorations were for anything other than the celebration of someone's Coronation. But whose?

UPDATE:
Geraldine Williams has come up with a very plausible alternative theory:
She says, 'perhaps it was celebrating the Silver Jubilee of King George V in 1935?'
Which would explain why the photo has more of a 1930s feel to it than an early 20th Century one. It would also explain the fact that the King has a beard in his photo on the shop wall.
Geraldine goes on to say, 'I got this information from Google, which bangs on about 'the rapturous Silver Jubilee celebrations'. I wouldn't want you to think I go that far back - well, not quite, anyway! By the way, I think the beard was a relic from his naval career. According to a TV programme I saw his wife, formerly Princess May of Teck, was brought over to marry his brother, but he inconveniently died before they could wed, so she got landed with George instead. Very Mills & Boon! George was also responsible for the change of the family name to Windsor, because of World War I.
And Middlewich photographer Jim Moores has sent us this picture of a souvenir mug which his Dad was given as a 13 year old to commemorate the Jubilee in 1935. 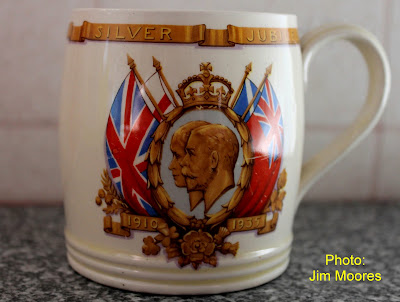 Many thanks to Geraldine and Jim for this additional information.
So given that, as seems likely, Hulme's was all dressed up for the Silver Jubilee in 1935, it would also seem likely that the decorations would go up again for the 1937 Coronation.
Hardly seems worth taking them down, does it?

Notice the large shop to the left of Hulme's. This was demolished at some point to enable a driveway to be created to the car park behind the Kings Arms - rather unnecessary as there is a perfectly good car park entrance just around the corner in Queen Street.
The gap was filled in again when the pub was extended in the 1980s, leaving just a narrow walkway to the back door of the pub.

Hulme's Grocery is no more, but the building still exists and continues the tradition of topical and festive window displays as THE ACCORD CLINIC