EXCLUSIVE: GLIMPSES OF MIDDLEWICH AND WINSFORD IN THE 1960s 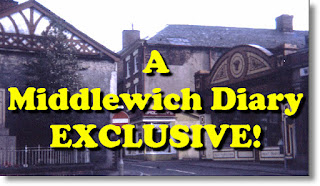 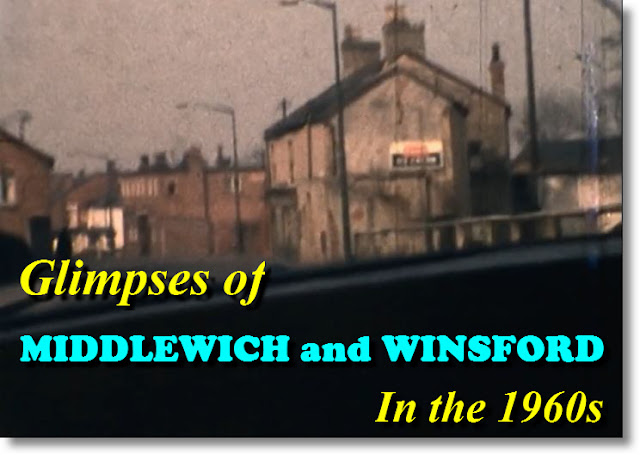 '....each a glimpse, and gone forever...'
-Robert Louis Stevenson

Courtesy of Bill Armsden and John Bailey here's a rare chance to see a few fleeting glimpses of Middlewich and Winsford as they were towards the end of the 1960s, captured on 8mm cine film and digitised so that we can enjoy them today. The scenes we see here are just part of a longer film chronicling a family day out at Chester Zoo, circa 1968, and offer us the chance to see our town at the very end of what we like to call its 'salt town days' (the open pan works all having closed in 1966/7) and before major housing development and 'gentrification' started in earnest. There are also some glimpses of Winsford taken at the same time.


We start in Booth Lane, and ahead of us is the bridge over the canal junction. To the right is that long-gone building which once stood at the junction of Booth Lane and Brooks Lane (currently causing much controversy as drivers choose to ignore the 'one way' restrictions on the bridge). For many years the building housed a bakery, but the Lyons Maid ice cream sign shows us that this film was made in the period when the shop was operated by Clarence Costello and his wife Mary. Costello's had shops in various parts of the town, including Kinderton Street and Wheelock Street, at various periods in the town's history.
If you inspect the Booth Lane side of the bridge today, you'll see that the wall once curved round to join the canal-side wall of the shop.
Next we leap ahead to Lewin Street, and get a glimpse of the CofE Infant School on the right.
And this is where we know we really are in the past because, instead of bearing right to go down into Leadsmithy Street and the Junction with St Michael's Way, we go to the left to pass over Hightown and thus into the town centre.
Dead ahead is the old Town Hall and a row of shops where the amphitheatre is today.
In the town centre we see Dewhurst's butchers shop and, to its left and set back from the road, the Vaults, the sign for which can be seen on the end wall of the shop next door. Those two shops are still there,and are now both hairdressers. The one on the left we made famous a few years ago as 'Sharon's cafe'
We turn into Wheelock Street and again we know instantly that we're looking at a scene from many years ago, as the traffic is travelling both ways.
Notice, on the right, the Davies School of Motoring in just one of the row of shops which are now given over completely to the justly famous Temptations business.
Ahead of us to the right we can see a building which spent many years as Brooks & Bostock, after its move from just across the road. On its end wall can be seen another long-vanished Middlewich sight, the billboard advertising the many delights of Belle Vue.
Now to Chester Road, and, on the left, where now we find Morrisons, is Middlewich Motors with its Mobil Garage. Beneath the Mobil sign you might be able to catch a glimpse of another sign saying Boosey's Nurseries.
Next we're on Spital Hill, climbing towards Winsford. Of all the locations in this short film, this is the one which has changed the least.
Next we're approaching the bridge just before Winsford Station (or, as older people will know it, Gravel).
Here we turn right for a pit stop at the Railway Hotel, which once sported a sign depicting a slightly wonky looking Stephenson's Rocket, and is now known as the Brighton Belle.
And next we're in Winsford High Street, before the dual carriageway was driven straight through the heart of the town. Unfortunately for us, the camera concentrates on the right hand side of the road, showing us the Brunner Guildhall and other buildings which are still very much with us. There are, though, tantalising glimpses of the now-vanished left hand side of the High Street.
And so this all too brief glimpse into the past comes to an end as we take the old road out of Winsford and head for Chester and the delights of its famous zoo.
You'll notice the road signs, which give us a clue as to the age of this film. This type of sign, so familiar to us now, was only introduced in the early to mid-sixties, so would have been quite new at the time of filming. They look a little incongruous here, surrounded as they are by much older road infrastructure.
Of course we have to remember that the scenes of Middlewich and Winsford seen here - all of them just a few seconds long - were just 'setting the scene'. They were included in the finished film (which was, don't forget, a record of a Middlewich family's trip to the zoo) to show where that family travelled from on their day out. There was no thought of capturing Middlewich and Winsford 'for posterity'. At least we don't think there was.
Apart from anything else 8mm cine film was very expensive and the majority of it would have been saved for filming the animals at the zoo.
But aren't we glad the cameraman/woman* decided to expend just a little of that precious film on the journey?
* Apparently it was either John Bailey himself, or his wife doing the camera work.


Our thanks to Bill and John for going to the trouble (and not inconsiderable expense)
of rescuing this rare film for posterity and also granting the Middlewich Diary the privilege of bringing it to you.

Sadly, since this Diary entry was published both Bill and John have passed away. We`d like to dedicate this Diary entry, which we know will be enjoyed for years to come, to their memory. Ed.

Email ThisBlogThis!Share to TwitterShare to FacebookShare to Pinterest
Labels: ARMSDEN BILL, BAILEY JOHN, GLIMPSES OF MIDDLEWICH AND WINSFORD CIRCA 1968, VIDEO OF MIDDLEWICH in 1968