(ORIGINAL DATE OF THIS DIARY ENTRY 25/02/2012)
by Dave Roberts
This diary entry has been revised several times as I tried to reconcile what I thought I knew (and remembered) about Murgatroyd's  Works with what is shown in this photograph from the Carole Hughes Collection.

The Murgatroyd's Salt Works in Brooks Lane is  familiar  to those who study the history of the local salt industry, but what concerns us here is that part of the works in the centre of  this aerial view alongside the railway line.
When Murgatroyd's closed in 1966 (the first of the four then remaining open pan works to do so) the works as we knew it consisted of the buildings in the lower middle of the picture and a few ancillary buildings including the wagon repair shop and, of course, the building housing the no 2 brine pump, which is being preserved to stand as a representation of the town's long history of salt making. Incidentally the pdf document about the brine pump which we have linked to includes a plan of the site at its fullest extent, but  with no date.
In the 1980s the Cheshire Museums Service published a poster featuring a cut-away diagram of the works showing how it was constructed and how it operated.
The poster can be found on page 37 of Wych & Water (Middlewich Vision 2009) by Tim Malim and George Nash.
This book, incidentally, is a must for anyone who wishes to learn about the Middlewich Salt Industry - and the canals which served it - and is available for purchase from Middlewich Town Council.
The County Museums poster shows the works as it was at the time of its closure and includes the buildings seen in the section of our main photo shown below:
This section of the photograph is remarkable similar to the view of Murgatroyd's in the Cheshire Museums poster; so much so that the diagram must have been based on the photograph.
But the poster is titled 'Murgatroyd's Open-pan Salt Works Middlewich 1889-1966' and there is no indication that we are only looking at a part of the works.
So when was that large section of the works running along the railway line built, and when did it disappear?
Turning once again to Wych & Water and the invaluable series of maps showing the comings and goings of the various salt works in Middlewich over time, we can see that it  appears in the 1898  OS map (dated as 1889) and is  included in the 1909-14 and 1939 OS Maps.
So it must have been built some time between the years 1889 and 1898 and been closed some time after 1939.
It may well be that the remains of this part of the works was still there in the 1960s, but I can't remember them.
Another interesting point is this: what has happened to the network of railway lines which are shown on all the OS maps from 1898 onwards?
There were, from the late 19th century (possibly from the earliest days of Murgatroyd's), connections to the LNWR Sandbach-Middlewich-Northwich branch line, (via The Salt Siding from 1918), serving the ICI Mid-Cheshire Works and Murgatroyd's.
In fact the works (the part which survived until 1966) was, at one time, circled by railway tracks in a way which irresistibly reminded us of a model railway layout, as shown in this section of the OS map of 1907/8 (with additions to 1938): 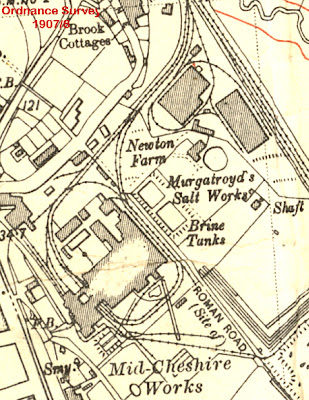 The tracks in question must have been removed  before 1966, possibly during the 1950s (Murgatroyd's were certainly using road transport during that period) or even earlier, leaving only the connection to the ICI Works, running behind the Scout Hall, across what is now 'Road Beta' and through the wrought iron works gates, which survive to the present day as part of Pochin's premises.
The ICI works itself was closed in 1962, but the rusting railway tracks lingered on for a few years after that.

Which puts the date of our main picture somewhere after 1939 and before 1966.
So what is intriguing me is this: was that  vanished  section of Murgatroyd's Salt Works still there as late as the 1960s?
When did it actually close down, and when was it demolished?

Geraldine Williams: See what you mean about the likeness to a model railway layout. It also strongly resembles the 'paperclip' pattern made by the planes when they are put 'on hold' at Manchester!
I was also intrigued by the 'Roman Road (site of)' shown on the OS map. Has this featured in any of the Roman Middlewich literature?


Editors Note: It appears that Newton Farm (later to be the site of Murgatroyd's Works) had well recognised Roman connections, and that may be the reason why Murgatroyd bought the site, possibly reasoning that the Romans must have identified a source of brine nearby. Follow the link to 'No 2 brine pump' for more on this from Kerry Fletcher's Middlewich Heritage site.

We're grateful to Kerry for the following additional information:

Just a couple of notes for you. The last salt lump at Murgatroyd's was produced in December 1966, Manchester Evening news came to take photographs of the last shift.

Demolition was in 1968 with the famous Common Pan Chimney coming down in April 1968.

The Open Pans were in operation for 76 years almost to the day, as the first salt lump was produced as the New Year of 1890 was seen in.

I don't know the exact year of when the railway side buildings disappeared, I'll find out for you but it must have something to do with the fact that the Common Salt Pans were last used in 1962-3. I have a picture of common salt being tipped into the wagons below from those buildings. As vacuum salt was being produced at the main factory I suppose those buildings wouldn't be required for anything.

I've discovered quite a few photographs taken around Seddons and Murgatroyd's, some taken by people who worked there, some publicity shots taken by local but now closed photography businesses, some by the papers and the aerial shots were by airview of Manchester or similar company. hope that helps.
Here's one of the photos mentioned by Kerry: