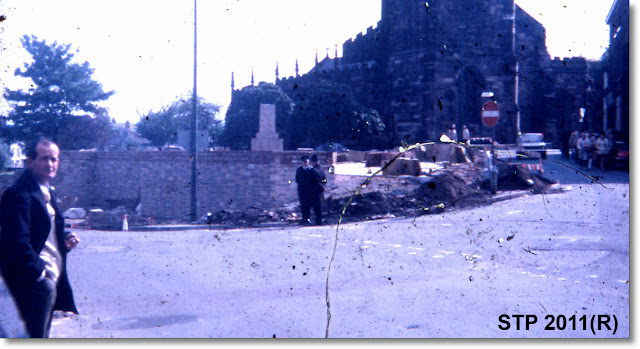 It's That Man Again! The partly built Middlewich Piazza in 1972, and our old friend George Robinson (left) in his quest to try to be on every photo I ever took, observes the passing Middlewich scene after, no doubt, having just emerged from the nearby Vaults public house.
The massive Colditz-style retaining wall by the bus-stop is complete, but the steps and the bleak, uneven acres of dodgy-looking paving slabs (in sickly shades of white, pink and yellow) have yet to be put in place.
Interestingly, the War Memorial has already been placed in its new position and traffic flow over Hightown still runs from Lewin Street to Wheelock Street.


If you look carefully to the right of that massive 'Colditz' wall there appear to be two policemen, obviously guarding this new gem of modern urban architecture from possible malefactors.
Well, maybe not, but at this distance in time people seem to have forgotten the outright hostility this unlovely and unloved development engendered. It was universally despised and loathed by one and all and, when it was replaced by the current 'Roman amphitheatre' in 2005 the whole town breathed a sigh of relief.