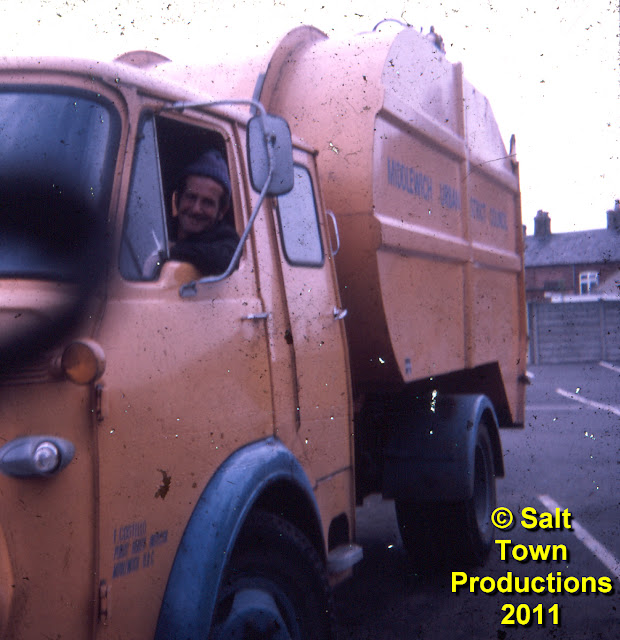 For your delight and delectation, another shot of Middlewich UDC's 'Orange Wonder' dustcart in all its 1973 glory, this time showing its driver George Robinson, who was the brother of the legendary Middlewich barman Frank. On the vehicle's door (lower left) is the legend 'Frank Costello, Public Health Inspector, Middlewich UDC'. Frank was a member of the well-known local grocery owning Costello family. The weird circular black shadow on the left of the photo is the camera strap, a feature I still manage to include in the occasional photo to this day.


This photograph was first published on Facebook on 21st may 2011. The original Facebook feedback is featured below:


Jonathan Williams A reflection on 'The Dustbinmen' Granada TV series c 1969.Their dustcart was labelled Thunderbird 3.. surely given that it was brown and carried a load of stuff, it should have been TB 2. (TB3 was a rocket).No matter.George is doing a passable imitation of 70s icon & legend Dick Dastardly, of Wacky Races & Catch the Pigeon fame. Could never comprehend why George was shiny on top but Frank was 'with turf'.I shall come back to this scenario in due course.Costello influence went way beyond public health btw!


Dave Roberts Yes. Clarence Costello was Chairman of the UDC for many years, of course. As for the mystery of Frank Robinson's hirsute appearance, it's perhaps best not to speculate. In the end, though, it was - quite literally - a case of 'hair today, gone tomorrow'.


Geraldine Williams Coincidentally, last night I met one of Frank Costello's granddaughters, whom I'd not seen for many years, in her home parish, St Columba's in Chester and we were reminiscing about family history and how Frank and Josie came back to Middlewich from Belper to take up the post with MUDC.


Dave Roberts Oh yes. Dierdrie was in a lot of TV shows, including 'Crossroads', 'I Didn't Know You Cared', 'Not On Your Nellie', 'On The Buses' and many more. She always played 'brassy blonde' type parts.


Geraldine Williams  Deirdre's celebrity status is that she went to school with me!!! Ha ha!
She was also in 'The Full Monty' and according to her niece (see above) is now living in Buxton and is involved with theatre groups there.

We always called her 'Deardrie' but her mother Josie always pronounced it 'Daredrie'.......

Posted by SALT TOWN PRODUCTIONS at Wednesday, May 30, 2018