BEFORE THE MIDDLEWICH DIARY: SALT WORKS AND CANAL 1969 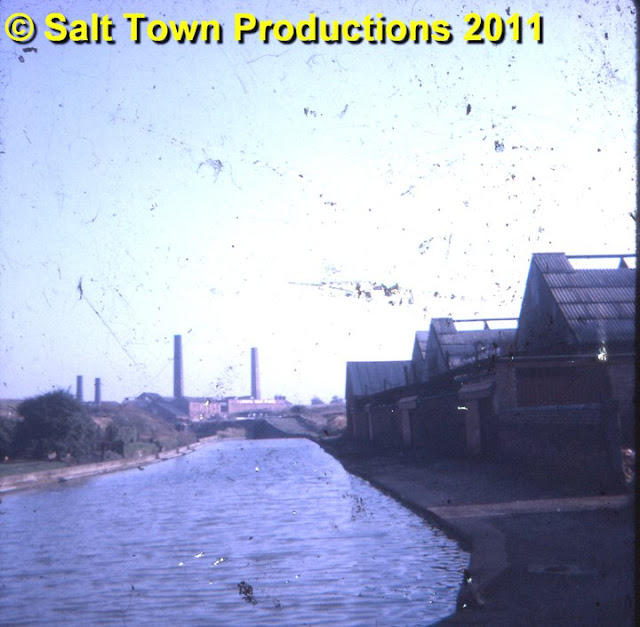 End of an era. It's 1969. The Seddons works have been out of production for two years, but are still largely intact. The Trent & Mersey Canal has reached the end of its life as a commercial carrier and, for the moment, all is quiet and tranquil. The Wych House Lane Works (right) will be demolished and (eventually) give way to a lawned area below the Salinae centre, filled with market stalls and amusements come festival time. The Brooks Lane works in the far distance will become the home of Tarmac Readycrete and the only one of the Seddons premises to remain recognisable as a former salt works. The canal is already being used for pleasure boating, and this will increase over the years until there are far more pleasure boats than there ever were working boats.

Note: For a closer look at the Brooks lane works as it was at the time and as it looked in 2017 go to:

Dave Roberts Beyond the Wych House Lane works on the right was the remains of another, earlier, salt works. My Dad took me to see it when I was a small child and one of its chimneys was still standing. This area is now the premises of Andersen Boats.

Jonathan Williams It's amazing, given the heavy industry of the past, just how rural the aspect of this stretch of the cut appears today. Who'd have ever expected a wildflower meadow and nature trail in the middle of the Flight of Three locks?

Dave Roberts Yes. indeed. It's a credit to everyone who's worked so hard to make this town so pleasant. A walk into town via the towpaths is a pleasure these days.
...of course, you'll always get some people who think these things just happen of their own accord, and aren't planned and discussed and worked on for a long time before they come to fruition.

Posted by SALT TOWN PRODUCTIONS at Saturday, May 26, 2018