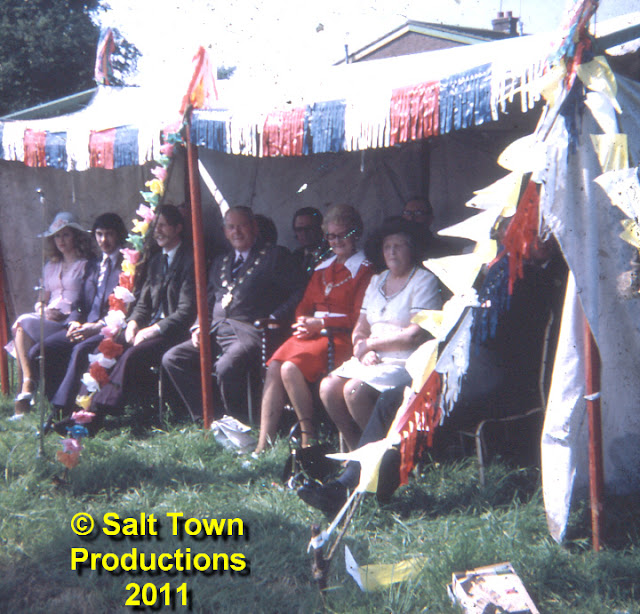 Looking rather like warlords at a medieval jousting tournament this group of civic dignitaries shelters from the sun, and the great unwashed, under their personal awning at the Middlewich Carnival in 1973, which was, as we've already learned, held at Manor Park, not far away from where I'm typing this.
They are (left to right) : Julie and Derek Millington, then (I think) Sandbach Councillor David Lloyd Griffiths(can anyone confirm this?) the then MUDC Chairman Frank Bailey, Mrs Bailey and another lady who may possibly be  Mrs Lloyd-Griffiths, separated from her husband so that Cllr and Mrs Bailey can take centre-stage and make a pleasingly symmetrical picture. Behind them is another tier of lesser dignitaries, consigned to the shadows.

Derek Millington was one of our livelier and most effective councillors and I spent long hours talking to him in various local hostelries. I'm sure he won't mind me passing on just one of his recollections of life as a councillor:

Derek was a member of the Middlewich Cemetery Committee (known, at that time as the Burial Joint Committee, or something similar) and it was the policy of members to make periodic inspections of the cemetery.
One evening, after a prolonged period of heavy rain, the committee was inspecting a newly-dug grave which was half-filled with water.
'A very good, idea,' said Derek, 'what you might call a fail safe. If the poor bloke we're burying  isn't dead  we can make sure he doesn't cause any trouble by drowning him.'
A shocked and offended council issued a stern letter of rebuke to Derek.

I could sympathise, having once received such a letter of rebuke  myself  for the heinous crime of 'delivering rent books on a Sunday' - a clear case of  'if the Good Lord doesn't get you, the Council will'.

Nowadays Derek and Julie are leading lights in the Middlewich Rock & Roll Dancers, which are always well worth seeing in action. They all dance brilliantly and look fabulous.

Councillor Bailey was  the last Chairmen of the UDC and the first Mayor of Middlewich. He remains, to date, the only councillor ever to have chased me up the road after a long and heated argument in the Golden Lion. We were discussing the council's policy of attempting always to have 'the lowest rates in Cheshire' which, I said, was all very well as a policy, but had also led to the council having the lowest number of amenities in Cheshire.
The row got out of hand and culminated in Mr Roberts racing off up Chester Road with Councillor Bailey in hot pursuit. You couldn't make it up, could you?

Geraldine Williams Not sure it would be Mrs Lloyd-Griffiths - unless it's his mother!
Edna Bailey used to work at St Mary's, as did Betty Telfer so the school featured highly in the league table of consorts, or lady mayoresses, or whatever the term is. If I remember correctly, Frank Bailey died at home on the morning of Edna's funeral. What greater devotion could there be.

Dave Roberts The poor woman hasn't any discernible chain around her neck either. She should have been relegated to the back row, among all the other chainless wonders. But do we know if that is Mr Lloyd-Griffiths in the line-up? I can't find any images on the t'internet for comparison. Edna chased me up Chester Road, too, on that memorable occasion, exhorting her husband to 'hit him, Frank!' Such larks!

Geraldine Williams Hope he wasn't wearing his chain of office at the time.....!!


Jonathan Williams Looks like DLG with embryonic handlebar moustache and grandee beard to add. Yes Frank did die on the morning of Edna's funeral. He was indeed the last Chairman of the MUDC and the first Town Mayor of Middlewich; a unique accolade. Frank was a great help to this young pup when he started, and of course he, like several of the Councillors had known me since I was a boy. Nice tent though. And to think; only today we were wondering whether we could afford to put carpeting and banqueting furniture in the Civic Marquee at the Roman Middlewich Festival in September !! Plus ca change !

Dave Roberts I'm almost sure it is he. Who else would have looked like a young Gerald Nabarro at that time? Interesting to know that Frank bridged the gap between MUDC and MTC. I took another slide of Frank and Edna together on the same occasion, and the fact that he was the last UDC Chairman must have prompted this. Unfortunately the slide got slightly damaged in circumstances which may be revealed at a later date.


And, actually, now I have taken a closer look, I think I may be wrong about the lady on the right not possessing a chain. The old clicking and double-clicking trick shows that she may indeed have a very fine and delicate chain with small medallion attached, putting her firmly back in the civic dignitary category. It would be nice to know her name.

In fact, if you look even more closely, at the bunting-festooned guy rope on the right, there is a gentleman hidden among all the flags. What's the betting this is the Chairman of Sandbach, or Winsford, or Northwich UDC and our mystery lady is his consort, or whatever the correct term was?