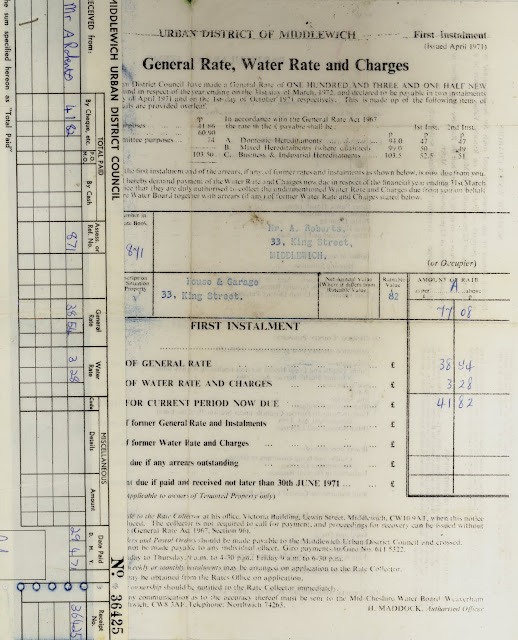 by Dave Roberts
My mother, fortunately for us, was from a generation which never threw anything away. This is why we're able to bring you another piece of Middlewich ephemera from forty years ago in the form of this Middlewich UDC rate demand for our modest family home in King Street.
The number 33 seems to stand out from the rest of the address, and there's a good reason for this; the ADREMA (See below) plate for our address had been altered because of the re-numbering of houses in King Street a few years earlier.
No. 27 became no. 33 and we received a letter threatening all kinds of retribution if we didn't change the number on the front of the house. In fact I'm not so sure that the death penalty wasn't still in force for failure to change your house number when told to do so.
The interest, to me, lies in the technology used to produce this most unwelcome of bills and its receipt which is a far cry from the slick computerised systems we have today.
Notice that the total payable for the year is £77.08 for a three bedroomed semi (or 'domestic hereditament' if you will). Oddly, this still sounds like a lot of money, considering that we are talking about the early 70s. The other amount, of £3.28 for the half year, was nothing to do with the council but was a charge for water rates collected by the council on behalf of the Mid - Cheshire Water Board.
The receipt is signed by Collecting Officer 'D. Roberts'. This is no coincidence, but proof that I was, at least, in gainful employment forty years ago at the age of 19. The square space on the receipt was where stamps were stuck on and signed over for certain transactions. Stamp duty on these receipts was abolished during my time at the council.
But it's the rate demand itself, and the way it was produced, which brings back memories and is so evocative of long-vanished ways of working in the pre-computer age.
The blank rate demands were produced for us by the clerk's department on a photocopier, a different coloured paper being used for each year to save confusion (and prevent  anyone paying the same bill twice).
Many of the Council's documents, such as minutes, internal memos etc, were produced on stencil machines
(usually made by Gestetner), using a complicated process involving typing on a special sheet (the ribbon selector on an office typewriter had three settings: black, red and stencil (which, in fact, kept the ribbon out of the way and enabled typing direct onto the stencil sheets).
But if I remember rightly these rate demands were too complicated to be run off on Gestetners (although it could be done) so a rather inefficient photocopying machine was used (even allowing for forty years of deterioration, you can tell that the print quality was only just adequate).
Then came the fun part. The addressing of the rate demands was done on our ADREMA machine, made by a German company (ADdREssenMAchine, or something of the kind) and which had been pioneered during the war by the Germans for the registration of prisoners of war.
Basically the system was that every rateable property in the town had its own ADREMA plate - an aluminium plate with the name and address pressed onto it, forming a collection of printing plates which were then stacked up on a machine with a massive operating handle which you brought down with a huge crash to print the rate demands. Obviously, when ownership of a property changed we had to have the details on the plate altered which involved sending the plate off to the factory to be flattened and re-pressed with the new details. This, of course, could be highly frustrating if people moved into a house and only stayed a short time, necessitating the re-pressing of the relevant plate time and time again.
It must be appreciated, though, that this system could only print the addresses. The actual figures on the demands were hand-written by Rating Officer Bertie Maddock and were actually copies of  entries in the Rating Ledger which was precisely that - a huge book with details of every rateable property in Middlewich hand-written into it. This had to be balanced each year, with the amount received exactly matching the amount due.
This document was one of the first batch of rate demands the MUDC issued in decimal currency. The new system had been introduced in February and all the council staff underwent training at Crewe College over a period of six weeks so that we would be conversant with pounds and pence (or pee as people still annoyingly insist on calling them) when they replaced pounds, shillings and pence. We were even given 'homework'. 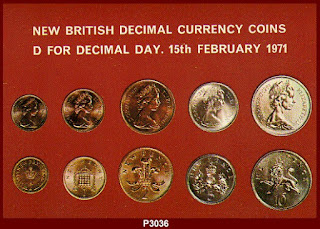 The idea was that we would be able to help the elderly who, it was thought, would end up hopelessly confused. In the event no one, however elderly, had any problems at all.
Incidentally, on 'D-Day' (the 15th February 1971) rating officer Bertie Maddock told me that he would serve our first 'decimal customer' but, in the event, he was out of the office when the historic moment came, and the honour fell to me.
Middlewich UDC's method of issuing rate demands was a clumsy and unwieldy system, made instantly redundant just a few years later by computerisation, but twice a year our little rates office more closely resembled a small factory and echoed to the bang and crash of the ADREMA machine. I'm wondering if my current problems with my right arm can be traced back to this time, and if it's too late to sue the council...
We'll be hearing more about life in the council offices in due course.

Geraldine Williams I remember those scary Rate Demands - and running the gauntlet of Bertie Maddock's glare if you were a day or two late in paying. He seemed to mellow after he married Freda! We had a Gestetner in school and spent many an hour cranking the handle on the side and thought we were quite advanced, but oh the joy of using the electric model in the Presbytery

Dave Roberts Well - I suppose I can say this now - you should have tried working with him...

Jonathan Williams The Town Council were still using a Gestetner machine when I started in 1985. Took me days to complete a set of minutes. Covered head to toe with black ink and correcting fluid I was!!

Dave Roberts  I know. I had one in my garage when I was at Mottram Close,passed on by Frank Smith of the Heritage Society - the idea was that the Society's Newsletter would be produced on the thing. Not a hope. The machine and all its ancillary equipment took up all the space where the family car should have been and was always subject to the law of diminishing returns - hours and hours producing one page on a stencil; seconds for it to be destroyed by a malicious and malevolent Gestetner machine.
‎...and don't get me started on the convoluted workings of the Kalamazoo wages system. I can only recall doing the dustbinbmen's wages once (I don't think they'd let me do it a second time) and the nightmare haunts me still. Got away with it, though...