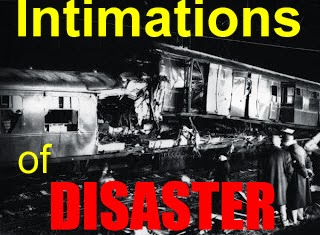 Like most people I have never seen a railway accident, and hope I never do but, many years ago, on a bitterly cold evening in the winter of 1962-3 the Roberts family witnessed something  which we couldn't at first account for, and the explanation for which only became clear to us as the story of a disaster unfolded before us on our TV screen.


It was Boxing Day, Wednesday the 26th December 1962, and we were all huddled around our ten-year old black and white television set.

Snow had started to blanket the country just before Christmas and the famous Big Freeze would set in in the New Year, lasting through until March without a break. Almost the whole of England and Wales was frozen solid for weeks on end, bringing the country to a virtual standstill (and, incidentally, delivering a crippling blow to the canal carrying industry).

On this night, which was clear and very cold, we hadn't drawn the curtains on our living room window, which overlooked our back garden, Middlewich gasworks and Seddon's salt works.

A few miles away, beyond the town, were the outskirts of Winsford where the West Coast Main Line ran on its way from Crewe to Liverpool and Scotland. The line had only recently been electrified and brand new colour light signals, some of them automatic, controlled the new electric and diesel hauled trains.

Suddenly, shortly after six o'clock, we saw a vivid  flash of light in the night sky above the salt works.We  were all stunned for a few seconds and at a loss to account for what we'd seen. It was rather like a flash of lightning, but, it seemed to us, about ten times brighter and a deep, vivid blue in colour.

We had to assume that it was some kind of strange meteorological phenomenon. There seemed to be no other explanation, but the experience was, somehow, deeply unsettling.

We continued with our television viewing (I'd love to know what programme was on that night. We only had a choice of two channels - BBC TV and Granada (with ABC TV at the weekends). I wonder what we were watching?)

I do know that, about an hour after we'd seen the bright blue  light in the sky, the programme was interrupted by a newsflash - something which doesn't seem to happen often in these days of 24 hour news but was a fairly common ocurrence back then when something really important happened. It was always rather nerve-wracking, especially when the NEWSFLASH caption was kept on screen for several minutes before any announcement was made.

A diesel-hauled Glasgow to Euston express had run into the rear of a Liverpool to Birmingham train at Coppenhall Junction, near to the former Minshull Vernon Station, just four minutes away from Winsford (drivers on the road to Nantwich pass close to the site when they cross the bridge a few yards away from the Verdin Arms).

Frozen points at Crewe had caused delays and the Birmingham train had been halted at a red signal. The driver of the London train had also been stopped by a red signal further down the line but, fatally, decided that this was a fault with the signalling (he had tried to phone the nearest signal-box but couldn't get through). He moved forward and, failing to see the train in front of him, crashed into it at about 25 miles per hour.

The bright blue flash we had seen just after six o'clock was caused by the last coach of the Birmingham train rearing up and striking the overhead wires. Eighteen people were killed and 34 injured in the crash.

This, it has to be remembered, was the time of transition from steam hauled trains to diesel and electric ones (although there were still plenty of steam-hauled trains on this and other lines in the North-West where steam wasn't phased out until August 1968) and the drivers and signalmen involved were all from an older tradition where things were done rather differently.

The driver of the London train was used to steam locomotives which could not 'make up for lost time' as easily as the new diesels and electrics, and was thus very anxious to be away.

The fact that the next signal ahead was at red should have told him that there had to be another train there but, unfortunately, this changed to a yellow as he approached. The brightness of this yellow signal apparently made it difficult to see the tail lights of the train in front. These factors, coupled with the atrocious weather conditions, had conspired to cause this terrible accident on one of the safest railway systems in the world.

The 1962 Minshull Vernon crash was the first major British railway accident which did not involve a steam locomotive.

It wasn't the first time that disaster had struck this section of railway. It had happened before, in 1948, and was to happen again (though with much less serious consequences) in 1999.

But none of us will ever forget that strange vivid blue flash in the sky all those years ago.

A more detailed account of the crash can be found here (pdf file) on the Railways Archive site,  and the definitive accounts of both this and the 1948 Winsford accident are featured in Disaster Down the Line by J.A.B. Hamilton (George Allen & Unwin Books 1967)

Philip YearsleyAs we had got off the train at Winsford after returning from Runcorn, I have often wondered about the facts of this accident.
I seem to recall hearing that a soldier on his way home on leave was travelling on the first train, and, as he lived in the Minshull Vernon area, pulled the emergency stop cord, then fled off over the fields.
Thanks for the info, Dave.

Geraldine Williams Yes, that was the tale we heard Philip. It must have been a rumour that spread round Middlewich. Glad to know it wasn't true.


Dave Roberts Sadly the story of the soldier is true, but it relates to the 1948 crash and not the 1962 one (the Winsford area has had three train accidents, 1948, 1962 and 1999). The soldier was coming home on leave and, realising that he was near his home in Winsford but that the train was not scheduled to call there, pulled the communication cord to stop the train. He then ran across the fields to his home. He later came forward and owned up. All he was trying to do was save himself the additional journey from Crewe Station back to Winsford. But he didn't cause the crash. A train brought to a standstill like this should be perfectly safe, but the train crew didn't take the necessary precautions to protect it and the crash happened. That soldier must have blamed himself for the rest of his life, but the train could have been stopped for any number of reasons. It was a million to one chance that his actions should have resulted in disaster.

Lindsey Daniels Thank you for publishing this story. I didn't know about it and found it an interesting read

Richard Maund contacted us during 2013 with a link to more information on the circumstances surrounding this tragic accident (see 'comments'). Here's a direct link to that information:

Following our re-publication of this diary entry on Boxing Day 2014 (the 52nd anniversary of the accident), Geraldine Williams wrote:

...this brought back some memories. We lived in Kinderton Street at the time and Jonathan (Jonathan Williams, the late Middlewich Town Clerk - Ed) was only seven months old. Father Down, our Parish Priest, called to see us on his way back from the Post Office. He'd just arrived when the Newsflash came on, so he had to rush off back to the Presbytery, as he was expecting he would be called out to the scene of the crash.

Darren Roberts That was a good read and very interesting. I'll admit I've not heard about this before. It just goes to show how easily mistakes can be made in bad conditions on the railways as well as the roads.

Joan Barnes I remember this train crash well, as I worked at Northwich Telephone Exchange when it happened. it was awful.
Jacqui Cooke I was only 12 years old, but my brother worked at Winsford Station signal box at the time.