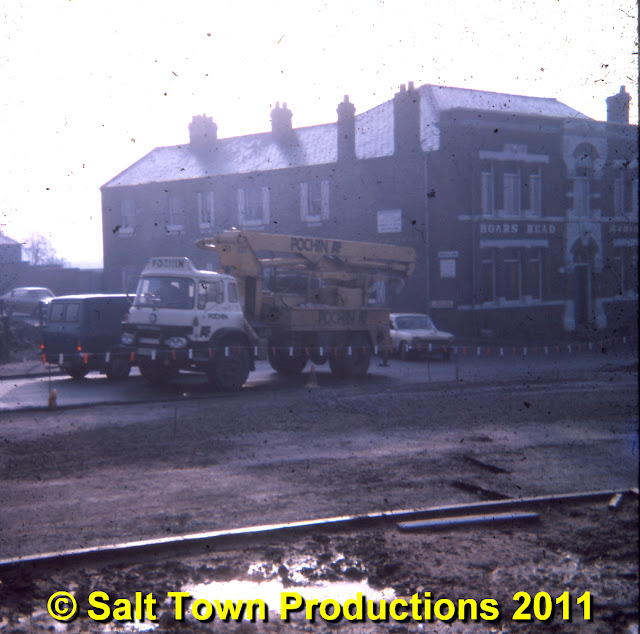 Yes. It's Kinderton Street once again, this time in the early part of 1975.
One of Pochin's concrete pumps negotiates the Brooks Lane junction.

All traffic, at this time, was still using the old road formation and we can see from this shot that this was noticeably higher than the new formation (between the kerbstones and the flimsy wire 'fence' with red and white markers, approximately where Whittaker's shop once stood, with Costello's to its right).

It's interesting to note that the piece of road where the concrete pump and the van are standing was once the total width of the Kinderton Street carriageway, taking large volumes of traffic to and from the M6 Motorway.

Presumably, once the new roadway was able to accommodate traffic, the old formation was closed and lowered to make both sides level. Or, alternatively, was the new formation built up to be level with the old one?

In the background, of course, looking a little beleaguered in the wintry weather, is the Boar's Head Hotel. Some alterations must have been made to the carriageway outside this esteemed hostelry, in order to create the small parking area and grass verge, along with re-modelled entrance to Seabank and its carpark, which we see today.

Although it is not too apparent from this photo, the exterior of the pub was looking a little sorry for itself at the time and has since been brightened up considerably. The original Victorian detail has been restored and hanging baskets decorate the front of the pub, regularly winning the establishment prizes in the 'Middlewich In Bloom' competition.
It's also bigger, with an extension, built in sympathetic style, to the left of the building as shown in this picture.

Out of shot to the left is a piece of waste-ground, formerly the location of houses fronting onto Kinderton Street and many years later to be the site of the 'Factory Shop'.