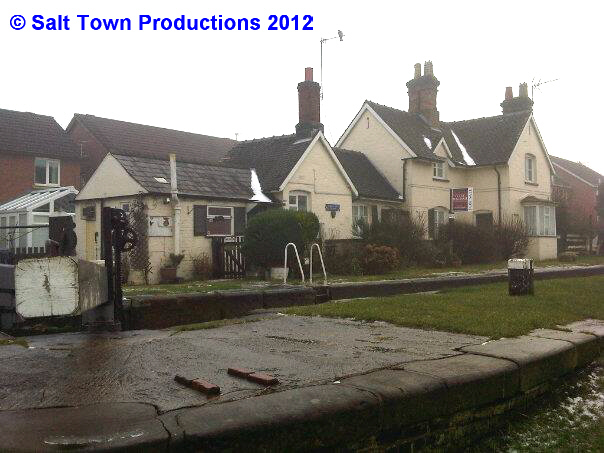 (THIS DIARY ENTRY WAS ORIGINALLY PUBLISHED on 19/02/2012)
Wardle Lock Cottage is, as its name suggests, situated at Wardle Lock at the very end of the Middlewich Branch of the Shropshire Union Canal.
In fact there are those who would argue that the lock, and the cottage, are not on the Shropshire Union at all, but on the Wardle Canal (also sometimes called the Wardle Lock Branch or the Wardle Green Section) which is often touted as 'the shortest canal in Britain'. The whole length, including the lock, is around 50 yards.
A stone set into the bridge over the junction between this short section of canal and the Trent & Mersey gives its name and date as WARDLE CANAL 1829. 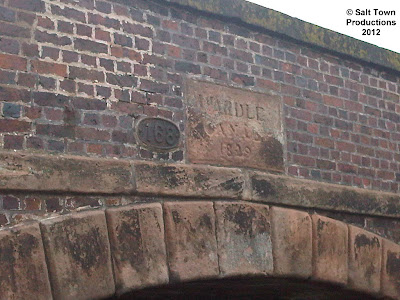 Canal enthusiasts still argue for and against the Wardle Canal's claim to fame as the shortest canal in Britain; some say it is a fully fledged canal in its own right, while others say it is an extension of the Shropshire Union Middlewich Branch

The Heritage Society appears to be in no doubt, and British Waterways seem to agree, if this plaque attached to the other side of the  junction bridge is anything to go by.
What is certain is that before it was built much transhipment of goods had to take place between the Trent & Mersey and the Middlewich Branch.
The Wardle Canal brought about a big improvement, but was not the perfect solution, due to the high tolls levied on cargoes travelling over it.
The cottage at Wardle Lock is a Grade II listed building, and is one of the treasures of the waterways.
A scale  model of it was a great attraction at a National Waterways Exhibition some years ago, and we know of at least one other small-scale representation of the building, on a model railway in Sandbach.
Part of the attraction until a year or so ago was the much-missed presence of 'Auntie' Maureen Shaw who lived there for many years after 'coming ashore' following  a lifetime of working on the boats.
Her late husband Jack was a lengthsman on the canals.
Maureen knew all there was to know about the waterways, and gave talks on the subject to local organisations.
She tells her own story in the Tales of Wych & Water CD produced by Salt Town Productions for Middlewich Vision in 2009.
During her time at Wardle Lock Cottage Maureeen made countless friends among the pleasure boaters who travel through Middlewich every year, and was always ready to give advice (and the occasional 'rollicking') to the novice holiday helmsmen and women who passed through 'her' lock.
Maureen was taken ill in 2011 and had to leave the cottage. She lived in sheltered accomodation for a while but, sadly, passed away on March 17th, 2012.
Maureen's knowledge of, and enthusiasm for, the canals of Middlewich and the world of canals and canal boats in general was unsurpassed, and she will be greatly missed by everyone  in Middlewich and also by all her friends on the waterways.
Kate Nicholls Fletcher says:
'As someone who has both lived and worked on waterways for over 25 years, I had the pleasure of meeting Maureen a number of times, but I really got to know her as the ex MFAB boating director.
I had the pleasure of listening to many of Maureen's stories about the old working way of life on the boats and she gave talks for us at the festival on numerous occasions. I can never thank her enough for encouraging me to 'go for it lass' when I told her about going for a job on the waterways and subsequently, after getting that job, she used to love it when when I brought a boat full of young people to her lock, to be taught the correct way of going through...a truly inspirational lady.'
Former Director of  the original MFAB Festival Liz Rosenfield says:
'She was everyone's Auntie! She told me wonderful stories of her life when we'd while away the hours in the Kings Lock - and in her evenings she'd come and talk to rooms full of people about her life...an amazing person - I am lucky to have known her and to have spent time with her.'
Robert Sheckleston remembers Maureen from the time she worked away from the canals at RHM Foods. 'She was a lovely lady,' he recalls.
When we appealed for a suitable photo of Maureen in order to pay our own small tribute to 'a true character of the waterways', our old friend Ian Murfitt, himself something of a scholar when it comes to canals, did us proud with this picture: 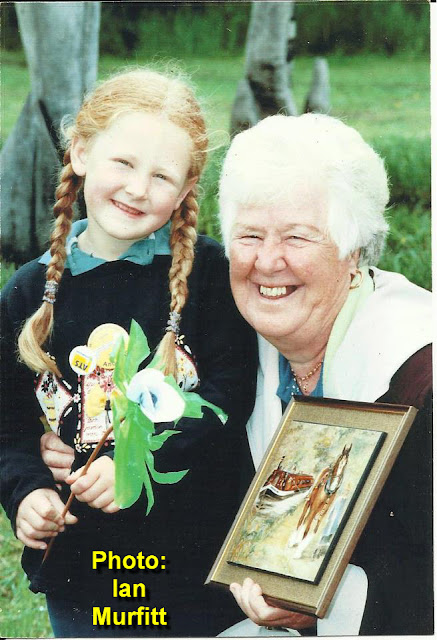 Ian writes: The picture shows Auntie Maureen and my daughter Charlee at a fund raiser for Anderton Lift about 12 years ago. Charlee lived with us on the boats for many years. There was much excitement amongst old boaters when her birth was announced and many visited and put silver (coloured) coins in her hands.

Wardle Lock Cottage remained empty for a year and then, on Wednesday 15th February 2013, was sold at auction at the Boar's Head Hotel by Frank Marshall of Knutsford.


P.S. The houses seen behind the cottage in our picture are on what was formerly known as Back Field, as discussed here


Geraldine Williams Always a good stopping point for my family on Sunday afternoon walks along the canal. I remember Maureen having an unusual flat-backed goldfish bowl fastened to the outside wall with two hemispheres and a connecting tube for the goldfish to swim from one to the other. I also remember how concerned she was by the lack of safety procedures shown by some of the new breed of boaters using the lock and their seeming unawareness of the dangerous undercurrents when the locks were being operated.