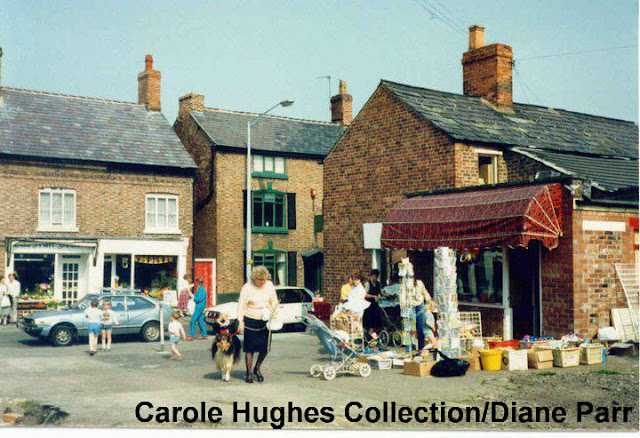 by Dave Roberts
Our forays into Middlewich 'twenty-five years ago', with material supplied by Carole Hughes and Diane Parr, have taken longer than was anticipated. So technically we're talking about twenty-six years ago now, but I don't suppose anyone will mind too much.
The photo above poses something of a puzzle.
That shop, tucked away at the back of what is now Gallery Finance towards the top end of Wheelock Street, seems to be selling all kinds of things from cardboard boxes and plastic tubs out in the sunshine. Can anyone remember what that shop actually sold? Or is that outdoor display of goods perhaps independent of the shop itself? Can anyone enlighten us?
When I first saw this picture I couldn't recall whether the shop we are talking about was still there. Our modern-day shot (below), taken in the Autumn of 2012, shows that it is, though it seems to be empty.
On the other side of Wheelock Street can be seen two shops (although I think they were linked together and were both dedicated to the sale of greengroceries).
They've both since been incorporated into that fascinating shop called Temptations which seems to have grown a little bit bigger every time you visit it. To the right of these shops, the house with the green windows was, at the time, being used as a kind of antique shop by Ian and Margaret McQueen. It's now been turned into flats and is linked to the large housing development on St Michael's Way next to the telephone exchange. 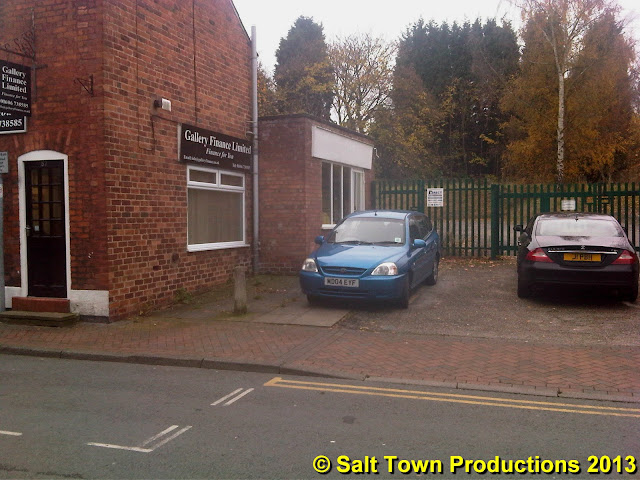 This is the best I could do for a modern comparison shot, as the green iron railings rule out any attempt at taking a picture from the same angle. Our mystery shop lurks despondently at the back, dreaming of better days.
The railings are fencing off what used to be the car park for Pace, an offshoot of the old Cheshire County Council, which was just out of shot to the right, next to the Co-operative Travel Agency.
This area of Wheelock Street will change radically once Tesco implements its plans for a large new supermarket on land behind the trees in the background.
UPDATE: Sadly not. Tesco announced in the first week of January 2013 that they had abandoned plans for the new superstore, leaving a large tract of blighted land filled with dilapidated former luxury homes right in the middle of the town. See BROKEN DREAMS...

Well, I may not remember this shop, but many people do, including those who posted comments on Facebook after reading this entry.
Sammi Hatton says, 'I recall this being a card shop at one time, run by Barbara Wells and called, I think, 'Best Wishes'. I used to baby-sit for them when they lived in a flat above the Co-op Travel Agency for a while. I also recall a dry-cleaning business being there too. Hope this helps?
Well, it certainly does.
Brendan Conlon  remembers the shop as 'Kev's Corner'.
This is confirmed by Emma Louise Brown who says, '...it was called 'Kev's Corner and it sold all sorts of stuff - gifts, toys crockery and cards - in fact I think it later became a card shop. I think in 1987 it would still be Kev's Corner. They sold all kinds of gimmicky stuff and when I was a child it was one of the few places you could spend your pocket money on rubbish such as water pistols, trading cards and  those things you threw on the floor which went BANG!
Stuart Warren Twigg has been studying the photo itself and says, 'I think that the items outside of the shop are indicative of what was for sale inside (there certainly appears to be a rack full of greetings cards in the picture -ed) Didn't the shop belong to Barbara Wells, the wife of Steve who had what is now Chisholm's Newsagents?'
Jenny Hatton says, 'I can't remember the shop like this, but I do remember a dry-cleaners at some point. I went to school with Simon Wells, so I do remember the family. I've got a really vague memory of his Dad running a fishmonger's from the shop in front of it - or at least fish in freezers? - can anyone else remember this, or have I made it up? I would have been seven or eight then, so it's a bit fuzzy! I do remember that fruit and veg shop which is now part of Temptations - didn't they have a sweet shop to the side of it as well?'
So it would appear that during the period of this particular photograph this little shop was called 'Kev's Corner', selling all kinds of items, including cards, but later concentrated on cards, probably under the name 'Best Wishes'.
Stephanie Burton actually worked in the shop. She says,: 'I'm not sure what it was in 1987 but in 1985/6 it was called 'Kev's Corner' I had a Saturday job there. It sold all sorts from stationery to household bits and bobs, as well as things for kids to spend their pocket money on.'
Going back to the 1987 photo itself, Chris Koons has a theory about all the goods outside the shop: 'It looks to me like they're having a clearance sale.'
I wonder if this was the time of transition from 'Kev's Corner' to 'Best Wishes', and all the surplus stock was being sold off?
Geraldine Williams says that she does not remember this particular shop from the time when she lived in the area: 'The shop with the sun canopy that you're enquiring about didn't exist then. It seems to have been tacked onto what was always a private house.'
Geraldine goes on to say, 'It's lovely to see Carole's picture showing the two shops across the road. This was our family home from the late '40s to the late '50s as my parents ran a business from the shop on the left. My bedroom was the one over the small-paned shop door but the other bedroom also belonged to our property and the lock-up shop below was rented by an optician who came to Middlewich twice a week.'
Both Geraldine and Stuart Warren-Twigg were interested in the house with the green windows:
Stuart remembers it as 'Cobweb Antiques' and mentions that it was the former home of Reg Taylor.
Geraldine goes back even further: 'it was owned, prior to Reg Taylor, by G F Pugh who ran his joinery business from outbuildings at the back of the property. He also made coffins! The shops, and his house, had long gardens which ran down to the corner of Pepper Street and Webbs Lane.'
So another gap in my knowledge of Middlewich has been filled! Many thanks to everyone who sent in this information.