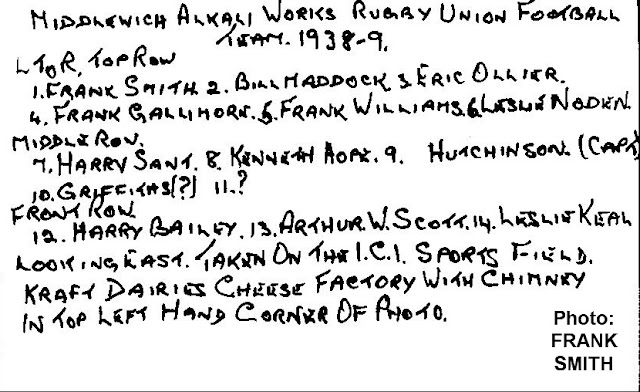 
Here's another offering from the collection of the late Frank Smith of Ravenscroft which, pleasingly, has Frank himself in the line-up and includes his informative notes too.
Once again it has been forwarded to us by Bill Eaton who whiled away many hours with Frank reminiscing about old Middlewich.
Frank spent a lot of his working life in the local chemical industry and had a wealth of knowledge about Brunner-Mond and I.C.I. and their connections with the local salt industry.
This photograph shows the Middlewich Alkali Works Rugby Union Team line-up for the 1938-39 season, quite possibly the last until the end of World War II.
Just look at all those 'old Middlewich' names: Ollier, Gallimore,Bailey, Sant, Noden.
Unusually, though, no one called Hough.
I was particularly interested to see that the team included Arthur W Scott. My late father had a friend called Arthur Scott, and I wonder if this is the same man? Rather a coincidence if he isn't.
The scene is the ICI Sports Field, also known as the 'Station Field' and home to several local events such as the Middlewich Show and Middlewich Carnival.
As late as the 1960s it was still a popular venue for travelling fairs and circuses and eventually became the home of the Dennis White Foundation.
The field long ago gave way to modern industry as part of the Midpoint 18 estate.
Frank helpfully allows us to find our bearings by pointing out the chimney in the left background which was part of the Kraft Dairies Cheese Factory which, along with the Nestles Condensed Milk Factory in the late 19th and early 20th centuries, took advantage of the availability of high quality milk from the numerous farms in the area.
That chimney was approximately where the Shell Garage on Holmes Chapel Road now stands.
If you know the name of the number 11, or have information on  any of the people in the photo, please let us know in the usual way. 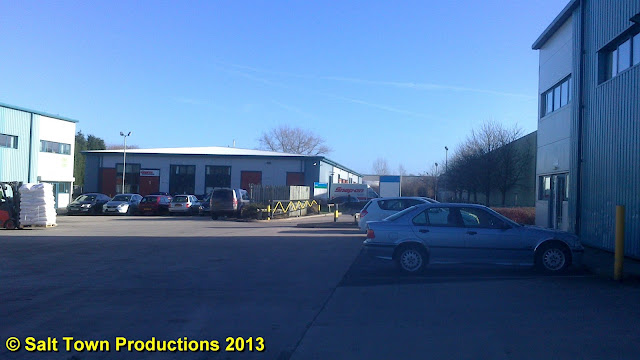 As can be imagined it is almost impossible to find the exact spot where that Rugby team of nearly three-quarters of a century ago was standing. This photograph, taken on the morning of Friday February 1st 2013, is the best we can do.
The field has gone and been replaced by the vast sprawl of the Midpoint 18 industrial estate.
The present day Shell Garage, former 'Little Chef' restaurant* and Travelodge which are built on the site of the Kraft Cheese factory lie just beyond the low building with the white roof.
The Rugby team may have been standing somewhere near where this car park is now.
The building on the right belongs to Vion Foods.

Many thanks once again to Bill Eaton for the original photo and information.