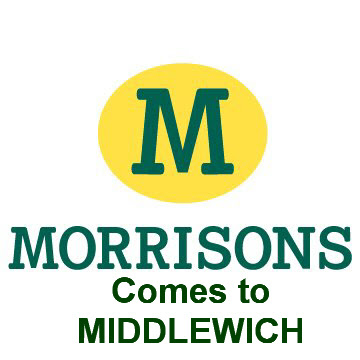 A PHOTO FEATURE BY BILL ARMSDEN
with commentary by Dave Roberts

The opening of a new supermarket in other towns is usually a matter of fleeting interest to most people. A few lines and a display ad or two in the local newspaper  and a leaflet drop to let everyone  know the new store is in business are usually the only indication of a new addition to the local shopping scene.
This, it hardly needs to be said, is not the case in Middlewich where anything new on the (metaphorical) High Street, and in particular anything which adds to local choice is welcomed with great enthusiasm (leavened, of course, with the usual moans and complaints).
Middlewich's shopping woes date back to the late 1960s when towns all around had caught the Supermarket bug with a vengeance. Crewe, Northwich and Winsford (though not, oddly, Sandbach) all climbed aboard the supermarket bandwagon and the shopping pattern for the next forty or fifty years was established.
For Middlewich this meant travelling to a nearby town to do a weekly, or monthly, 'big shop' and picking up a limited number of other items in our town's smaller shops.
The nearest thing that Middlewich could boast to a 'supermarket' until Somerfields came on the scene was the 'Co-operative Superstore' in the town centre which replaced several shops around the town owned by the Winsford Co-op. Part of this enormous building is now a Tesco Express store.
It's important to remember that one of the main problems which Middlewich has faced over the years has been  relatively low population growth compared with other towns in the area. The 'magic figure' of 15,000 which has been quoted as the trigger-point for major chain stores and High Street retailers to look at establishing themselves here has still not been reached, despite all the house building which has gone on in recent years, so things have remained static, save for the take-over of the Somerfields store by Tesco and the building of the cut-price Lidl store on Chester Road.
The predicted 'Store Wars' which were supposed to have erupted when Morrisons built their store fizzled out in the very week of the new store's opening, with Tesco announcing that it would not, after all, be building a massive store in the centre of town - a store which, for once, would have merited that often misused 'superstore' tag.
So is it any wonder that when Monday 28th January came along all eyes were on the gleaming new Morrisons supermarket in Newton Bank/Chester Road which would herald the dawn of a new era for shopping in Middlewich? 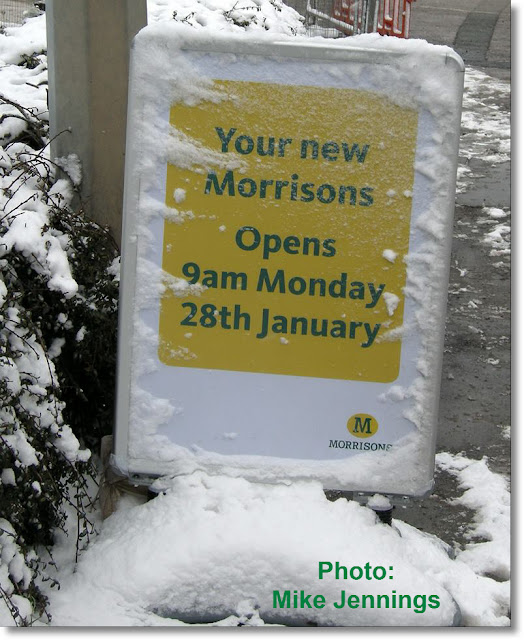 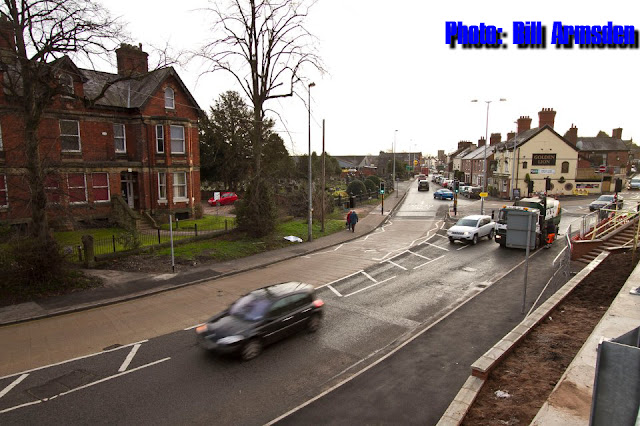 A NEW DAWN - Chester Road on the morning of January 28th. The finishing touches are being applied to the new road layout, designed to keep through traffic heading for St Michael's Way and Nantwich Road well away from the supermarket traffic. Rather surprisingly the entrance and exit to Morrisons are both exactly where the old Boosey's entrance and exit were, Cheshire East Council having decided that an exit on Chester Road, (behind the camera in this shot) would have been too close to the mini-roundabout at the end of Croxton Lane for safety. On the right of the picture it can be seen that the retaining wall for the supermarket car park is also not quite finished. There's a pleasing Victorian feel to this end of Middlewich with the gothic bulk of 'The Limes' on the left and the cemetery behind  it. To the right is the Golden Lion with the little alleys and cottages of Newton Bank and Newton Heath beyond. 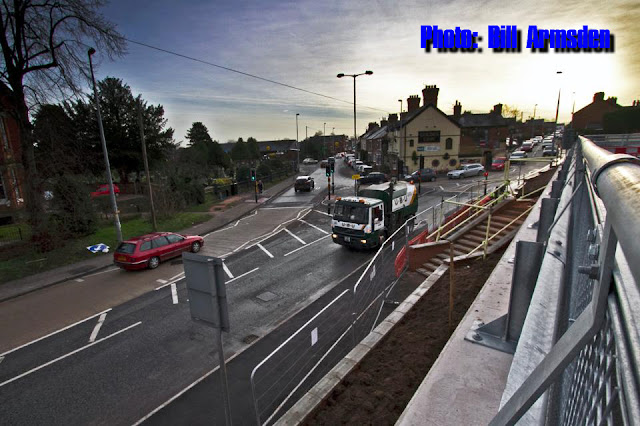 ALMOST THERE: The retaining walls for the car-park, decorated with Middlewich Town Council's 'Roman Middlewich' design are almost complete. The stairways from Chester Road would not be open to the public until a week or so after the opening day. Middlewich Autos, and before it Middlewich Motors, occupied this part of the site for many years. 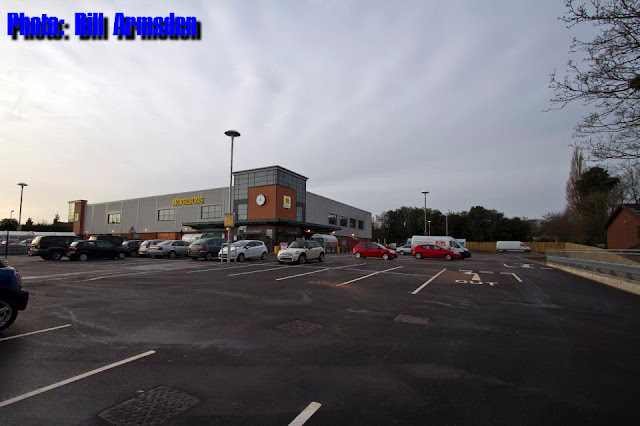 GETTING READY: The car-park starts to fill up as people arrive for the store opening 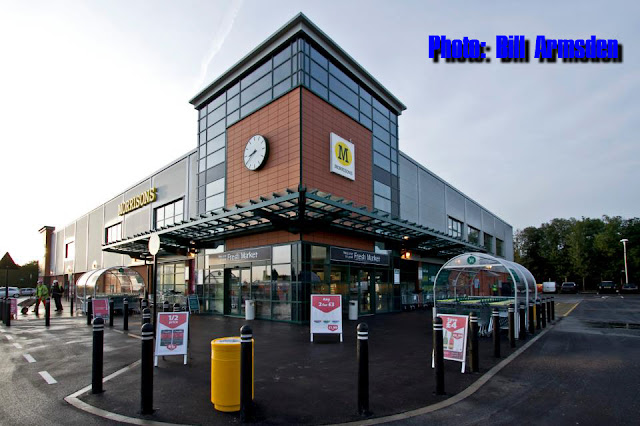 STANDING BY: Twenty minutes to go by Morrisons new clock, one of only two public clocks in Middlewich (the other, of course, being the church clock), although Boosey's Garden Centre did boast a rather attractive turret clock in its later years. Not immediately apparent from this photo is that the new Morrisons clock is actually in corporate colours of green and yellow on a white background. 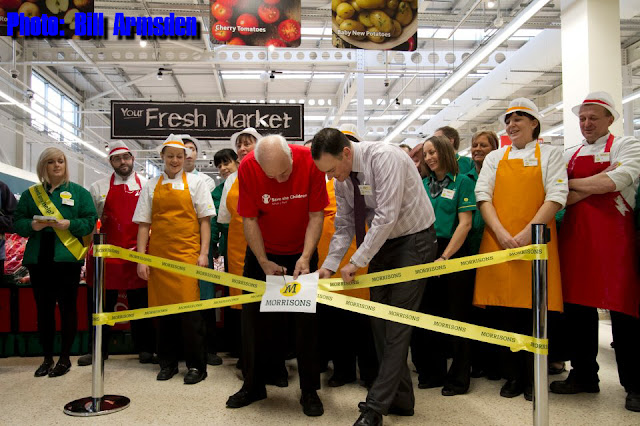 NEARLY THERE:  It's nine o'clock and Store Manager Andrew Whelan (right) and John Roberts of Save The Children prepare to cut the tape which will mean that Morrisons Middlewich is officially open. 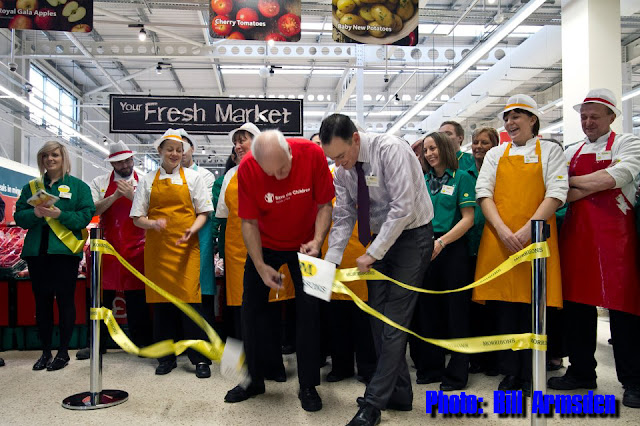 WE'RE OPEN! And a new era for Middlewich shopping has started. 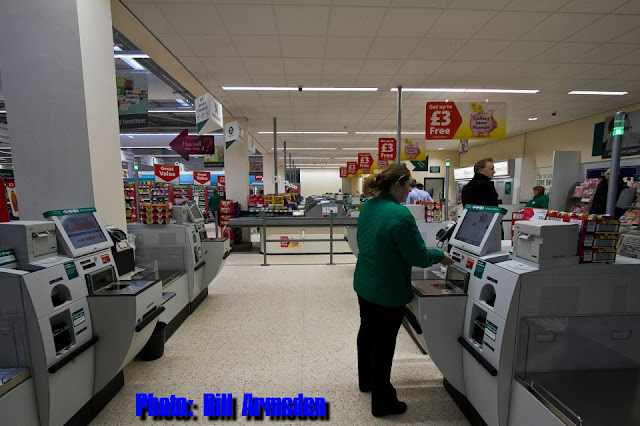 CHECK OUT: The self-op tills which are a feature of all modern supermarkets 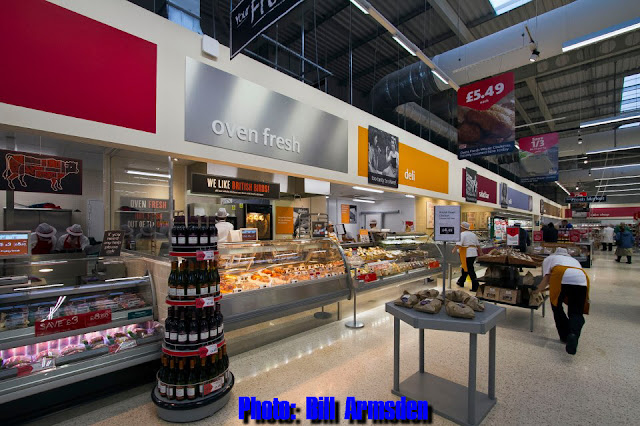 SPACIOUS: Morrisons Middlewich is a 'Morrisons Local' store and smaller than the company's main stores such as Winsford, but has been designed to give an impression of space. 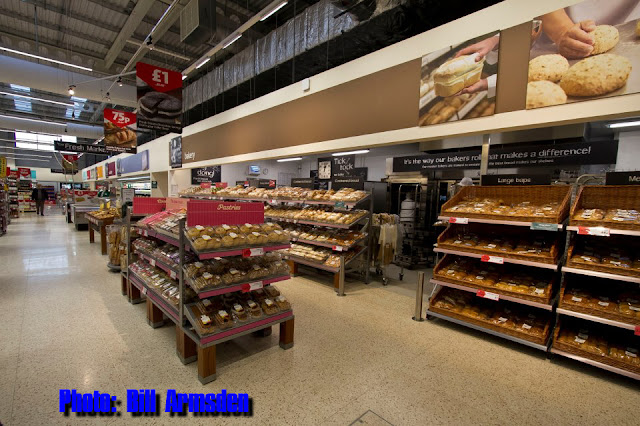 CHOICE: The opening of the Morrisons store brings a far greater choice of goods to the town for the very first time 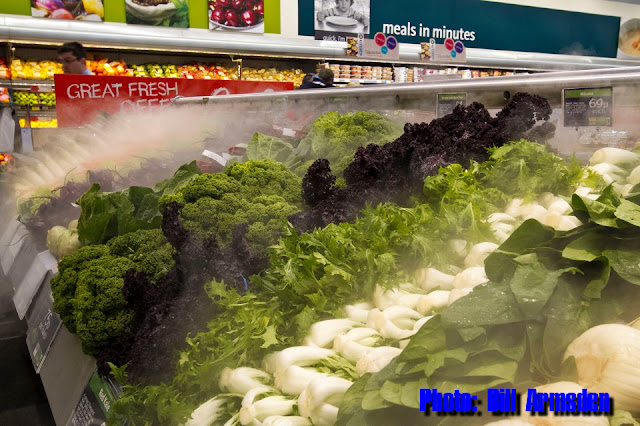 FRESH: Morrisons' innovative 'misting' technology ensures that vegetables are moist and fresh looking at all times. 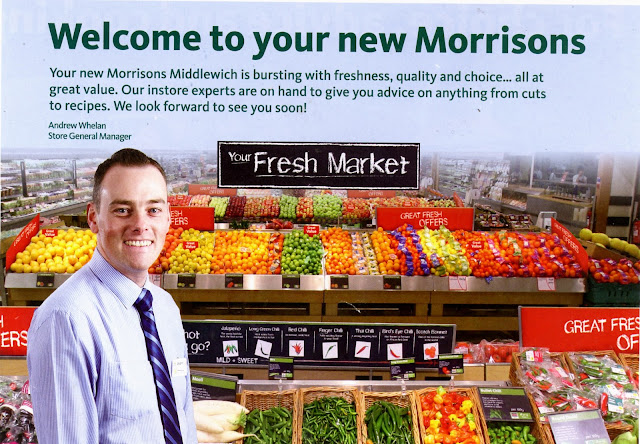 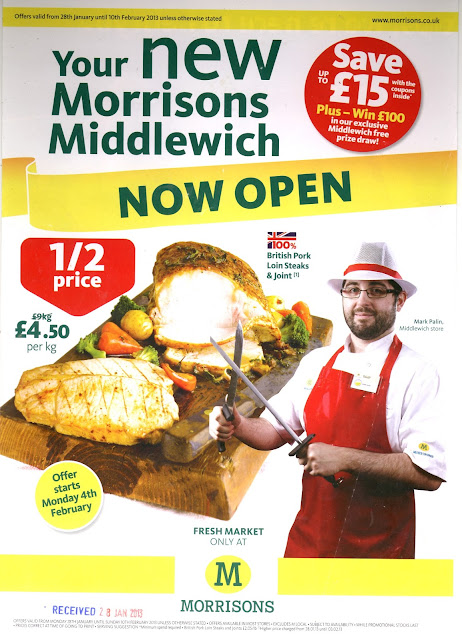 NOW OPEN: MORE MORRISONS PUBLICITY FOR THE LAUNCH OF THE NEW STORE

So there we are - Morrisons comes to Middlewich. Will it herald a new dawn for Middlewich shopping?
Will future historians be able to pinpoint the start of our  renaissance as a shopping town at  9am on the 28th January 2013?
You may have gathered that we're unequivocally and unashamedly in favour of this new development.
Tesco's abandonment of its plans for a giant store in the town centre has given us  an opportunity to develop the town in a much more attractive and positive way and the refurbishment of the existing Tesco store will mean that we have three medium-size supermarkets each catering for slightly different sections of the community, within a short distance of each other, something which not many towns of this size can boast.
For the first time in many years it is now possible to do that weekly or monthly 'big shop' entirely in Middlewich, and that can be no bad thing.

Geraldine Williams We paid a State Visit to the new Morrisons last time we were in Middlewich and were suitably impressed. The layout is very clever - and we're Morrisons (Crewe) devotees!