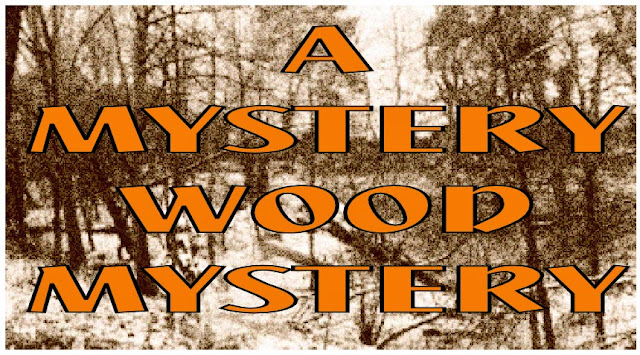 Now that the nights are drawing in, and Christmas looms on the horizon, the season for  stories of weird experiences and inexplicable happenings is upon us.
Like every town in this ancient and haunted kingdom, Middlewich has its share of spooky places.
Hannah's Walk, for instance, on a frosty, foggy December afternoon when dusk is approaching can play fearful tricks on an over-excited imagination, and it's easy to let your mind wander and perhaps fancy you can just glimpse, out of the corner of your eye, the shade of poor Hannah rushing to her doom in the icy waters of the canal.
We've already mentioned Mill Lane and that restless and uneasy place where the little stone bridge passes over the old mill weir and an awful feeling of being watched can steal over one on the brightest of afternoons. Go there on a cold November day, with the frost on the ground and the first dustings of snow in the air, and the oppressive feeling that you're not alone is almost overwhelming.
What malevolent force is lurking there in the deep and ceaselessly churning waters under your feet, waiting to drag you to your doom?
Not too far away, down Nantwich Road (or, if you prefer, down the River Wheelock and a short distance away from the aqueduct, the 'twin' of the one that takes Nantwich Road under the SUC Middlewich Branch) is 'Mystery Wood', between Nantwich Road and the old road to Middlewich Manor, and the new housing estates in what were once the Manor grounds.
It's the haunt of dog walkers and strollers, and children playing among its trees and pathways.
But does Mystery Wood also hold an ancient secret which might account for the strange experience which Malcolm Hough had there more than fifty years ago?
-Dave Roberts, Editor.


I was 13 years old, and it was late July or early August, and it was just about dusk.
Myself and three friends were playing in the woods next to the main Nantwich road in Middlewich, by the aqueduct that carries the Union Canal over it.
The wood's local name is “Mystery Wood”
I knew adults who would not go in there after dark.
It was a long narrow wood with spooky iron railings at each end, and with a stream running through it. That particular night it was still and very quiet, and we were joking about it being a spooky atmosphere, when all of a sudden a Sycamore tree of about  six or seven inches in diameter fell over.
It was a perfectly still summer evening.
We ran the long way home for about a mile or more, and only stopping outside of the British Legion club in Lewin St,  all of us out of breath.
We were scared stiff.
We did not talk about it that night and we went our separate ways home.
I remember, I left the bedroom light on all night.
When we met up the next morning at our pre-arranged time, my friends all talked about the highwayman in a tri-corn hat, that they had seen pointing a gun at us when they turned around to see what was happening.
I saw nothing, as I did not turn around, I just kept running.
It must be remembered that, in those days, we had no telephones, so no way of discussing the matter.
One thing I do know, is that I definitely saw that tree fall, and we were not near it at the time.
The area has now been partly developed, but most of the wood still stands.
It’s now named “Misty Wood” by the developers of the site, so I have been told by someone whose garden backs onto it.
I wonder why?
© Malcolm Hough 2013

Editor's note: Note that Malcolm says that the wood is now named Misty Wood 'by the developers of the site'. We're wondering if this could be an explanation for the fact that some people call it 'Mystery Wood' and some 'Misty Wood'?
Could it possibly be that some publicity person at the development company was casting around for a little bit of local colour to put in the brochure and was told the local name for the woods? Could he have misheard 'Mystery' as 'Misty'? And did the people who bought the houses then start to use the name 'Misty' because of what it said in the brochure? Maybe the developers just thought that 'Misty' somehow sounded better than 'Mystery'. Just a thought.
In any case, to an older generation, this was never 'Mystery Wood' or 'Misty Wood'. It was just 'the woods'. If we called it anything, we called it 'Manor Woods'.

UPDATE 21st April 2020: On the other hand, Chris Jones writes:
I grew up on Rolt Crescent and spent a lot of time playing in mystery/misty woods and on the cow field. I knew it by both names in the late '70s and always presumed it was laziness or slang that shortened mystery to misty.

So that appears to blow our theory out of the water. And yes, shortening 'Mystery' to 'Misty' out of laziness or slang sounds plausible.