by Dave Roberts
Go to any meeting of truck enthusiasts and you'll find stalls selling all kinds of souvenirs of trucks, past and present.
Particular favourites among truck fans are  lapel badges such as the ones shown above, which were the last remnants of a collection I built up during the years I worked at ERF and...er...had occasion to do a little - shall we say - stock checking?
ERF Ltd was founded in 1933 by Edwin Richard Foden, a member of the famous  Foden family of Elworth, manufacturers of industrial and agricultural machinery, notably steam lorries and traction engines.
My mother's side of the family has strong Sandbach connections. They lived in Moston and my Mum went to school in Elworth. My Grandmother, Mary Mason, was 'in service' with the Foden family in her younger days.
When Edwin Richard  was unsuccessful in persuading the Fodens that the future of lorries lay with diesel power, he decided, at the age of 63, to start his own company to manufacture the 'ER Foden Diesel'.
As a shrewd businessman, ER realised that the Foden name still carried a lot of clout even if the company were refusing to move with the times, and had no compunction in sticking the name Foden on the front of his prototype.
After complaints from Fodens Ltd, the name was shortened to ERF Ltd and after first looking at what later became the Steventons/Ideal Standard pottery works in Cledford Lane, Middlewich+, the company established a factory on land in Sandbach where now stands a medical centre, an Aldi Supermarket and a branch of MacDonalds.
The company was a thriving part of the British truck industry until the end of the 20th century, when, after a series of takeovers, it was eventually swallowed up by MAN Trucks and production moved to Germany where it ceased altogether shortly afterwards.
ERF Ltd played a brief, and ultimately inglorious, part in the industrial history of Middlewich.
In 1971 (co-incidentally the year that ERF 1 was restored by apprentices at Sandbach) the company wanted to expand its service and warehousing operations and, as the Sandbach site was full to bursting, looked at a site off Brooks Lane in Middlewich where part of the former ICI Middlewich soda ash plant had stood until a decade previously.
The ERF Service Centre was closed in 2000 as part of a re-organisation which would see the entire company moved to a new, allegedly purpose built, truck 'factory' off Pochin Way.
Before too long the company had, effectively, ceased to exist.
Towards the end of its independent existence ERF made great play of its Britishness, billing itself as the last British Truck Maker.
The slanting lines on the front of the trucks, originally put there by ER Foden to represent sunrays, because of his belief in the health-giving properties of sunlight (hence the name of the Sandbach Factory, 'Sun Works') were adapted into red and white stripes to look like part of a Union Flag and no chance was missed to stress the 'British' motif.
The badges shown in the illustration above (originally created when I sold them on ebay) are from ERF's 'British' era.

Here's a brief description of them

1: This black, white and gold enamelled badge was created for the launch of the ERF 'EC' Series in 1993, the company's Diamond Jubilee year. The 'EC' was the last product produced by the independent ERF Ltd and was designed to attract custom away from DAF, Scania and the rest of them by getting away from the 'gaffer's truck' image and providing something approaching luxury for the truck driver (the EC 'Olympic' was even more luxurious). According to those in the know at ERF the 'EC' didn't stand for anything in particular (it followed on from the 'E' series, which followed on from - you guessed it - the 'C' series. There was never a 'D'series.) but was 'supposed to remind people of Europe'. Rather than Sandbach, probably.

2: This bronze badge was also created in 1993 for the company's 60th anniversary and shows 'ERF 1' alongside a new EC Series vehicle. Although the trucks, understandably, look rather different, according to Peter Foden, the company's MD, there was a 'family resemblance' which meant anyone could tell one of the company's trucks 'at a glance'. Maybe so, but I always thought the letters ERF on the front were the real giveaway.

3: The spectacular (and rare) 'ERF Professional Drivers Club' badge, always referred to by us, for obvious reasons, as 'sheriff's badges' were presumably designed to make ERF drivers feel like the undoubted stars they were (and are, of course).

4: Plugging the 'British connection' for all its worth, this 'Union Jack' badge couldn't possibly put it any more clearly.

In the centre is one of what seemed like hundreds of millions of button badges we had in stock. We gave them away by the handful, but the stock never seemed to diminish. 'Sunpar' was a contraction of 'Sun Parts', named after the Sun Works (one of the least sunny places in the world, in actual fact) and was the trade name for the Middlewich parts operation*. 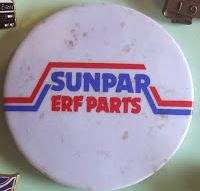 You can find out more about ERF Service, Middlewich, here

* ERF's use of 'Sunpar' as a trade name gave rise to an urban legend. Someone told me that Fodens, who always kept a jaundiced and resentful eye on what was happening 'down the road', were considering calling their own parts operation 'Fo-par' in similar style. Until, that is, someone realised what it would sound like.
I've no idea whether or not it's true, but I hope so.

+ Many years later to become the site of ANSA's controversial waste recycling site.