A CHRISTMAS TO REMEMBER (ARCHIVED)

ARCHIVED
A MEMORY OF CHRISTMAS 2014 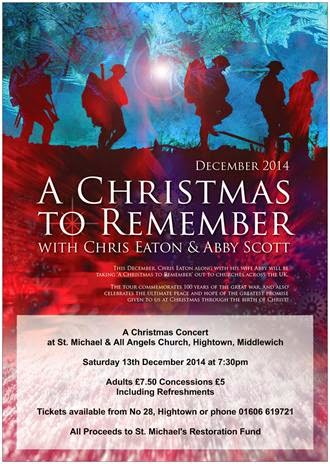 A Christmas to Remember

On Saturday 13th December, Chris Eaton and Abby Scott will be in concert at St. Michael and All Angels Church, Middlewich at 7:30pm.  The Middlewich Festival Choir, based at St. Michael’s, will also be taking part.
The evening will be a very special concert which will commemorate 100 years of the Great War and also celebrate the ultimate Peace and Hope of the Greatest Promise given to us at Christmas through the birth of Christ.
Chris Eaton is a contemporary Christian singer-songwriter who has recorded his own albums and also written songs for numerous artists: he wrote “Saviour’s Day” the 1990 Christmas number 1 for Cliff Richard.
Chis has written a new song called ‘1914 , The Carol of Christmas’ and it has been recorded by an ensemble of military voices and soloists. It is to be released as a single to raise money for the Royal Air Force Benevolent Fund, The Royal Navy and Royal Marines Charity, and ABF The Soldier’s Charity.
Chris says: "My hope and prayer is that my song '1914, The Carol of Christmas' will move and inspire all generations as they listen, to remember with honour and respect  those, past and present, engaged in war, and be filled with hope for everlasting peace through the message of Christmas!"
The song will be available for download on iTunes from 15th December with 100% of the profits from the sale of the single going to the three charities.
Tickets for the concert cost £7.50 for adults and £5 for concessions with refreshments included.  All proceeds will be donated to St. Michael’s Restoration Fund.  Tickets are available from the Church Office at No. 28 Hightown or by calling 01606 619721.

(Part of the Great War Centenary commemorations in Middlewich)