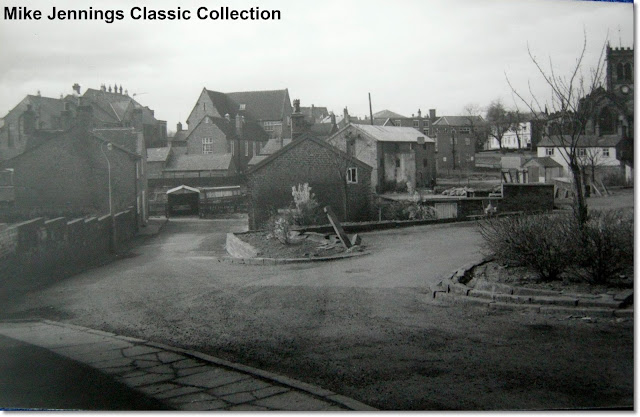 Mike Jennings recently sent us this photograph of Seabank in the 1970s. It's one that we can't recall having seen before, and Mike says he has little or no information on it, or where it came from.
We think, however, that we can date it to around 1975, by reference to the colour slide below, taken by Jack Stanier in 1975 and often referred to here on the Middlewich Diary. In the background, beyond the River Croco and the Trent & Mersey Canal can be seen those large  buildings in Lewin Street  which we have seen so often in our Middlewich Diary travels - on the extreme left the Wesleyan Methodist Church and, centre left, the C of E Infants School. The buildings to the right around the town wharf still exist, waiting, like so much of our town, for better days, and beyond them can be seen the buildings on Hightown adjacent to the churchyard, including the white-painted Kings Arms Hotel at the bottom of Queen Street (not to be confused with the Wharf cottage, also white-washed, next to the Town Bridge). 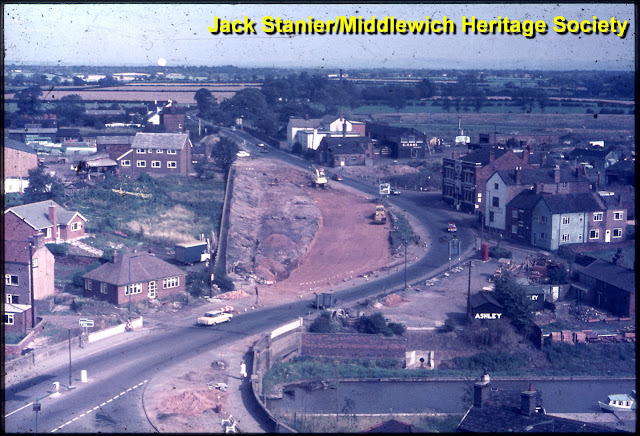 And when we  compare Mike's photo with this old Middlewich Diary favourite, we can get a few clues as to the date of the Seabank photo. Look, in particular, at the shrubbery next to the old red GPO phonebox. Doesn't that look like the shrubbery to the right of Mike's photo? The Seabank car park at that time was being used  as a base for Ashley's contractors, who were re-shaping Kinderton Street to provide better facilities for traffic to and from the M6 (and, eventually, via the Town bridge, to St Michael's Way). The long-demolished cottages on the right hand side of Seabank, seen in Mike's photo, can also be seen on the extreme right of Jack's photo.

Posted by SALT TOWN PRODUCTIONS at Saturday, May 06, 2017