LEWIN STREET 1972 FROM THE CHURCH TOWER 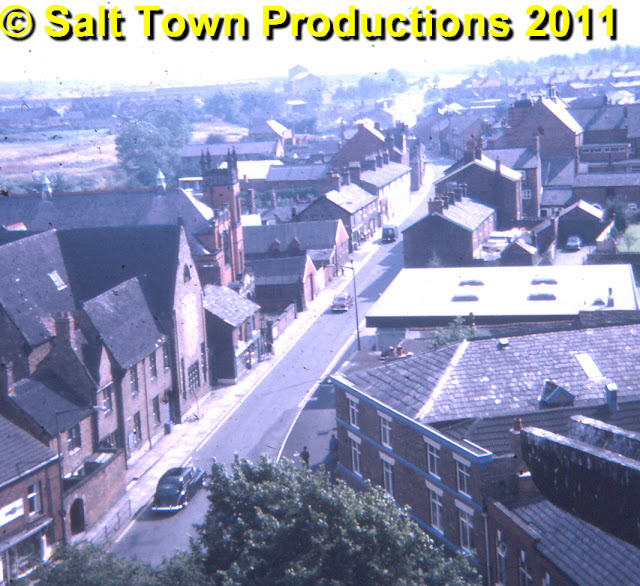 Here’s a shot  taken from the Church Tower during one of its periodic open days, this time in 1972, revealing a long-vanished but still vividly remembered version of Lewin Street. These open days were always hugely popular, with people clamouring to take otherwise unobtainable 'aerial views' of the town.
As far as I can recall the last of these trips up the tower took place in the 1990s, during the early years of the Folk & Boat Festival. Quite possibly Health & Safety concerns have put paid to them (there was always an awkward little jump to be made to actually get onto the roof itself, and this might have something to do with it).
It's a pity, because it would be wonderful to be able to take some modern-day pictures of these streets, with the vastly improved equipment we have today, for comparison.
I wonder if there is any way these  open days could be revived?
The buildings on the left-hand side of the street, and heading in the direction of Sandbach are:
Gibbins Shop (extreme left) - this shop later became the premises of J&M Print and even later (2014) the premises of Peter Forshaw, Funeral Director.
Next comes the CofE Infants School, Square One, the Wesleyan Methodist Chapel and Seddon's Workshops. All these buildings, together with the Wych House Lane Seddon's Salt Works behind them, were replaced in the 1990s by Salinae and its grounds. Beyond that is the still extant Middlewich DIY.
On the right, the building with the square white roof is the then new Middlewich Library.
Above that is a small row of cottages with Yearsley's Menswear Shop (formerly Fred Dodd's) at the top
(now replaced by Longcross Court) and then the Crown (now the 'Narrowboat')
Further on still is what is now Middlewich Post Office and then the huge bulk of
the Victoria Building with the Civic Hall attached. These buildings have now, quite rightly, been re-christened 'Middlewich Town Hall'
Update: From 2016 the former Civic Hall was re-christened the Victoria Hall.
Notice the relative absence of traffic (and the total absence of heavy trucks) in what is now our town's worst traffic blackspot. But, to be fair, appearances are, once again, deceptive. Even in those days heavy industrial trucks were very common in Lewin Street, it being the main route from Sandbach and the industries along Booth Lane to Winsford, Northwich and Merseyside. We seem to have caught the road at a quiet time. Perhaps it was a Sunday...?