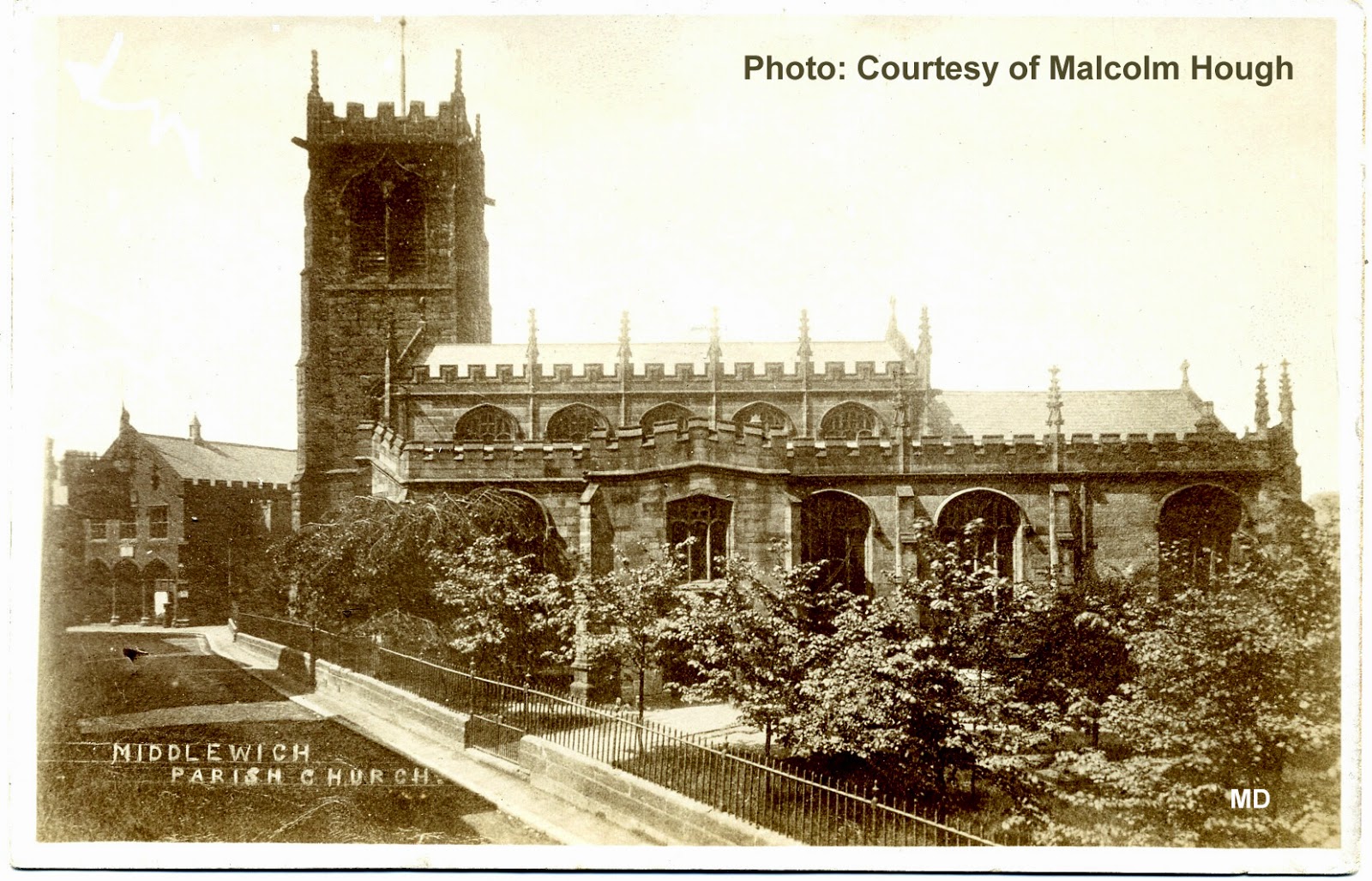 by Malcolm Hough
Here is another post card of the church, which I have not seen before, and bought recently off eBay for £4.50. Worth every penny!
I don’t have a date for it , but it is likely to be the early 1900’s (see below - Ed).
The rear of the postcard  states that the postage cost is a Half-Penny for inland and One Penny for foreign destinations.
There is also a dividing line to separate the address from the communication and I believe this line came into use around 1905, according to a post card collectors site I was looking at a few years ago.
Bottom left you can  see where lines have been drawn, or scratched, to write the Middlewich name on the front of the card before printing.
I remember the very talented sign-writers doing something similar with chalk at Foden’s before the use of transfers.


I'm not exactly sure where the picture was taken from.
To me it does not look like it was taken at ground level. You can just about make out the Kings Arms pub sign; half way down left-hand side and you can also see the gap in the shadow where the entrance to Queen Street is.
The trees are quite small as well.
Editor's Note:
I think Malcolm's estimate of the early 1900s as a date for this postcard is correct. Look at this view which was taken from the end of Lewin Street, looking towards the Church and Town Hall, and we know to date from 1906.

The Church (or what we can see of it) and the old Town Hall to its left appear to look exactly the same in this photo as they do in  Malcolm's postcard, so I think 1906 is about right. Incidentally, on the photo from Allan Earl's book you can just see, behind the cluster of buildings around the churchyard, the top of one of the chimneys at the Pepper Street salt works belching out black smoke.

Returning, briefly, to Malcolm's postcard, it's also interesting to note that the entrance into the Churchyard seems to be a lot further away from the church than it is at present. Is this a trick of perspective? Or were there two entrances in this section of wall in those days? just below the Town Hall you can see what might be the present day entrance (these days minus its gate) in the form of a distinct 'V' shape in the wall. You'll also notice that the arrangement of the churchyard itself is also a lot different. Of course,we know that the current layout, with its pathways made from old headstones and gravestones only dates back to the early 1970s.
But take a close look at the Town Hall in both pictures. Here's an enlargement of part of Malcolm's postcard. 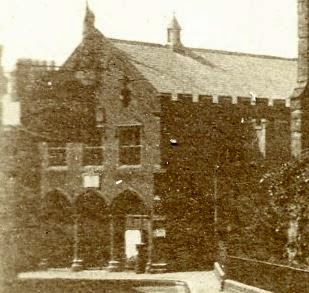 It's the old Town Hall all right - the one which was demolished in the early 1970s and stood on the ground next to the churchyard where the 'Roman Amphitheatre' is now, but it appears to have what's known as a colonnade - a row of pillars at the front of it.
Here's the Town Hall as we remember it... 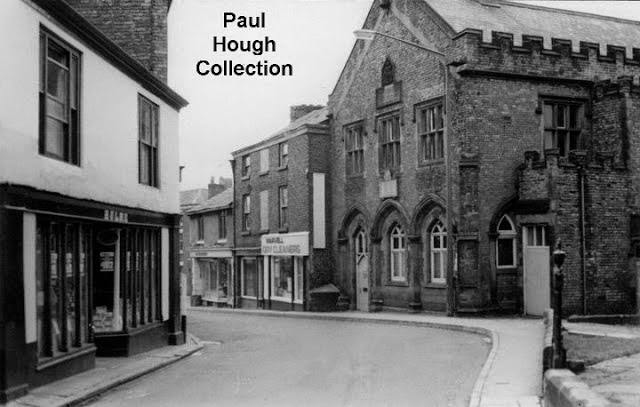 ...and from this we can see that the gaps between those arches appear to have been  filled in at a later date to form a door and two windows. Did this occur, perhaps, in the early 1930s when the rear part of the Hall was demolished for road-widening and the Urban District Council moved its offices to Victoria Building (now, somewhat ironically, itself re-christened 'Middlewich Town Hall'?) It would be interesting to get hold of a clearer picture from the early 20th century of the front of this venerable building to see just what the entrance really looked like before these alterations. - Dave Roberts