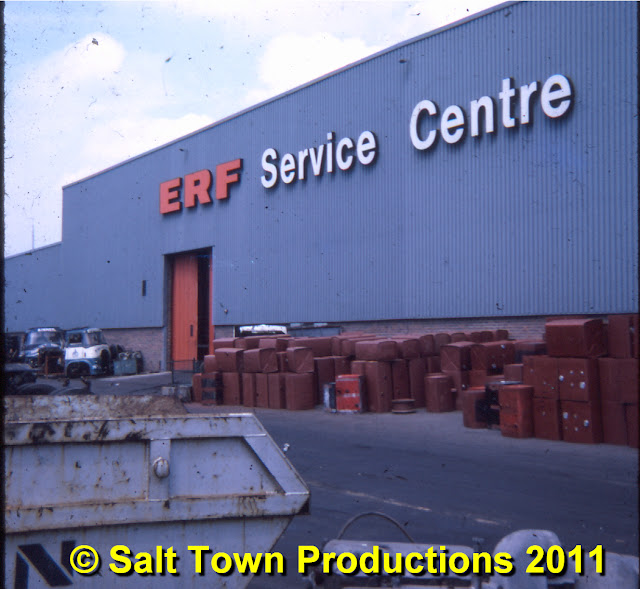 In the year 2000 ERF closed its 'Sun Works' in Sandbach and the Middlewich Service Centre and moved operations to a new 'factory' in ERF Way, off Pochin Way (the truncated 'Middlewich by-pass').

The new building was in no way suitable as a truck factory and it wasn't long before the company's new owners MAN Trucks announced that production of ERF Trucks in Britain was to cease.

Production of ERF Trucks - or, at least, trucks with the ERF badge on them - struggled on for a few more years in Germany but eventually, on 23rd July 2007, MAN announced that ERF was no more.

This photograph was first published on Facebook on 20th May 2011, and the original Facebook feedback is below:

Ian Murfitt (Ian used to live on a canal boat - in fact, on two canal boats - moored very close to the ERF Service Centre's boundary and the Training School near the Kings lock pub.)

Not totally related, but one ERF loss that I mourn is the training centre near the canal. The trees along the canal from the Kings lock car park to the winding hole* were planted by a genius.
Each tree had a different colour leaf and different colour blossom and fruit, and the trees turned  different colours in the Autumn.
I can't imagine that this was just good luck.
I frequently walked down there. The training centre itself became an eyesore and a hang out for local undesirables who went onto the moorings causing damage, so the centre was knocked down. But why most of the trees had to go is beyond me.

*a winding hole is a wide section of canal used for turning boats round.

Dave Roberts Yes, the training centre was in one corner of the site, close to a gate which opened onto the Kings Lock car park. Unfortunately this gate was always locked, thus making a long hike necessary if one wanted a lunch-time pint.
I got myself crossed off the training centre's Christmas card list by  driving a heavy fork-lift truck into the middle of their nice posh lawn and getting it stuck there. We had to get a tractor to retrieve it.
I wasn't ERF's best fork-lift driver. Then again, nor was I the worst, by a long chalk.

Ian MurfittThe fence in that corner was cut and re-attached with bits of wire so workers could crawl through.
Latterly, it grew a sign  which read:

The ground adjacent to the winding hole was once a dry-dock with a cottage beside it. I rented this area for years as a garden. We dug up loads of interesting things as it was the custom to bury rubbish in those days.
Later, it transpired that the ground actually belonged to ERF rather than British Waterways, and it was sold.
The fence was moved towards the canal, and it became a used car lot.

The training school, and the original office block are long gone, but the rest of the ERF Middlewich buildings are still there, re-clad in light grey and looking bland and anonymous.

They appear to be serving the motor industry still

Does anyone know who uses them now?