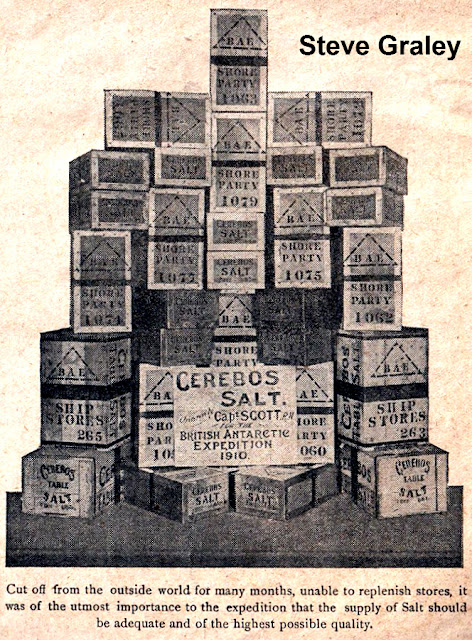 We're grateful to Steve Graley for permission to use this advertisement which he found in a newspaper purchased at a local car boot sale. It's another one of those advertisements extolling the superior qualities of Cerebos Salt which was, apparently, the only salt worthy of being used by members of the British Antarctic Expedition of 1910-1913.
The advertisement comes from the Daily Mirror of May 21st 1913 which also includes the following two advertisements. In the first one, Captain Scott is singing the praises of another great British culinary institution, OXO, which also so impressed Sir Ernest Shackleton that he felt impelled to send a telegram to the manufacturers telling them how much he'd enjoyed OXO on sledge journeys 'and throughout the winter'
There's only one oblique reference to the disastrous end to Captain Scott's expedition, in that the OXO advertisement refers to him as 'The Late Captain Scott'.
Neither Captain Scott nor Sir Ernest seemed to have any use for 'Glosso, the one-minute metal polish' made by Hargreaves, Bros. & Co. Ltd, 'The Gipsy Black Lead People'. Perhaps Glosso missed an opportunity here by not doing a deal, because something might have been made of the fact that, like Scott and Shackleton, 'Glosso Stops At Nothing...'


For Captain Scott and his colleagues the expedition ended in disaster. They reached the South Pole on the 17th January 1912 only to find that Roald Amundsen had got there thirty-four days earlier. They all perished on their way back to their ship, the Terra Nova, and their fate wasn't known until a search party found their bodies eight months later.

P.S. We're well aware that we're cheating a bit by including this in our 'Middlewich Diary'. The shameful truth is that Captain Scott's supply of salt wouldn't have come from here at all, but from Greatham, the original home of Cerebos. The brand only came to Middlewich much later. But we think the long association of the Cerebos name with Middlewich is enough to warrant the inclusion of this diary entry. What's even more shameful is that in 2017 the Cerebos brand is, by all accounts, owned by the Japanese! -Ed.