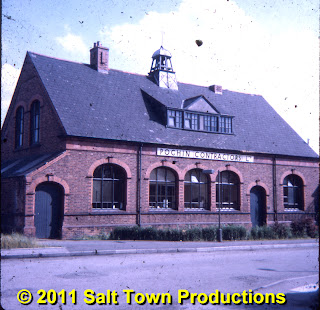 We're in Brooks Lane in 1973 and here we see the soon-to-be-demolished offices of Pochin (Contractors) Ltd and Contractor's Plant (North West) Ltd. This building was originally the offices of the ICI Middlewich (formerly Brunner-Mond) works and stood on the landscaped area in front of the current Pochin offices. The building is very much in the same style as the Pochin (formerly ICI) Club across the road which still exists today as the Middlewich Community Church. This slide must have been taken very shortly before demolition because I worked for Pochins for two years and served time in the new offices before moving just down the road to ERF in 1974.

On the 5th August 2019 Middlewich heard the news that the Pochin Group had 'collapsed' and was going into liquidation.

Just about the most unbelievable news we've ever had - Ed.

At the start of July 2020 it was announced that a new company, CLD Fencing Services, had taken over the Pochin site, using the 1970s office building as an HQ and demolishing surplus buildings on the site to create additional parking space.

Dave Roberts I think the reality was that the new office block for Pochins was built behind this one before it was demolished. The ICI offices stood where the lawn in front of Pochin's new offices was.  If this was 1973, and I moved to ERF in 1974, there would not have been time for this to be knocked down, and the new block built, before I went.

Geraldine Williams What happened to the Scout Hut that was in that area?

Dave Roberts It's still there, and thriving, in the area to the left of this picture but out of shot.

Geraldine Williams Oh good. We never get down Brooks Lane these days but we had to make many weekly journeys to the Scout Hut in the early 70s!