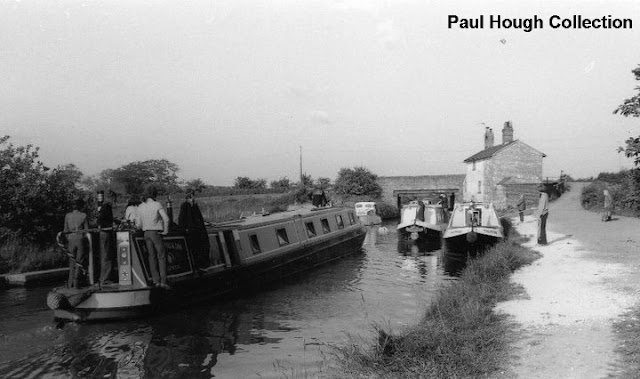 Today we're right on the north-western outskirts of Middlewich in the early-to-mid 1970s.  The bridge over the  Trent & Mersey canal in the background of the photo carries Croxton Lane on its way from Chester Road to King Street and a very utilitarian and nondescript bridge it is, with heavy steel girders in place of the more typical arched construction, making it look more like a railway bridge than anything to do with the canal network.
Quite possibly the bridge has been rebuilt and strengthened in this way at some point, although it is not clear why. Until recent years, when Croxton Lane became yet another 'rat run' traffic was fairly light.
[UPDATE: Actually, a glance at the latest Ordnance Survey maps and road atlases shows us that Croxton Lane, despite the restrictions of the T&M bridge, the narrow Dane Bridge and the railway underbridge (which is prone to flooding) and the less than perfect access at both the Chester Road and King Street ends, Croxton Lane is now  the official A530 road, and the section of King Street from Holmes Chapel Road via Centurion Way to the Ravenscroft Bridge Junction the B road (the B5309). The section of route from Kinderton Street to Ravenscroft Bridge junction seems to be unclassified (according to the latest map we have, at least), possibly because of the weak railway bridge near the King Street Trading Estate.
This will, presumably, all change on that glorious day when Middlewich's Cinderella by-pass (which currently stops dead ignominiously in the middle of a field near the former ERF 'works') is completed?]
So why was this bridge built in this style? Is it the original, or a replacement? It may be that a fault developed with the original bridge, or an accident happened to it and it had to be rebuilt in what would, by that time, have become the railway age, hence the railway-style bridge.
This, however, is just speculation and if anyone knows the true facts of the matter we'd be interested to hear them.

UPDATE: In fact the real answer has been supplied by Andy Roscoe, who knows a thing or two about canals. He's added a comment which reads:


Most of the canal bridges between Croxton Lane and Northwich are built in the same way, the construction allows them to be "Jacked up" and new courses of brick added when subsidence occurs.

The use of the canal for pleasure boat traffic is by now well established, ten years after the end of most of the commercial traffic in the harsh winter of 1962/3.

In an earlier version of this Diary entry we put forward the suggestion that the harsh winter of that year was largely responsible for the end of commercial traffic on most of the network.

David Lowe, in a comment, hastens to correct this:

There is no evidence that most commercial traffic on the T&M (or any other canal) finished after (i.e. because of) the harsh winter of 1962/3, The Clayton's oil traffic from Stanlow had finished in 1955 but the British Waterways southern fleet of its NW Division, based at Anderton, continued to be quite busy and in October 1964 the boats (some very modern), traffics and crews were taken over by Willow Wren Canal Transport services, then, in December 1967 by the Anderton Canal Carrying Company which operated until around 1972. Major blows were the loss of the feldspar traffic from Runcorn/Weston Point to Dolby's in Stoke-on-Trent (due to the closure of the pottery) and coal from Sideway to Middlewich (change from coal to oil) both in 1969.Last regalar traffic was salt from Preston Brook to Runcorn/Weston Point and piles to various locations. I hope that is of interest.
regardsDavid Lowe


Many thanks to David for his comments.
﻿ 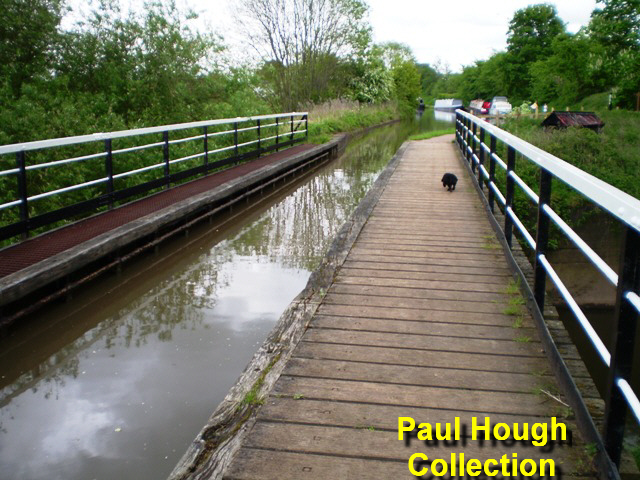 Behind us is the Croxton aqueduct, seen here in a recent photo from Paul Hough's collection.
The original structure, built by James Brindley in 1777, was replaced by another aqueduct at the end of the nineteenth century, as it suffered from brine subsidence.
This second broad structure which still enabled wide boats from the River Weaver to reach Middlewich Wharf  via the equally wide Big Lock (sometimes referred to as 'Middlewich Broad Lock'), was replaced by the current narrow aqueduct following disastrous flooding  around 1935.
Part of the original Brindley aqueduct can be seen on the banks of the Dane.
The site of the old Croxton Flint Mill is just discernible here, and its story, along with that of the aqueduct and its predecessors, is told in the 'Tales of Wych & Water' information board (no. 10) close by.
In fact three rivers meet in the vicinity; the Dane, the Wheelock and the Croco. From here the River Dane flows on for another five miles before joining the Weaver at Northwich close to where the Friendly Floatel and the Regal Cinema once were.
Theoretically, wide boats are still able to reach this point (i.e. the Northwich side of the aqueduct) from the River Weaver via the Anderton lift, but it's doubtful if any of them ever do.
There would be little point anyway, as their only option after getting here would be to go back they way they had come.
This, of course, may change if the marina which is forever being planned for the area ever materialises.
A little further along the canal is the mysterious area where the canal widens out into 'flashes' caused by brine subsidence and where many working boats were sunk in the 1960s by British Waterways who were anxious to get them off their books.
And not too far away from this strange and remote location is Whatcroft where, in 1967, the body of Middlewich solicitor Herbert Wilkinson was found in a shallow grave. The mystery of his murder has never been officially solved. This Middlewich Diary entry tells us more:

To return to our main picture from the 1970s, on the right is the canal cottage which remained empty and abandoned for many years - mostly, it was said, because it lacked a connection to the gas supply.
This never seemed like a convincing reason why the place should be empty for so long.
There are many houses lacking a gas main and it's not usually considered an insurmountable problem.
Whatever the reason, the house had a forlorn look for many years but it is now occupied and a supply of Calor Gas laid on.
Which brings us to the question of why it was built there in the first place.
It's a very narrow building squeezed in between the canal towpath and the roadway which runs along the towpath to the council rubbish tip.
So why not build it in a more convenient place?
Quite possibly it was home to one of the lengsthmen who carried out routine maintenance on this section of the canal and so needed to be as close to the canal as possible..

The cottage on Croxton lane, at the entrance to the tip, was occupied for many years by Rupert Washington-  a relative of Sid Washington who started Sids Cars.
As a kid I played at the cottage with Sid's  youngest son Stephen. We built bikes from bits collected from the tip and sold them to Howe`s Second Hand Shop on Lewin Street.