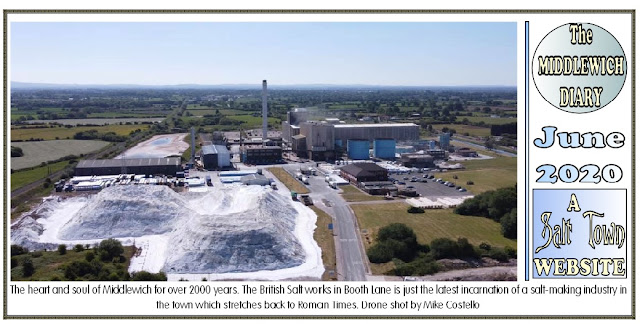 The Middlewich Diary masthead for June 2020 gives us a birds eye view of the British Salt Works in Booth Lane Middlewich, which celebrated its fiftieth anniversary in 2019.


The photo, by Mike Costello, is one of a seried of drone shots and videos of Middlewich taken during the coronavirus pandemic in 2020. It is reproduced here with his permission.

Although the works has been in operation since 1969, this area has long been part of our town's salt-making heritage. There were once salt works on the land to the north of British Salt (behind the camera in this shot), one of them itself called 'British Salt', and the remains of these works can be found among the scrubland between the present British Salt and what is now ANSA's Waste Recycling Facility on the former site, over the years, of Ideal Standard, Steventon's and the Electro-Bleach Company.

Beyond the works, heading in the direction of Sandbach, was, until just a few years ago, the premises of RHM Foods Ltd, once Cerebos and the Middlewich Salt Company. RHM itself, of course, also bore several different names over the years - so many that, as we've remarked before, it could be difficult to keep up with the various changes.

In the left foreground is Middlewich's famous 'Salt Mountain' which came into its own a few years ago during a desperately cold winter when trucks from all parts of the country came here to obtain supplies for keeping Britain's roads clear of ice.

Our late town clerk, Jonathan Williams, memorably described the situation as, 'Middlewich to the rescue...' as supplies from other sources began to run out.

You can tell from the photo how British Salt is situated in a very strategic position in a vital transport corridor. To the left of the picture is the Sandbach, Middlewich and Northwich Railway, still very much open for business for freight traffic and awaiting those passenger trains to come. To the right of the works are, side by side, the Trent & Mersey Canal and the main Sandbach-Middlewich road.

The brine for Middlewich's salt now comes from Warmingham, a couple of miles away to the right (and out of shot).

The sytem used now is known as 'controlled brine pumping'.

Warmingham itself bears the scars of the old system of 'Wild' brine pumping which ended in 1977 and is evidenced by the presence of 'flashes' - lakes created by the sinking of the ground as it collapsed due to the extraction of the salt water. The country lanes around the area are also testament to this practice, with some of them more closely resembling switchback rides than roads.

British Salt's current boilers have served it well for over fifty years but are now coming to the end of their useful lives.
The company is currently in the middle of  a modernisation programme and new boilers are being installed.

The new boiler-house is the 'two-tone' building, middle left. To the left of that can just be made out the flue-stack for the brand-new boilers which will, eventually, replace the current one seen smack in the middle of the photo.

The improvement in boiler technology means that the new stack only needs to be a matter of 30 metres tall, compared to the present one which is over twice the height at 67 metres.

When the current flue-stack disappears, Middlewich will lose one of its landmarks and the British Salt Works will be keeping itself even more to itself than it does now.

Way out in the distance are the hills of Cheshire and Derbyshire in the Peak District. 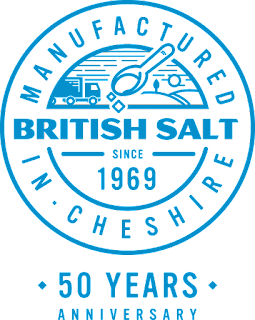