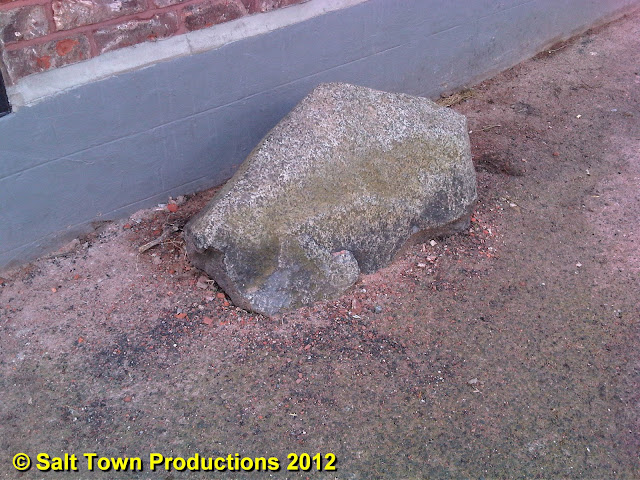 When we looked at this subject in February after receiving several photos of the town's other 'guard stones' from Mike Jennings, quite a few people pointed out that there was another one  at the end of the alleyway which runs between Lewin Street, opposite Dave Costello's angling supplies shop, and Bembridge Drive.
Here's that stone, as seen in March 2012.
Its position is a bit of an enigma. Normally guard stones were positioned at the corners of buildings but this one is alongside the end wall of a row of terraced houses. Quite possibly it has been moved over the years - the option of taking it away altogether being ignored either because it would have been too much trouble or, we'd prefer to think, because someone was aware of its history and decided to leave it at least close to where it started out.
But what was there down that little entry which generated so much horse-drawn traffic coming and going that it merited a guard stone to protect the wall?
Another enigma, that of why the alleyway itself has never been given a name, seems to be answered by our other photograph, taken at the same time. 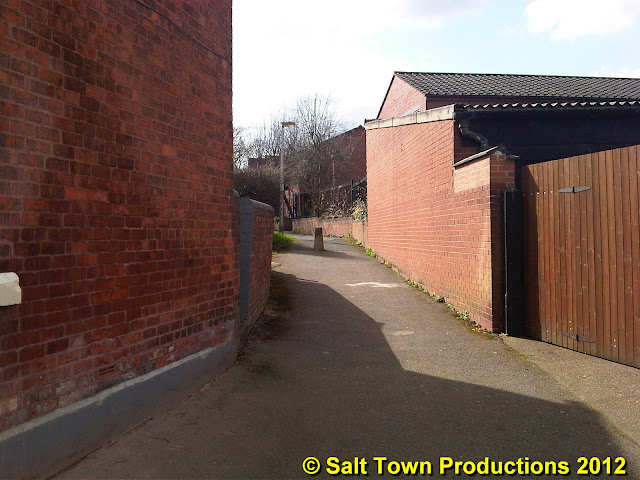 It can be seen that there is nothing in this section of the passageway which could justify it being given a name or a postal address. The gate to the right leads to the rear of premises on Lewin Street and the pathway leading off to the left (next to the bollard) also gives access to houses with addresses in  Lewin Street.
Everything above that bollard can be considered as being in Bembridge Drive.
The guard stone we're talking about, by the way, is just out of shot to the left.

UPDATE: After publishing this Diary entry we received a lengthy comment from Cliff Astles which is so interesting we thought we'd incorporate it into the main text of this entry so that no one will miss it:

The stone in question has always been at the same spot since at least the early 1950's, and has probably been there from long before that time.It was at number 68 Lewin Street where I then lived, one door away along Lewin Street. The stone is next to number 66 Lewin Street.
Why there ....? My own view is based upon the fact that the Ally Way ( with no name )was in those days NOT an Ally.It was a link from this part of the town ( Lewin Street) to Derbyshires land that was used to grow whole ranges of vegatables and fruit for Middlewich.The land in question was behind Lewin Street, along Sutton Lane to the canal bridge, along the canal to meet with St Annes Road, where the land then went all the way to Derbyshires Old Cottage (I delivered papers to hear via the back door :). Between the cottage and about half way to the St Annes Road / Canal Bridge was Derbyshires wooden work sheds that housed both the work horses and the farming tools for the fields etc.My great Uncle John used to look after the horses and work the fields with them when I was a boy. Half the land was used for fruit (many knds of apples / pears etc) and the other half was used for vegetables.

Getting back to the pathway from Lewin Street to the land. The gateway ( 5 bared gate in wood, near to where you can now see the hedge) would have been extensively used to both access the land to take away goods by horse and trailer, and also for access to place the "soil" from the outside toilets in much use in Middlewich in those days, on the land the make it grow food stuffs quite well :(.Therefore, I think the stone was placed there very early in the life of Middlewich to ensure that number 66 Lewin Street was not subject to the cart wheels hitting the walls of the house.

Additionally, the other side of the Ally, now used as an accountancy shop on Lewin Street was a traditional butcher shop ( DRIVERS ?)and behind the shop where some out-house now stand, was the shops Slaughter House. ( Cows / Pigs etc) and I was always awakened on a Sunday morning by the sound of the sloughtermans gun, with the noise from the animals awaiting their turn :(.Well before big the British Legion was built, at the time of their first Army Hut, there were some very old houses behind the current building that formed part of an old farm ( whose ?). We used to play in these, the Old Farm Buildings and the land around. This is where the back of the British legion Club now stands, and where the bolwing green is is where we used to play and DRIVERS the butchers used to bury ( most of the time )all of the old animal bones that were left after they were stripped of their meat.

The land behind the 5 bar gate and Ally was used to allow for the horses to stay ( after they had finished their useful work). It was hear that we used to get the horses to come to the gate for fresh grass, and whilst they were eating this we would jump from the gate posts onto the hoses backs and get a ride up the fields at full gallop. Those were the days :)

The ALLY was probably never given a name as it was NOT an Ally, it was the entrance to the farm that was at the rear of the British legion Club, plus access to Derbyshires land.

Hope this gives you some new info and stimulates thoughts for more.

Many thanks to Cliff for that. In fact we did touch on the subject of that un-named 'alleyway' in this entry about Lewin Street in the 1950s, surmising (rightly, it seems) that it was probably a former entrance to Derbyshire's land.- Ed