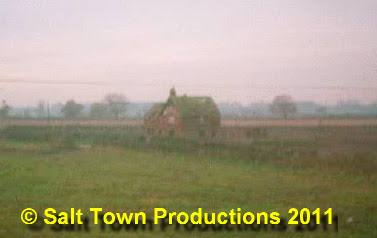 ORIGINALLY PUBLISHED 16th September 2011 UPDATED 10th MARCH 2013 (see below)
This picture has, I realise, something of the quality of an old watercolour painting but that's because of the circumstances under which in was taken. It's a very rare photograph indeed, in that it was taken from the window of a train travelling from Middlewich to Northwich on the 26th November 1999. It was a rainy day and the rain and the speed of the train, plus the less-than-sparklingly-clean carriage window have given it a smeary quality which, I think, is quite nice.
(The whole series of photos showing the train journey from Crewe to Chester via Sandbach, Middlewich and Northwich will appear here at a future date).
The subject of the photo is something which was mentioned to me a while ago by Liz McGuinness of The Boar's Head. It's that derelict house close to the railway bridge in Croxton Lane which has intrigued and tantalized people for years.
Many people have enquired about it, with a view to, perhaps, buying it and turning it back into a desirable residence but their enquiries have always ended in  failure.
What is the truth behind this derelict house? Some say that it is owned by ICI (or whatever the current name of the company is) and they have always vetoed any attempt to rehabilitate it for mysterious 'commercial reasons'.
And, of course, some say it has a dark and disturbing past, but that's more M.R. James than Middlewich Diary territory.
One gruesome tale about the house I can confirm: When my brother Glynn was a serving police officer in this area, in the 1970s, he went there to investigate a report of a suicide, and found the body of some poor unfortunate hanging from the rafters.
In 2011 the house is still there but, it goes without saying, in an even greater state of dereliction. It is now probably beyond saving.
Does anyone know the history of this haunting ruin? No doubt the actual truth is very mundane and probably very boring. But it would be interesting to hear it.


This story from a 2009 edition of the Middlewich Guardian  sheds a lot of light on the mystery: