AN AWKWARD TURN TO THE LOMPON

A what? Middlewichians (or 'Middlewichers', which seems to be the favoured current term) of long-standing might just understand why I have used this particular title for this posting. It's another one of those familiar postcards of old Middlewich scenes we all grew up with and 'An Awkward Turn To The Lompon' was the title/description hand-written on the original negative, although it's missing from  this particular print, which we’ve borrowed from the invaluable Paul Hough Collection.
So what does it mean?
I always, without really thinking it through, had a vague idea that it might, in some way, be a corruption of 'lump pan' but this, of course, is a dead end. The nearest lump pans were some distance away in  or .
But the word 'lompon' does have a kind of authentic Cheshire dialect ring to it, so I consulted A Glossary Of Words Used In the County Of Chester  published by Robert Holland of Frodsham in 1885 and found this:

LOMPOND (or, as it should probably be spelt, LOM POND) - the pond in a farm yard into which all refuse runs.
There is a place at the junction of two brooks,the Allum and the Croco at Kinuerton (sic -ed)called Lompon - The Cheshire Sheaf (The Cheshire Sheaf was a regular column featured in the Chester Courant newspaper)

So 'Lompon' was, or could have been, a  word for a kind of muck hole or cesspit. But how does this fit in with the picture above, which has teased and tantalised many of us for years? According to Brian Curzon  in Images of England - Middlewich (Tempus Publishing 2005)the large building in the centre of the photograph is  the Navigation Inn, which was one of those split level pubs with entrances at street level and canal level, and stood immediately next to the old Town Bridge, and the motorcycle and sidecar are turning from Mill Lane (where Town Bridge Motors now is) to take an immediate left turn onto the bridge.
But, if Brian Curzon is right, here's the enigma: when you turn out of today onto , you turn right, not left.
If we take the picture and flip it horizontally it makes more sense. 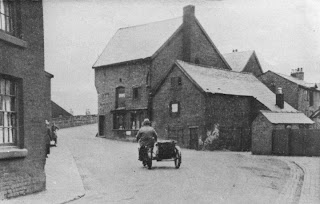 In this case  would come in from behind the camera and in front of  the buildings on the extreme left of the picture. Mill Lane should have joined Kinderton Street to the right of this shot, but there doesn't seem to be a gap in the pavement to allow for this. It all seems a bit tenuous and unlikely.
And, in any case, could a picture like this have been published 'back to front' for so many years without anyone noticing?
(In any case, John Capper has pointed out that, in the reversed version, the sidecar is on the wrong side for the , which is 'not out of the question, but unlikely'.)
It just doesn't seem to ring true, whichever way you look at it (to coin a phrase). The road in the foreground is much more likely to be  itself,  but, if we take that to be true the picture remains a bit of an puzzle.
Perhaps the building on the left (of the top picture) wasn't the Navigation Inn at all. Perhaps the hostelry in question is, in fact, out of sight behind the building on the right? This would make the road in the foreground  all right, but what, then, were all those buildings to the left?
Are they the buildings seen on the right of this picture? 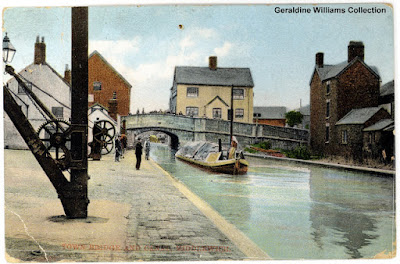 They don't look like them.
Now we can begin to see why this particular postcard has always puzzled people. We all know what it depicts, or is supposed to depict but, somehow, the pieces won't fall into place properly. We have a nagging feeling that, somehow, in some way, the picture is 'the wrong way round'.
To simplify our dilemma: I've looked at this old postcard thousands of times as a straightforward picture of a motorbike and sidecar travelling down Kinderton Street on its way to pass over the old town bridge. Why, then, is it turning left?
The answer has to be that the alignment of was drastically altered when the new bridge was built and that was a lot more demolition than I'd thought. (Another red herring, with hindsight, when you know the real solution to the mystery -Ed).
But just where was the ‘Lompon' anyway? It must have been a familiar local name, to have been thought worthy of a mention on a postcard. But why would a cesspit be a local landmark? Then again, this is Middlewich...
Was it a reference to the River Croco itself which, as we've discussed before, seems to have been used as a drainage culvert for most of its long history?
On the other hand, the name Lompon, as used here, may have nothing whatsoever to do with cesspits and drainage, and might have another source altogether.
And what about the other brook, the Allum, which is supposed to join the Croco somewhere near here?
Well, actually I have a theory about that which will have to wait for another day.
Incidentally, non-Middlewichers may like to note that the word 'awkward' in our title should be pronounced 'ockud'.

Cliff Astles says: Sure this one was taken of the old Middlewich Town Bridge over the Trent & Mersey Canal, some time in the early 1900s, The motorbike and sidecar are a giveaway. This would be well before the new
Town Bridge was built (1931-Ed). The corner of the building on the right may even be the Talbot Hotel.


As is usual with this kind of problem, the actual answer is very simple, and was 'there all the time'.

We have indeed been looking at the picture 'the wrong way round' but not in the way we surmised.

The following was originally published as a separate Diary entry. For convenience, we've combined the two entries together.

We're very grateful to Dave Thompson of Middlewich Town Council for sending us an aerial view of Middlewich as it was in 1928. I've seen this aerial view many times, as it hung for a long time  in a corridor in the Boar's Head Hotel in Kinderton Street.

The picture above is a section of that aerial view showing the  Town Bridge area as it was then, and solving, after all these years, the mystery of where the 'Awkward Turn To The Lompon' photo was actually taken.

It's strange indeed that no one I ever spoke to about this ever made the connection between the two photos, because the truth is plain to see. That's a very distinctive group of buildings.

When we said  that we may have been looking at the picture 'the wrong way round' we were closer to the truth than we knew.

It's obvious from the above that the motorbike and sidecar combination was not in Kinderton Street at all, but in Lower Street and travelling in the opposite direction, towards Holmes Chapel.

To drive home the point, and to coin another phrase - X Marks The Spot.
There even seems to be another motorbike and sidecar combination on the bridge in this shot.

So Kinderton Street itself may not have changed its alignment very much in the sweeping changes of 1931, but, on the other side of Town Bridge, Lower Street certainly did. In fact it's still hard to get one's head around that abrupt turn off the bridge. But it has to be remembered that a section of Middlewich churchyard was removed in 1931 to enable the widening of Lower Street. Part of the Town Hall was also demolished at this time, and the building can be seen in its original form at bottom right. In the changes of the 1970s the 'Church' side of  the street was left alone, and all the demolition took place on the opposite side of the road.

At the top of the photo, Middlewich Town Wharf can be seen, seemingly in those days much more a part of the town centre, rather than being separated from it as is the case today (a situation which, we hope, will change once again when the 'Gateway To Middlewich' scheme finally comes to fruition).

All the buildings around the Town Bridge also went in 1931, of course, and the  road crossing it was considerably altered and widened.

We'll be returning to this fascinating 1928 view of our town to study other sections of it in future postings.


Very interesting stuff of course (for some of us, anyway) but we still have to find out why this particular part of Middlewich should be called 'The Lompon'. So on we go...


John Capper I'm glad that has been solved. That 1928 picture is fascinating. Looking at the position of the sidecar on the road in that picture I think confirms it was an awkward turn. It's a good job the roads were quiet then.

Dave Roberts Yes. Were there a lot more motorbike/sidecar combinations about at that time, John? Because that could explain the title. That turn from Lower Street onto Town Bridge may have been notorious among the biking fraternity, and well enough known for everyone to 'get the joke'.

John Capper. I believe there were. An alternative to the family car which would have been unaffordable to a lot of people then.