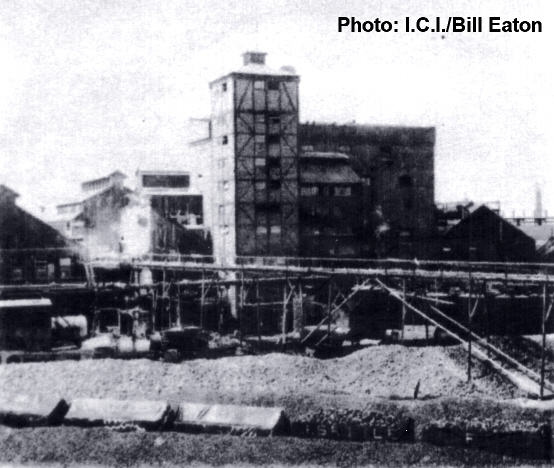 Bill Eaton has sent us this photograph of part of the old ICI Middlewich Works which he found in a book about the history of the firm.
He says, 'the camera man would be standing with his back to the lime beds looking at the back of the works'.
This site is now occupied partly by Pochin Ltd and partly by warehousing which was, between 1971 and 2000, ERF's Middlewich Service Centre (Pochin's is on the part of the site nearest to Brooks Lane, and the ex-ERF buildings are at the other end of the site, directly beneath the lime beds.
An access road called 'Road Beta' runs from Brooks Lane to the foot of the lime beds.
This is the start of the footpath which runs off in the direction of Cledford Lane and was formerly known as 'Poppityjohns'.
Bill, who worked at the ICI works in the mid-1950s,  goes on to say, 'the tall building with the decorative brickwork is the distiller building'.
Note the railway wagons in the foreground of the distinctive type used in the salt and chemicals industries, and which we saw an example of here.
According to Bill, these wagons would be 'on their way with limestone to feed the kilns'.
To enable the modern Middlewichian to get his or her bearings, we should say that the Kings Lock pub and the Trent & Mersey Canal were (and still are) directly behind the buildings in the centre of this picture.
The area is, of course, still industrial in nature and Brooks Lane has been transformed over the years into the 'Brooks Lane Industrial Estate' but, in its day, the ICI Works dominated the area in a way that is hard to envisage now, with its massive limestone crushing machinery, its tall chimneys and its many sidings full of railway wagons.
An idea of the huge scale of the works is afforded by a piece of information which Bill Eaton gives us about that rather charmingly decorated distiller building.
'For a comparison', he says, 'the distiller building was roughly the same height as St Michael's church tower.'

Bill Armsden I remember that place. There were always loud crashing noises as if stuff was being dropped down the inside of the tall corrugated building. We lived on Long Lane by the canal and that noise could be heard at our house. It was not an attractive structure at all.

Dave Roberts No it wasn't. The whole place was ugly and workmanlike. Which makes it all the more remarkable that they should go to the trouble of putting decorative brickwork on that distiller tower. For whose benefit was it? The constant crashing noises would come from the limestone crushing machinery inside the buildings adjoining the canal.