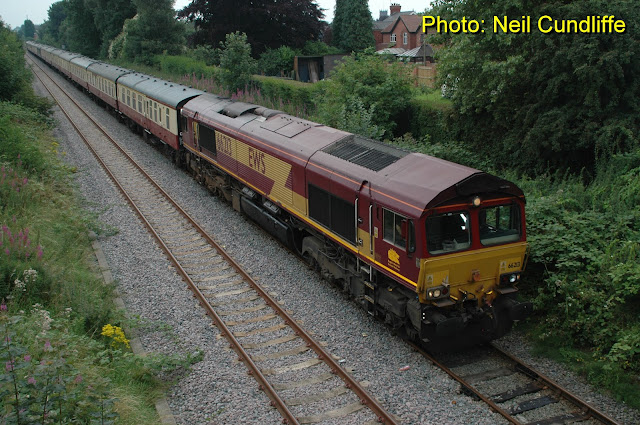 UK Railtours' special train from Basingstoke to Buxton passes through Middlewich on the morning of 11th August 2012. Our sister site, the MRLC website, features some superb photos of the train by Neil Cundliffe.


Jenny Hatton: In over thirty years I have never ever seen a train on that line - I thought it was shut!

Diane Russell: There are trains using this line every day. Mostly goods trains, but there is sometimes a Virgin passenger train, if it gets diverted.

Jenny Hatton: I may have to take some sandwiches and camp out next to it - seeing is believing!

Diane Russell: I live about fifty yards away from it, so I can see them from my kitchen window.

Dave Roberts: The shiny rails are evidence that the line's being used quite frequently at the moment. Neil, who took the photo, tells me he lives close to the line and frequently hears trains rumbling through, particularly at night.

Bill Armsden: On a quiet night with the bedroom windows open and a breeze in the right direction, I can hear trains rumbling along the track.

Diane Russell: You can more or less set your clock by them, Dave. One about 5pm most days, and then again between 10 and 11pm, and just lately there have been quite a few during the night. I have got used to them now, and it's quite nice hearing them going past, even in the night.

Dave Roberts: It brings back memories for me. When I was young and lived across the road in King Street I'd often hear trains running in the night - steam trains from 1959 to 1968 and then diesels. I sometimes hear trains in the night now, but they're mostly on the West Coast Main Line, which isn't too far away.
Posted by SALT TOWN PRODUCTIONS at Saturday, August 11, 2012