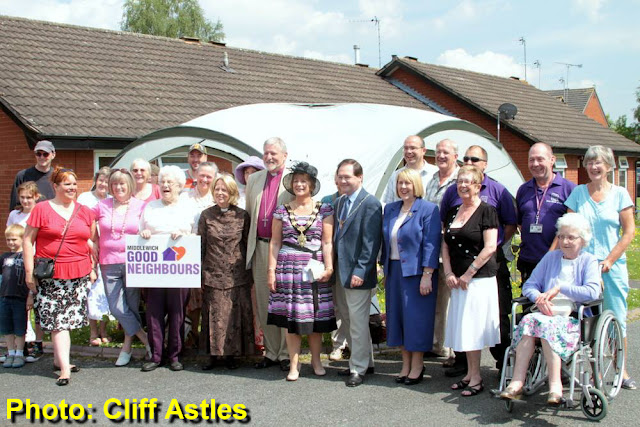 by Dave Roberts
On Saturday 8th June in Ventnor Close yet another  initiative came into being in this most community-minded of all small towns, as a pilot  for the Middlewich Good Neighbours scheme was launched.
Councillors and officials came together with church leaders and representatives of local organisations to bring the idea to life, initially in the Bembridge Court/St Ann's Road area of the town.
The aim, according to Middlewich Town Council, is to create a 'time bank' with members of the scheme sharing their time and skills to mutually benefit one another. This will not only help people with their day to day lives, but also create an opportunity for skills and knowledge to be shared among the community and help those less able to help themselves to achieve their aims. It's  another example of a local scheme designed to draw the people of Middlewich closer together.
The partnership behind this initiative includes representatives from Middlewich Vision, St Michael's, St Luke's and the Plus Dane Group.
The June sun shone down  on the proceedings as the scheme was launched and photographer Cliff Astles was there to record the scene for posterity.
Pictured in Cliff's photo are, among others, Mayor of Middlewich Cllr Bernice Walmsley and her husband Bill, Congleton MP Fiona Bruce, Thia Hughes of St Michael's, Ceri Edwards from St Luke's and Suzanne Johns who chairs the Middlewich Vision Community Action Group.
On the left is Alison Roylance-White, Middlewich Vision's Action Plan Manager
Here's a link to Cliff's photo album with more photos of the launch: GOOD NEIGHBOURS LAUNCH

Geraldine Williams...and there's so much going on in Middlewich. As an out-of-towner now I really appreciate how valuable a commodity 'The Diary' is in keeping people informed. Every town should have one....!

Dave Roberts Aw shucks...one does one's best.. I think it's wonderful how things have turned around in recent years and it's now the Keep Middlewich Miserable brigade which is out of step with everyone else.
Posted by SALT TOWN PRODUCTIONS at Saturday, June 08, 2013