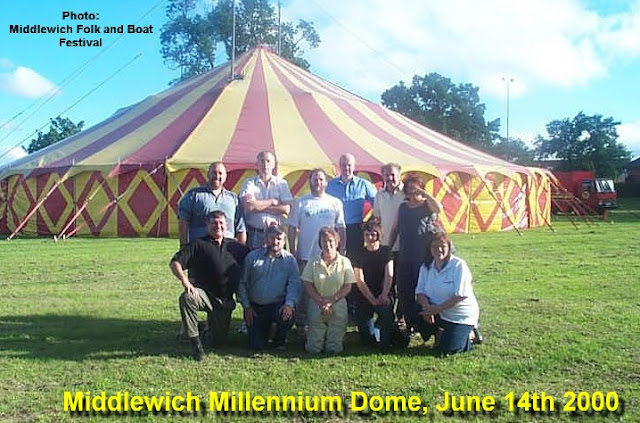 In June 2000 the Middlewich Folk & Boat Festival celebrated its eleventh birthday (it doesn't sound right, but it is) with a special 'Millennium Festival' to welcome a new century (and, yes, we did know that, officially, the new century didn't start until 2001, but sometimes you just have to go with the flow...) and to add our town's sixpenn'orth to the nation's celebration of the 21st Century.
Tony Blair's labour government was, at the time, desperately trying to convince the populace of the merits of its  Millennium Dome in Greenwich, London, and failing miserably.
The widespread view was that the whole thing was 'a waste of money'.
The exhibition, housed inside the 'Dome' itself and showing, among other things, notable British achievements, was always doomed to failure; not because of what it contained, but because of what it missed out.
The list of British inventions, ideas and institutions unrepresented was as long as your arm.
There was, for instance, and quite disgracefully, not a single mention of the railways, despite the country being the birthplace of this most civilised form of transport.
The Greenwich Millennium exhibition was open throughout the year and attendances diminished and diminished until the whole project ended in financial failure and ignominy.
Middlewich's own dome fared better.
If it looks a bit like a circus tent, that's because that's what it was.
Shrewdly, Dave Thompson  the festival's director, did a deal with a travelling circus which wanted to come to Middlewich anyway, and was able to extend the F&B Festival to include circus performances in the days running up to the weekend.
An added bonus was that the circus performers  could provide circus skills workshops for local children.
Over the  weekend the circus tent was used as the festival's main performance venue and dubbed 'The Middlewich Millennium Dome'.
I MC'd the first concert of the weekend on the Friday and the very first round of applause was for the marquee itself.
The only drawback was for photographers who, in those (mostly) pre-digital days found that every photo they took came out with either a red or yellow cast to it (wider shots, I suppose, featured a fetching mixture of the two) but all in all it was a resounding success. 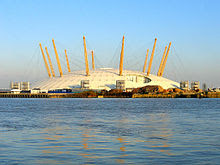 The idea of a circus marquee standing in for the 'dome' is not so far away from the original concept.

The Greenwich Millennium Dome is itself supposed to represent a large marquee covering the actual exhibition hall inside. The twelve yellow supports represent the twelve hours of the day* - a reference to Greenwich's role in international time-keeping (the meridian runs very close to the structure). The Millenium Dome was also intended to remind people of the 'Dome of Discovery' at the 1951 Festival of Britain.

In the present day the dome is part of the 02 Arena, and the white surface of the dome itself has really come into its own as a giant 'screen' on which all kind of light and laser shows can be presented.

*there are those who say that they represent, not the hours of the day, but the months of the year. Take your choice...
Posted by SALT TOWN PRODUCTIONS at Tuesday, August 06, 2013