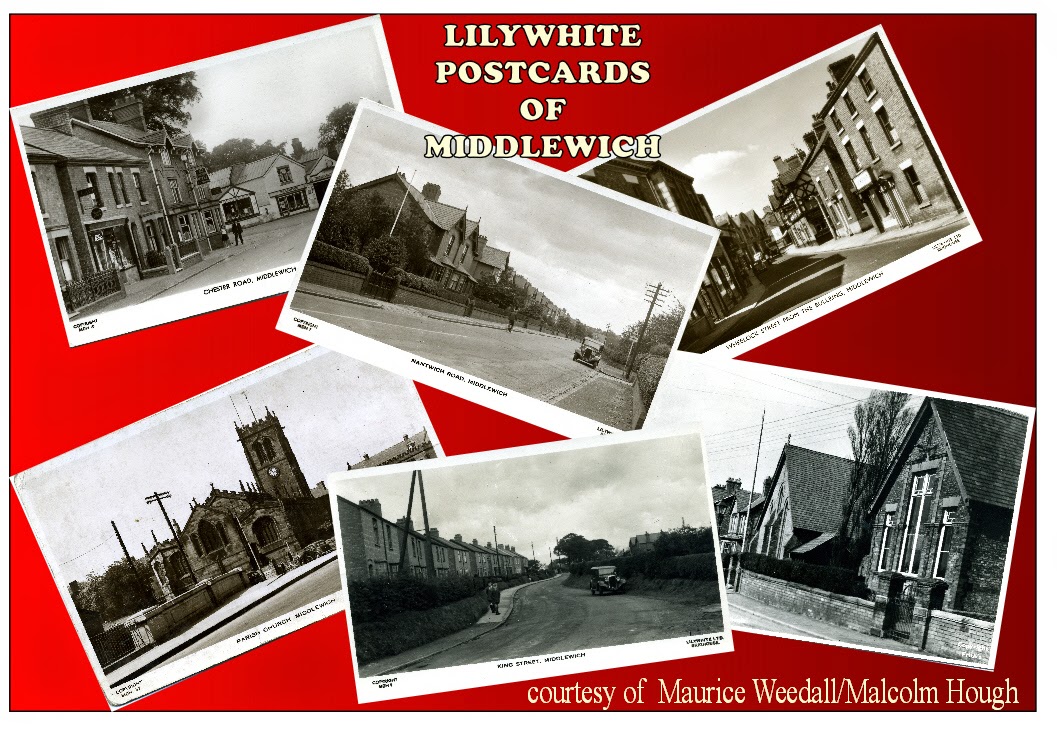 by Malcolm Hough and Dave Roberts

A friend of mine, Maurice Weedall of King’s Crescent, recently brought me six post cards to look at, featuring scenes of Middlewich.
Some we have seen before, but two of them are new to me.
What I find interesting is that five out of the six are from the well-known Lilywhite series and have the original copyright number on them. They appear to belong to the same set.
I was wondering if it might be possible to track down a full set of these cards? They are all top quality and enlarge well on the screen - Malcolm Hough

Editor's Note: Lilywhite Ltd of Brighouse were only one of many firms producing postcards of thousands of locations all over the world. Malcolm appears to be right in saying that these cards are part of a Middlewich series, as can be seen by the index numbers MDH 57/MDH 25 and so on on all but the last one, which seems to be from a different publisher. Internet searches bring up long lists of postcards from Lilywhite and other publishers, but little about the postcard manufacturers themselves. We'd be grateful for any information about this fascinating source of pictorial history. -Ed. 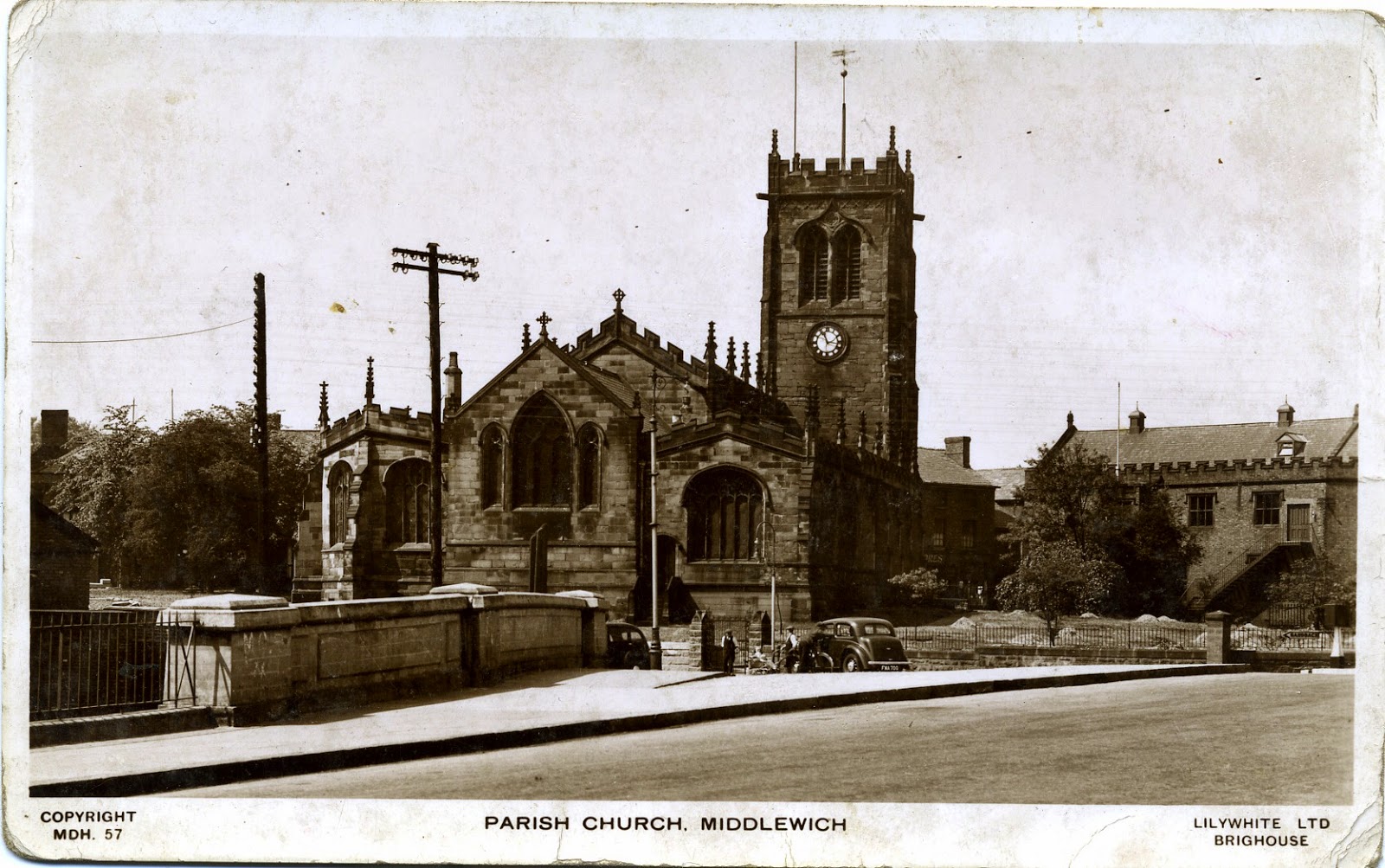 This postcard shows the Parish Church with the iron railings still in place*, and also showing railings over the river Croco (extreme left, abutting the Town Bridge parapet).
Maurice told me that in this photo, by the Church’s rear gate, one of the two gentlemen in waistcoats, is his grandfather (who died before 1944 when Maurice was born). He is probably the one pushing the trolley, or push chair. The child is Maurice’s elder brother Barry about 1940/41.
The graffiti 'artists' were also about in those days - see the town bridge wall.
Also visible in this photo are the corks on the overhead wires to stop birds flying into them, mainly the racing  pigeons which were, and still are, so popular in this and other parts of the north. Maurice thinks that the mounds in the Churchyard are freshly cut grass left to dry on a hot Summer day, possibly to supply horse feed with it being wartime. - Malcolm Hough

* which, obviously shows the photograph to have been taken  during the earliest days of the Second World War when, in common with similar railings from all over the country, they were removed to provide scrap metal for the war effort. In fact very little of the metal collected was ever used for the war effort and a lot of it, particularly in London, was quietly dumped at sea. The exercise was chiefly valuable as propaganda, making people think that they were making sacrifices to win victory. It's a pity the church's railings couldn't have been returned or replaced after the war. However, on a brighter note, Middlewich's beautifully ornate cemetery gates in Chester Road were spared and were recently restored to their former glory. (update (April 2019: Sadly, our beautiful cemetery gates were, almost unbelievably, wrecked once more by an out-of control car not long after this was written. At the time of writing - 26th April 2019 - they are yet to be repaired - Ed) To the right is Middlewich's long-vanished, and still much-missed, Victorian Town Hall -Ed. 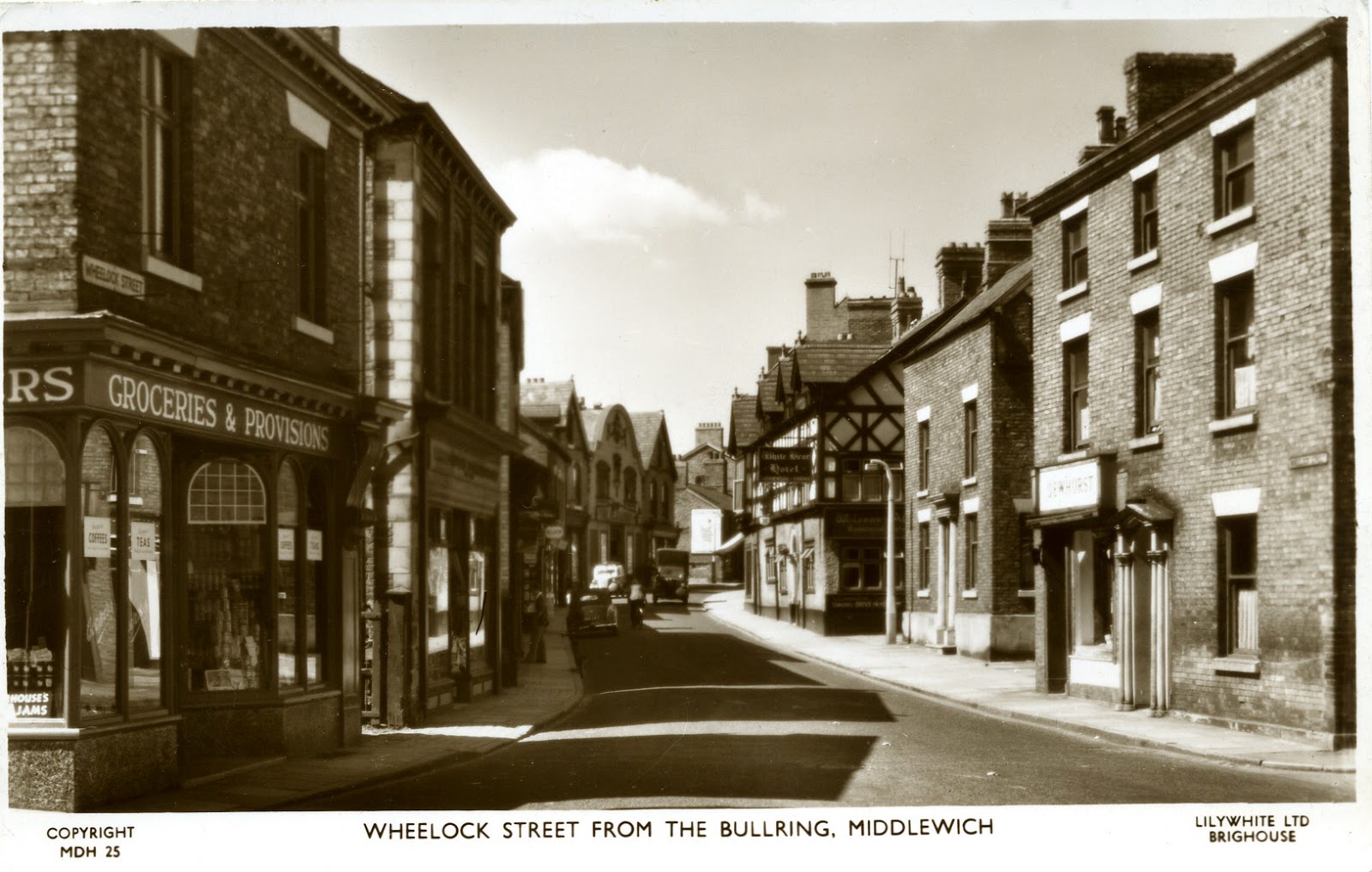 This one is very well-known and crops up repeatedly in many a collection of Middlewich pictures. It was on sale in local newsagents right up until the early 1970s for those who had taken the novel step of holidaying in Middlewich and wanted to let the folks at home know of its glories. The picture itself appears to have been taken in the early to mid 1950s.
We're standing on the other side of the Town Hall shown in the previous picture, in The Bullring, and looking along the still very recognisable Wheelock Street, the main points of reference being the now beautifully restored White Bear Hotel on the right,and, in the middle distance, the distinctive facade of the Alhambra Cinema which, despite the vicissitudes of the years, still retains all that ornamental decoration and, almost miraculously, its name.
The building on the extreme right is now the site of the Vaults car park and the building visible between it and the White Bear is now home to two hairdressing establishments and the former home of the celebrated Sharon's Cafe.
The Vaults itself is set back from the road, and lurking between these two buildings waiting for the day, many years later, when it would emerge into the open to be the first building on that side of Wheelock Street.
Out of shot on the extreme right is the start of Pepper Street, meandering away from the town centre to join Webbs Lane and giving access to Henry Seddon's Pepper Street Salt Works along the way.
The buildings on the left have now disappeared to make way for what is now Tesco Express and the former Pineland Shop. - Dave Roberts 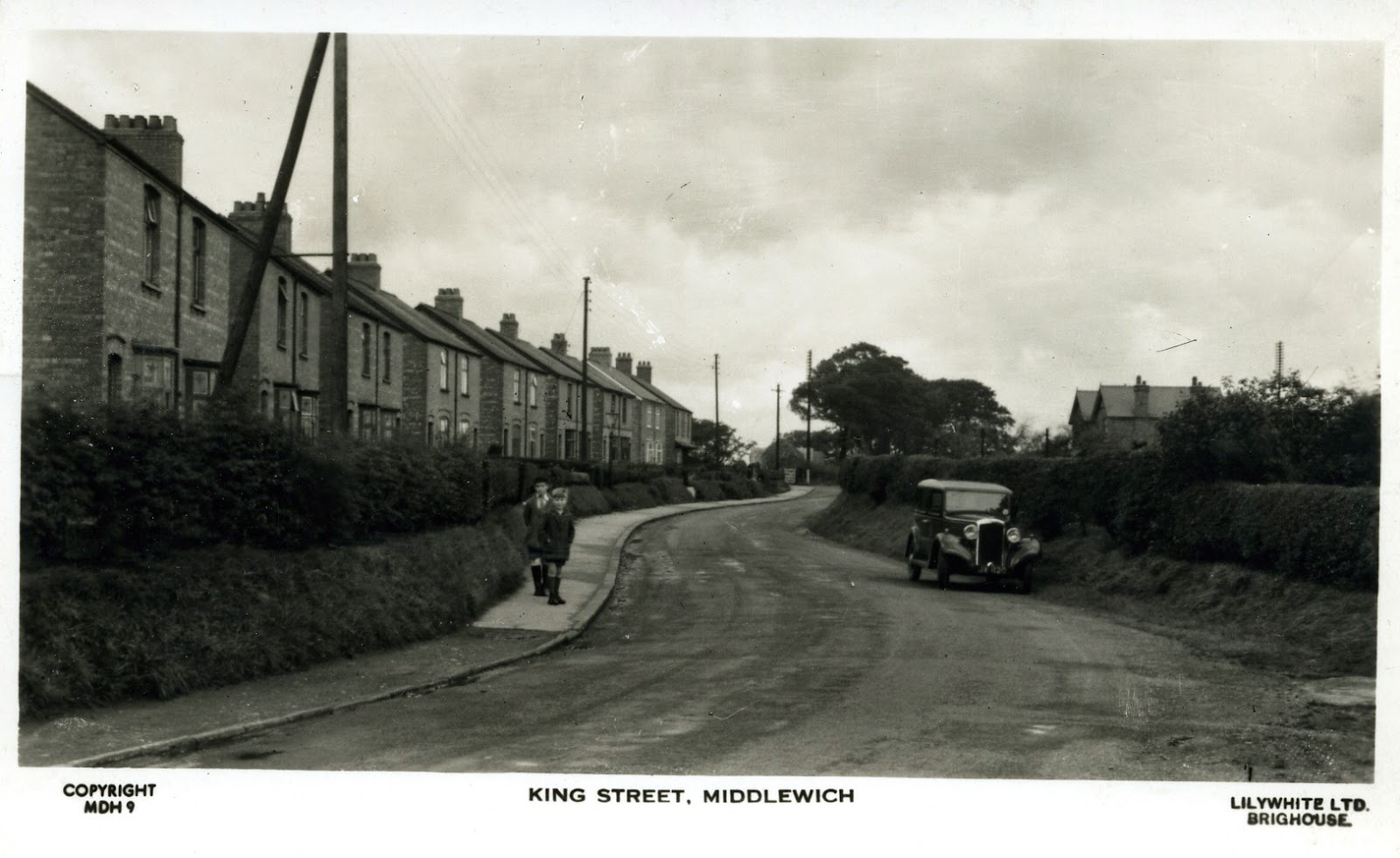 We have definitely seen this picture of King Street before, and it has featured in a previous Middlewich Diary entry, which you can see here. This is King Street, Middlewich, either during or just after the Second World War. The car looks to be of 1930s vintage but in those 'make do and mend' days may well have kept running throughout the war and beyond. The large tree, centre right, marks the spot where King Street curves to the right to cross over the railway line and then start its climb up Ravenscroft Hill. The huge poles along the left hand side of the street are part of the somewhat Heath-Robinson style electricity supply to King Street, in which the cables were strung along the street like telephone cables. The lower part of King Street even used to have wooden electricity poles which had street lights screwed to them, Part of this now antiquated system still survives.
We can date this photo as being from the 1940s by the two houses on the right, which were built by my Grandmother and my Mother's cousin Harry  in the late thirties and were the only houses on that side of this stretch of the road until building began again after the war. -Dave Roberts 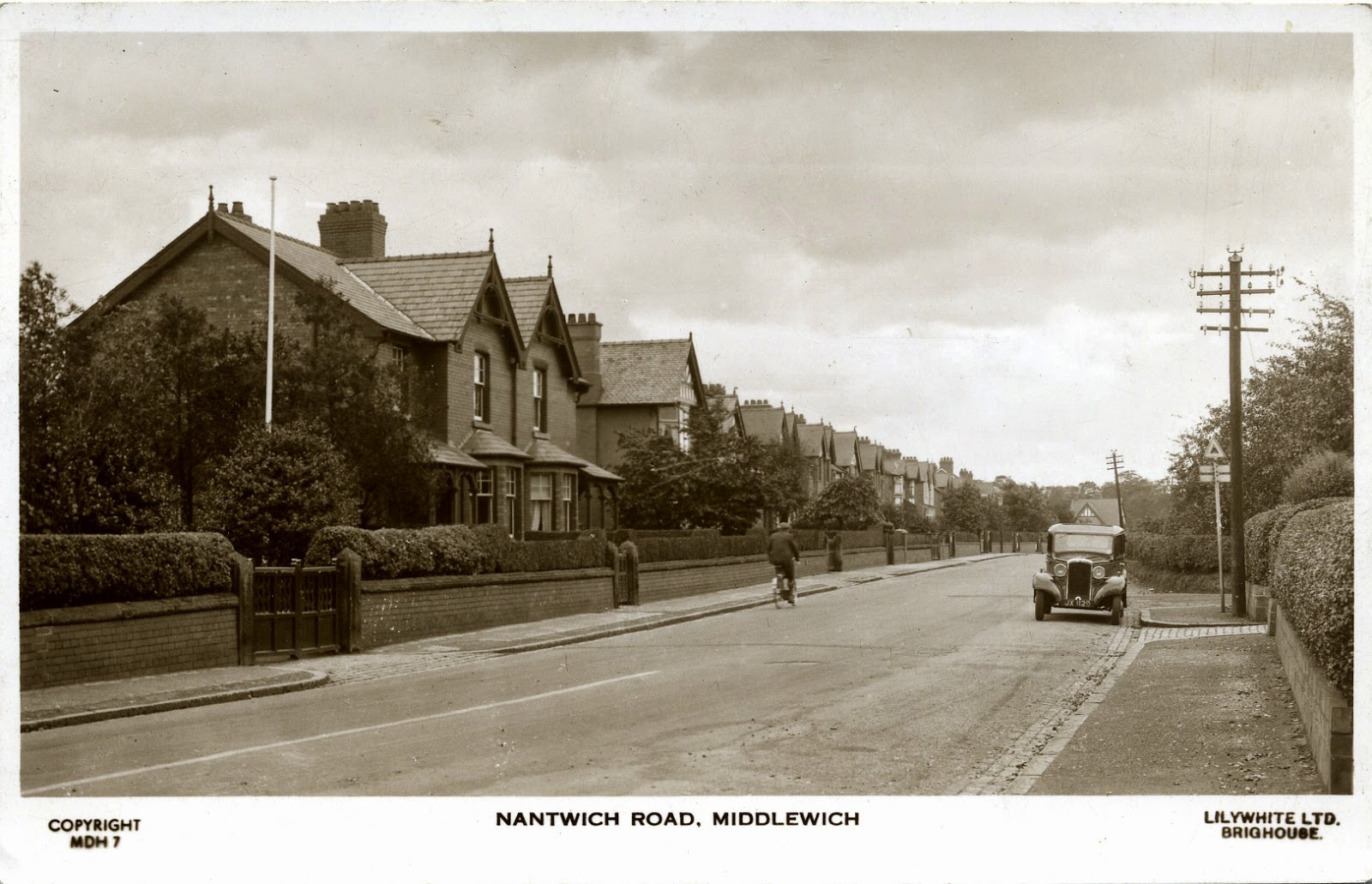 Another rather familiar postcard view, this time pure 1920s suburbia as Nantwich Road makes its genteel way down to the aqueduct. The entrance to Mill Lane is to the right. Notice the elaborate telegraph pole - just one of millions which used to line nearly every road and railway line at one time - and the small road sign; all that was necessary to control traffic in the days before the world went motor-car crazy. We think this picture dates from the 1940s. Notice how spick and span everything seems. - Dave Roberts 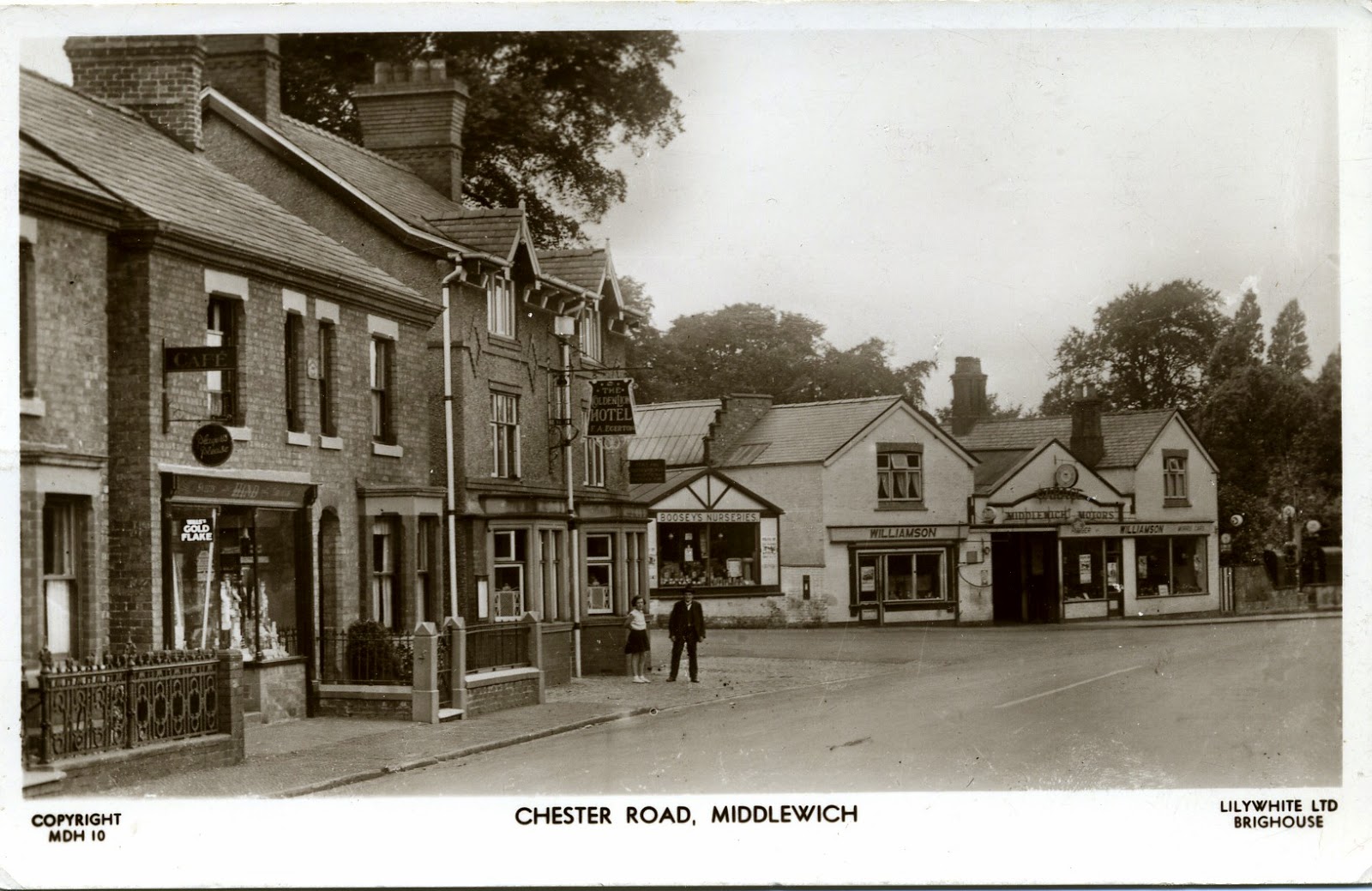 I was looking at this postcard of Chester Road and noticed that  the name of the landlord on the Golden Lion pub sign is  F. A. Egerton. According to Middlewich Hospitality, the new book by Ken Kingston,  he (Frank Egerton) was the landlord from 1929 to 1944. So as with the St Michael's photo, this one was probably taken in  the early  years of the  war, which  may explain why all the roads are quiet. It would be nice to find a full set of these postcards.
The shop with the Gold Flake sign in the window was also a cafe in those days. I remember it being a shop in the 60’s but not a cafe. - Malcolm Hough 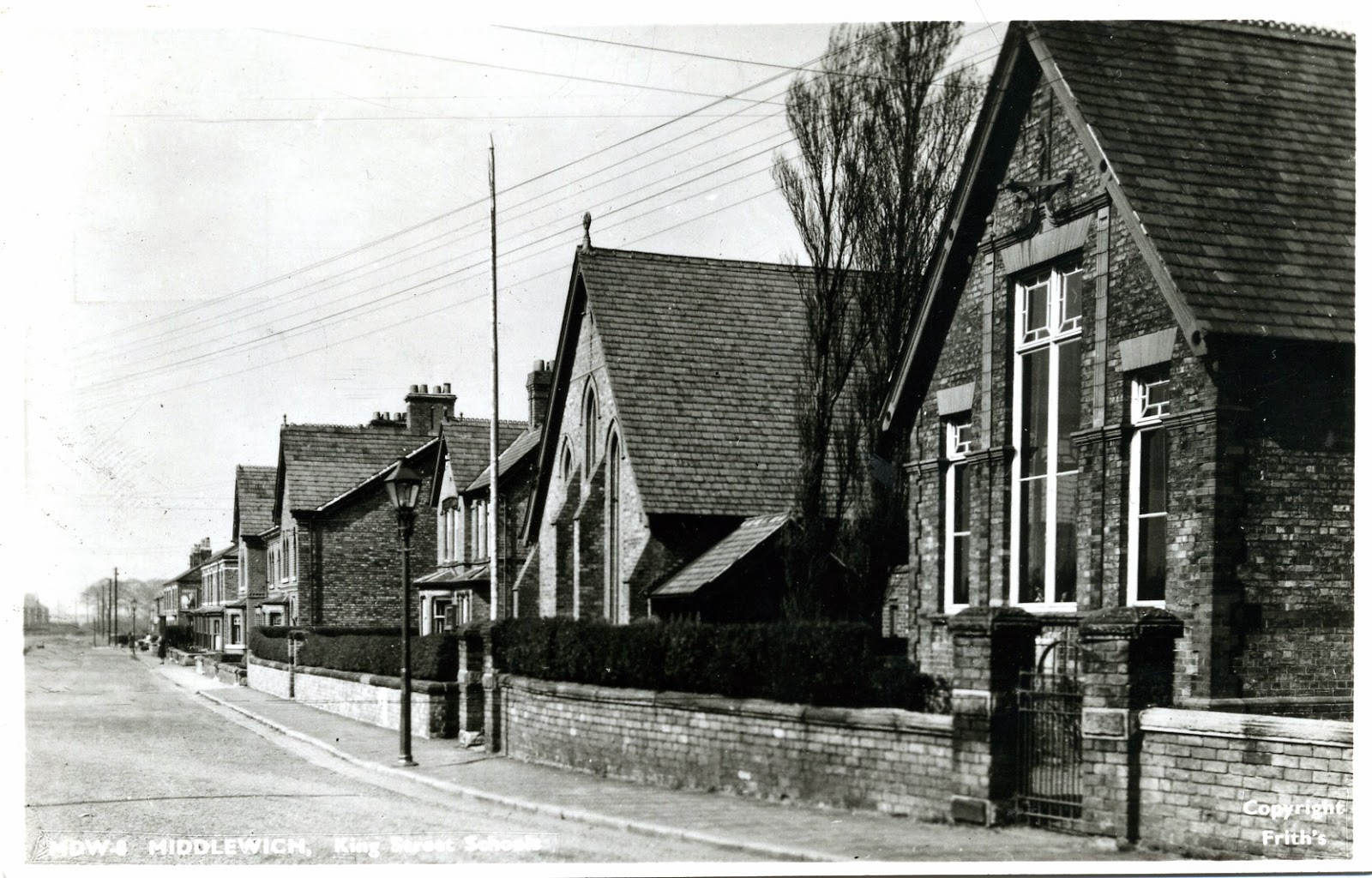 This photo is the 'odd one out' among Maurice's  postcards, as it is not  part of the Lilywhite Series. It does, though, appear to be one of a set of Middlewich cards as it bears the index number MDW4. It's titled 'King Street Schools' which dates it as pre-1920s when the 'deviation' from the original line of the road was developed and this section of King Street became 'New King Street'. The aerial view of the two roads below, which is taken from Google Earth, shows how New King Street aligns perfectly with the top part of King Street (as shown in the postcard above).Presumably the 'New' prefix was given to what is actually the old section of road so that there would not need to be a change of name as the new alignment met the old. Notice the lovely old gas lamps along the street. This scene has not altered very much over the years, although the building on the right, which was St Mary's Primary School, is now St Mary's Parish Hall. - Dave Roberts

With many thanks to Malcolm Hough and Maurice Weedall.