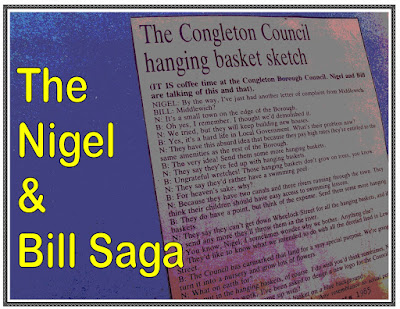 REMIND ME TO WRITE TO MYSELF...

The Nigel & Bill saga ran in the letters pages of the Middlewich Chronicle, starting with the almost legendary  Congleton Council Hanging Basket Sketch in 1985 until some time in the early 1990s when a new editor, who failed to see the joke, took over.

We're featuring these sketches not in strict chronological order, but in the order in which the cuttings come to light as we plough through the mountain of paperwork which has now been consigned to the loft here at 29 Queen Street. 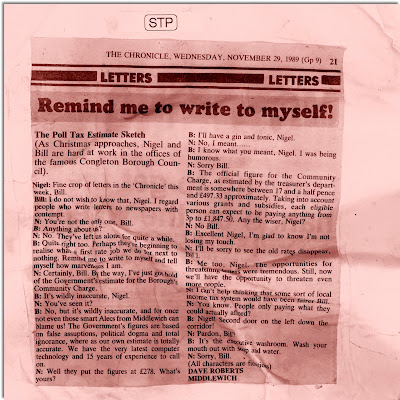 Today we've alighted on a moment in time, during a very fraught period in British politics.

We're looking at the 29th of November 1989 when The Poll Tax Estimate Sketch was published in the Middlewich Chronicle.

Mrs Thatcher's 'Poll Tax' (or 'Community Charge' to give it its Sunday name) has gone down in history as one of the most contentious, unpopular and, ultimately, unsuccessful political ideas in history.

The idea was to replace the hated local government 'rates' with a payment which everyone, home-owner or not, would have to pay.

It sounds, in principle, a lot fairer.

But, in practice, the levying of a 'flat-rate' tax on everyone, regardless of income, meant that the burden of local government finance was shifted from property owners to people who, in many cases,  could ill afford the new charge.

People who had nothing were expected to pay the same as those who owned property worth millions of pounds.

The idea was tried out in Scotland in 1989, where it proved to be wildly unpopular, and so, inevitably, was extended to the rest of the country the following year.

The 'Poll Tax Riots' which followed are a part of history and led, eventually, to the replacement of the 'community charge' by the Council Tax in 1992.

So here we are at the end of November 1989, with the introduction of the Community Charge in Congleton Borough imminent.

Our heroes, Nigel and Bill, are considering the latest 'crop' of letters in the local Chronicle and thinking about the forthcoming introduction of the new 'Community Charge':

(As Christmas approaches, Nigel and Bill are hard at work in the offices of the famous Congleton Borough Council)

Nigel: Fine crop of letters in the Chronicle this week, Bill.

Bill: I do not wish to know that, Nigel. I regard people who write letters to newspapers with contempt.

B: Anything about us?

N: No. They've left us alone for quite a while.

B: Quite right too. Perhaps they're beginning to realise what a first rate job we do for next to nothing. Remind me to write to myself and tell myself how marvellous I am.

N: Certainly Bill. By the way, I've just got hold of the Government's estimate for the Borough's Community Charge.

B: It's wildly inaccurate, Nigel.

B: No, but it's wildly inaccurate, and for once those Smart Alecs from Middlewich can't blame us! The Government's figures are based on false assumptions, political dogma and total ignorance, whereas our own estimate is totally accurate. We have the very latest computer technology and fifteen years of experience to call on.

B: I know what you meant, Nigel. I was being humorous.

B: The official figure for the Community Charge, as estimated by the treasurer's department is somewhere between seventeen and a half pence and £497.33 approximately. Taking into account various grants and subsidies, each eligible person can expect to be paying anything from 3p to £1,847.50. Any the wiser, Nigel?

B: Excellent Nigel. I'm glad to know I'm not losing my touch.

B: Me too, Nigel. The opportunities for threatening letters were tremendous. Still, now we'll have the opportunity to threaten even more people.

N: I can't help thinking that some sort of local income tax system would have been fairer, Bill. You know, people only paying what they could afford...

B: Nigel! Second door on the left, down the corridor...

B: It's the executive washroom! Wash your mouth out with soap and water!

(All characters are fictitious)

Email ThisBlogThis!Share to TwitterShare to FacebookShare to Pinterest
Labels: 1989, NIGEL AND BILL, POLL TAX, THE COMMUNITY CHARGE, THE NIGEL AND BILL SAGA