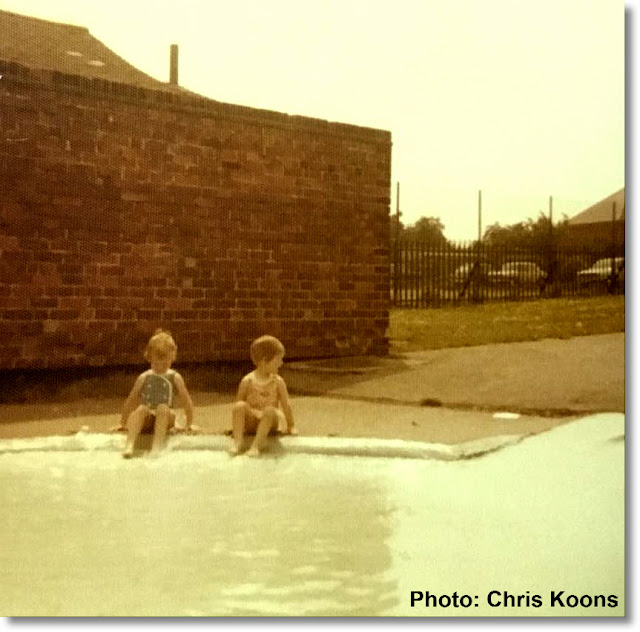 Photographs of the paddling pool which once lay behind Fountain Fields are very rare indeed.
In fact it's very often forgotten that the  facility ever existed.
Chris Koons, who now lives in America with her family, but was in a former life Christine Sant, daughter of David and Miriam Sant of King Street,  has kindly sent these precious snapshots showing the pool in around 1973 or 1974. That's Christine in blue on the left, with her sister Karen. The spot where they were playing all those years ago is now the private access road which runs alongside Fountain Fields to Wallcroft Gardens and ultimately to Wheelock Street.
The pool was behind the still existing 'bowls hut' (or 'putting hut') on Fountain Fields, now used as a base for Cheshire East's maintenance workers but at one time the place where you would go to hire bowls, golf balls and putters to enable you to  use the Fountain Fields amenities.
In my first job, with the Middlewich U.D.C. (1969-72) one of my duties was to visit the hut and collect the pennies and half-pennies which locals had paid during the week, and take them back to the office.
You can see the roof of the building on the top left of the photo. There were at one time public toilets behind the brick wall, and the pool, together with a children's slide, were in a sort of 'annexe' to Fountain Fields, reached by a gate alongside the bowls hut. To try to get our modern-day bearings, we can point out that the building on the extreme right is the present-day High School Drama Studio (originally the school gymnasium). And now we come to one of those little mysteries which infuriate and delight us all. To the right of the brick wall should be what were at the time the tennis courts on Fountain Fields*, and the uprights for the wire netting seem to be present and correct. But why are those cars parked there? The access road to the car park and supermarket is not in place yet (and neither are the car park and supermarket, come to that). Beyond the tennis courts, certainly until the late sixties, was the  putting green which, along with bowls and tennis, was the sum total of  Fountain Fields' attractions until more recent times. So where do those cars fit in? All information, as always, gratefully received.

*one of the tennis courts survives in modified form as a  five-a-side football/basketball court. 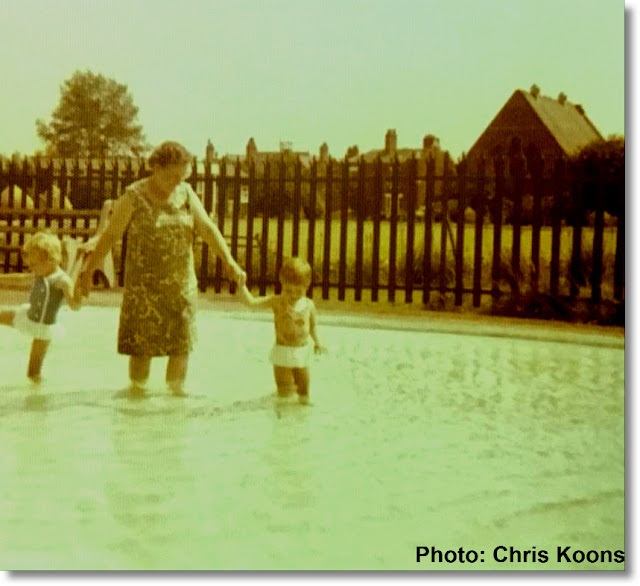 And here are Christine and Karen again having a paddle with their Grandma, who was visiting from Manchester. Behind them is the original spiked fencing, which was first modified to avoid injuring would-be trespassers and then replaced completely about twenty years ago. Beyond the fence is the bowling green, which has just been replaced by all that lovely children's playground equipment, and beyond that can be seen the Congregational Church (the 'Congs') in Queen Street, now known, of course, as the United Reformed Church. The building looks very much the same today,except that the Victorian ventilators on the roof have disappeared. Two doors away the top of the original Middlewich Police Station can be glimpsed.
If you look directly behind Grandma, you can just make out a wooden building. This was the original France-Hayhurst clubhouse later replaced, following a fire, by the modern brick building next to the 'bowls hut'.

Many thanks to Chris for giving us the chance to show you these photos of a long-vanished Middlewich attraction. If you have any photos of this, or any other, Middlewich scene from the past, or can add to the information in this Diary entry, please don't hesitate to get in touch. For example, was the slide the only facility on the site, apart from the pool, or were there also swings there? Can you remember? 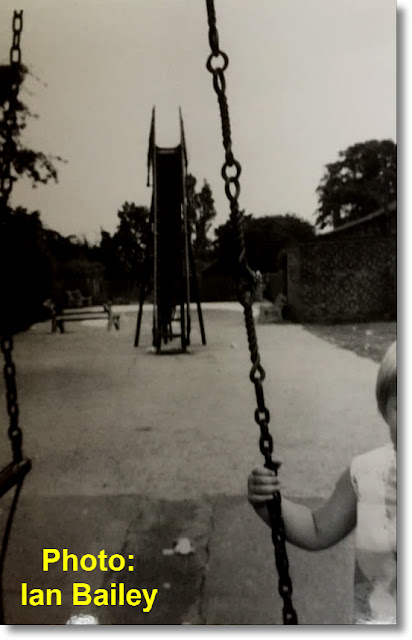 - and here's the proof that there were indeed swings and a slide on the site in those days. The paddling pool was beyond the slide seen here.
Photo added 1st December 2018.

Update: See the Facebook Feedback below. It's obvious that the 'annexe' to Fountain Fields was a fully-fledged children's playground in its own right, complete with paddling pool and separate from the Fountain Fields main site. It was only in later years that the playground equipment began to encroach on the main site (necessitated, no doubt by the sale of the land where the paddling pool and other playground equipment once stood). I myself was a young man in my twenties in the early seventies, and not interested in children's playgrounds, which explains why I can't remember how things were. Many thanks to everyone for their memories. 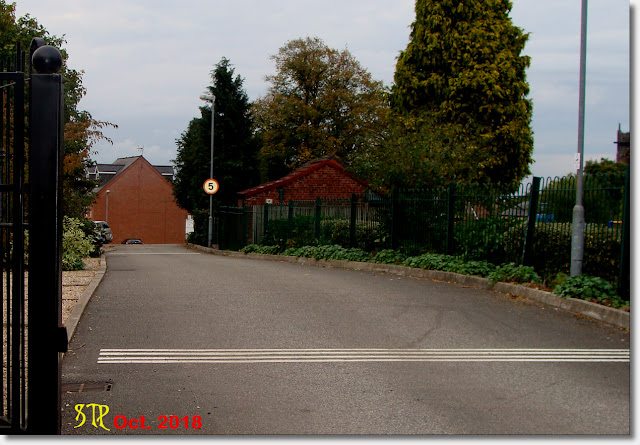 The same area in October 2018. The access road to Wallcroft Gardens now runs through the site of the playground. The brick building in the centre of the picture identifies the site.
Photo added 1st December 2018

Chris Koons I’m pretty sure there were swings there, too, and another access gate to the annexed area via a gate from the alleyway close to Nana Dean’s.
Also, the putting green was still in operation in the mid-late 70s because I remember playing on it when I was seven or eight, and I was born in 1969.

Gaynor Smallwood There were two big swings at the top, together with two baby swings, then the big slide. The paddling pool was at the bottom. On the grass was the roundabout and a big red horse that rocked. I spent every day in the summers of 1975 and 1976 on the park. The boys (Steve Smallwood, Alan Bowker and John Price) would get us girls at the top and run us down into the pool! We would need to change into dry clothes three or four times a day! Happy, hot days, with no worries.

Anita Hough I remember the paddling pool too. It was the mid eighties, as that's when we moved to Middlewich. It wasn't filled that much then which was a shame. I remember the swings, MASSIVE slide and the dreaded roundabout that we used to make ourselves dizzy and almost sick on. The access gate is still there near Nana Dean's. The bowling green was still used in the mid eighties as well, as I remember sitting watching them play and being fascinated by it.

Sylvia Burrows I used to take both my children there when they were little. They really enjoyed it!

Jayne Latham There were two swings and a baby swing. Then a rocking horse that would head butt you if you went too fast and had about 6 seats on it. Then that steep slide that used to get greased with bread paper so you would slide quicker and if you were unlucky you would end up in the pool.
I am sure the other end of the very slippery pool had a two-tier concrete fountain on it. This was removed as the kids would climb onto it, so it wasn't safe. Then you would run through the gate behind it and run right through the gardens to the toilets either side of the putting hut, as we called it. The best person to tell you all about this is Alan Sant, who lived across the road from the school on King Edward Street. His Mum, Joyce, who was the school cleaner, said he played in that pool in any weather in all his clothes! I'm going back over fifty years, now. Thinking back, the original toilet was in the hut. The other toilets were added years later. There was a big greenhouse looking at the right hand side of the hut. Also there was a sunken garden to honour someone or something - sorry, not sure who or what* Good memories.

*This would be the France-Hayhurst family. The sunken garden is still there, but rather neglected. Ed.

Lynda Lever I moved to Middlewich in 1988 and had my kids in 1992 and 1994. I vaguely recall there being a small playground area and pool, though I'm not sure if the pool actually had water in it. I don't recall my son actually going in it, but perhaps he was too small.

Jacky Connell Cottam I remember it very well. I used to go there often, but sorry - no pics!

Susan Johnson I remember it well. I used to spend weekends and school holidays there all the time in good weather.  |Many families took picnics and spent all day there. The park was always packed. The putting green and tennis courts too. Also the bowling green and the hut they used. There used to be an attendant in the building next to the toilet block.. You could hire putting clubs, tennis rackets etc. Happy days and happy memories.

Tim Morton I remember slipping over and hitting my head on the floor of this pool.

Pete Berry I've still got the scar on my chin! It had a bit of a divot in it. Turned the pool red! My parents still have photos of the pool. I remember seeing them a few years ago. I'll ask them if they can try to find them.

Barbara Cooper I remember this pool. My Mum and Auntie Freda used to take our daughters Louise and Angela  there. Happy days!

JULIE CORT has pointed out that there was a similar paddling pool in one of the childrens' playgrounds in Cledford. Does anyone have any photos of this pool?